How to Build the Machine That Will Find Another Living Earth 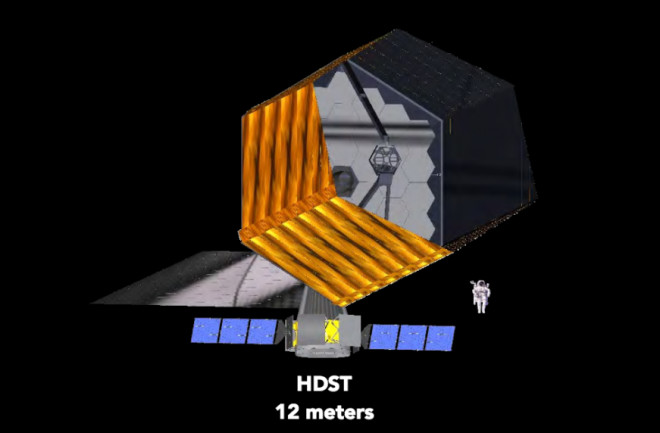 Conceptual illustration of the High Definition Space Telescope gives a sense of its enormous size, necessary to zero in on the exceedingly faint glow of another Earth. (Credit: STScI/AURA) The 20-year stretch since the discovery of the first exoplanet—a planet circling a star other than the sun—has seen a wholesale relocation of cool ideas from science fiction over to science fact. By 1999, scientists found a way to study the composition of exoplanets. By 2004, they identified a rocky planet, broadly similar to Earth in structure. By 2014, they tracked down an Earth-size world that is the right distance from its star for liquid water. The Star Trek vision of a galaxy full of habitable planets doesn’t look farfetched anymore. Despite that remarkable progress, we are still far from answering the big question: Is anybody (or anything) out there? What we all want to find is not just an Earth-size world, or an Earth-temperature world, or a vaguely Earth-like world. We want to find Earth 2.0: a wet, warm, living, breathing planet just like our own. To do that, we need to go far beyond the search techniques that astronomers have used so far. There needs to be a more ambitious plan. And there is. The huge limitation of the current research is that all of the Earthlike planets seen so far have not really been “seen” at all. We’ve detected their gravity or their shadow, but have not directly glimpsed the planets themselves. One of the standard search techniques, called the Doppler method, measures the back-and-forth motion of a star caused by the gravity of its planet. The main alternative approach, the transit method, measures the slight shadow created when a planet passes in front of its star as seen from Earth. Together, these two techniques have located some 5,400 likely exoplanets and delivered the first meaningful census on the varieties of solar systems out there. Unfortunately, neither technique can tell you much about those planets beyond the gross details of their orbital periods and their sizes or masses. For Earth-size planets, we know virtually nothing about their atmospheres or surface compositions. To understand the importance of such details, you need look no farther than the nearest planet, Venus. It is almost identical to Earth in size and density, and it orbits a reasonable distance from the sun--which is, of course, a very reasonable star. We would unquestioningly classify it as a “potentially habitable” planet based on the kinds of information we can now glean about worlds around other stars. In reality, Venus is a 900-degree F, sulfur-cloud-choked hellhole. (See my recent post about the mysteries of Earth’s wayward twin.)

How to distinguish a hellish Venus from a lush Earth: The answer is right there in the spectrum, if only you can gather enough light to study it. (Credit: Venera 14, Wikimedia Commons, A. Roberge/HDST) If we want to track down Earth 2.0, we need to know more. We need to know if there is water and oxygen, if there are seasonal changes, if there are molecules associated with biological metabolism, such as methane. To get that kind of information, we need to bring Earth-size exoplanets directly into view, separate from their stars. Then we need to collect enough reflected light off the planet alone that we can run it through a spectrograph and look for those telltale patterns and chemical signatures. And, let me tell you, it ain’t easy. An Earthlike exoplanet would be about 10 billion times fainter than its star, and the two would appear right next to each other in the sky. Astronomers working on the problem liken it to trying to spot a firefly perched on the edge of a searchlight. The only way you’d have a prayer of bringing it into view is by blotting out the light of the star so you can focus exclusively on the planet’s feeble glow. So of course that is exactly what researchers are trying to do. Idea #1: Stick a mask in your telescopeJohn Trauger at NASA’s Jet Propulsion Laboratory knows a thing or two about optics tricks, having lead the design of the wide-field camera that fixed the Hubble Space Telescope’s blurry vision back in the 1990s. He is now directing the design of a device called a coronoagraph. The engineering details are quite complex, but the core idea is simplicity itself: You build a little light-blocking mask into a telescope so that it creates an artificial eclipse of the star. Coronoagraph technology works; similar devices have been used for years to observe the outer atmosphere, or corona, of the sun (hence the device’s name). Achieving the necessary clarity is the hard part. Today’s best coronagraphs achieve a contrast of 10 million to one. Trauger needs to improve on that by a factor of 1,000. In ongoing lab tests at JPL, Trauger and his collaborators have achieved billion-to-one contrast. They are getting close, and soon they may get a huge real-world trial. NASA’s WFIRST space telescope (Wide-Field Infrared Survey Telescope), tentatively planned for launch in the early 2020s, is slated to include a coronoagraph as one of its built-in instruments. “There is no prototype space test—flying on WFIRST will be our test,” Trauger says with the confidence or a battle-tested NASA engineer. But WFIRST is still not the true Earth-finder. That job will fall to a much grander space telescope: something like the High-Definition Space Telescope concept unveiled recently at the American Museum of Natural History in New York. HDST would be a true, quantum-leap successor to Hubble, designed around a 12-meter (39-foot) mirror that could collect 25 times as much light. It would have a built-in coronagraph, and would be designed from the start as bloodhound for other Earths. Not only would it detect them directly, it would then split up their light into a rainbow spectrum so as to sniff out their composition.

Simulated view shows how the HDST + a coronograph combo would see our solar system if it were transported to a nearby star. (Credit: L. Pueyo, M. N’Diaye/STScI) Sara Seager of MIT, a leading exoplanet researcher, expects HDST could measure “dozens of exo-Earths,” distinguishing the true Earths from the Venus types, along with whatever other, unforeseen kinds of strangeness may be out there. Now we are getting somewhere…and yet this is still not the end of the journey that Michel Mayor and Didier Queloz began 20 years ago this month. Coronagraphs have their own limitations, you see. Creating a miniature eclipse inside the telescope steals some of your precious light and, worse, it allows only a narrow field of view. Those flaws restrict the places you can look for Earth 2.0, and they make it difficult or impossible to assess the whole surrounding planetary system. Idea #2: Create an artificial eclipse in space There is another solution waiting in the wings: Instead of creating an eclipse inside the telescope, block out the starlight on the outside, an approach that Seager has long championed. Jeremy Kasdin at Princeton University is leading the design of this starshade technology. “We know how to do it. There are no technical hurdles. The hardest part, actually, is testing it,” he says. He’s working on that now, building a miniaturized version in his imaging lab. The starshade concept sounds disarmingly like a science fair project gone mad. You fly a petal-shaped disk about a thousand kilometers in front of your telescope. You align it in front of a desired star and you hold it in place it to an accuracy of about 1 meter. And then—voila!—when you look through the telescope you see the surrounding planets but no blazing-bright star in the middle. In principle, a starshade is the most efficient way to collect and analyze the light of another Earth, and it places no restrictions on your ability to scan all of the other planets around it. The big problem is propellant: “You need a rocket to move the starshade from target to target,” Kasdin notes. Depending on where your target stars are located, it might take days or weeks to reposition the shade appropriately, and at some point you’ll run out of fuel to keep nudging it around.

Starshade concept has a unique petal shape designed to maximize the blocking of starlight so that Earthlike planets pop into view. (From Jeremy Kasdin's TED talk.) The ideal solution, Seager notes, is to do it all. Build the HDST, or something like it. Put a coronoagraph inside, which will allow it to scan many different stars for Earthlike planets. Identify the best candidates. Then move your starshade in place for the clearest possible view. Nobody will yet put an official timetable or price tag on such a mission, since it is still just a concept, but I’m not bound by such political considerations. The High-Definition Space Telescope, with all the bells and whistles, will cost about $10 billion in current dollars, and it could begin actively scanning for Earth 2.0 by 2035—40 years after the discovery of 51 Peg b. It would be a huge undertaking, comparable to the cost of other big-science projects like the Large Hadron Collider, the James Webb Space Telescope, and the Human Genome Project. But keep in mind that exoplanet studies would be only one part of what HDST could do. It would explore the distant universe, tracing out our cosmic origins; it would act as a virtual space probe, providing sharp new views of the outer planets and their moons. It would have a big-science price tag because it would be a really big big-science machine. What could be more revolutionary than the discovery of the first exoplanet? How about the historic discovery of another Earth, with evidence of oceans and life? Now that would be a truly worthy 40^th anniversary present. Follow me on Twitter for more space and astronomy news: @coreyspowell