How to Avoid Repeating the Debacle That Was the Space Shuttle

It promised the moon but delivered low Earth orbit at exorbitant cost. And it’s partly your fault. 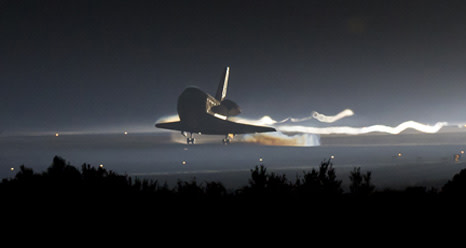 Now that Atlantis is safely on the ground and astronauts will never again face the risk of flying in a space shuttle, maybe we can at last take a clear-eyed look at this disappointing episode in our nation’s history. This isn’t purely a historical exercise but a practical one—a cautionary tale showing how to avoid repeating the same mistake we made with the shuttle. When I say “we,” I don’t mean the people working on the craft, or NASA, or even our representatives in the U.S. government. I mean the society as a whole—from the reporters who obsessively covered the incessant launch delays, to the scientists who demeaned anyone who questioned NASA’s budget, to the teachers who spoke about it in admiring tones to their students. In the descent of our manned space program into stultified irrelevance, we’re all a little bit complicit.

The most important thing to realize about the space shuttle program is that it is objectively a failure. The shuttle was billed as a reusable craft that could frequently, safely, and cheaply bring people and payloads to low Earth orbit. NASA originally said the shuttles could handle 65 launches per year; the most launches it actually did in a year was nine; over the life of the program, it averaged five per year. NASA predicted each shuttle launch would cost $50 million; they actually averaged $450 million. NASA administrators said the risk of catastrophic failure was around one in 100,000; NASA engineers put the number closer to one in a hundred; a more recent report from NASA said the risk on early flights was one in nine. The failure rate was two out of 135 in the tests that matter most.

It seems likely, in retrospect, that the project was doomed for a variety of reasons, including the challenging reusable spaceplane design and the huge range of often conflicting demands on the craft. Tellingly, the U.S. space program is abandoning spaceplanes and going back to Apollo-style rockets. The Russians have always relied on cheaper and more reliable disposable rockets; China plans to do the same. But hindsight is 20/20, and there may well be no way NASA could have known that the shuttle would flop back in the ‘70s when it was being planned and built, or possibly even while it was flying in the early ‘80s, before its bubble of innocence was pricked by disaster. But it would soon become clear to anyone that the shuttle program was deeply troubled—at least, to anyone who bothered to look.

According to reports after the Challenger disaster, the ship exploded because of a faulty joint that included an O-ring hardened by especially cold conditions before launch. More importantly, this was far from an isolated problem, as illustrated by a report by Richard Feynman. Feynman slammed not only the O-ring error but the entire process of building and testing the shuttle, plus the management style and decision-making of NASA, for good measure. When he wrote, “Let us make recommendations to ensure that NASA officials deal in a world of reality,” and, “They must live in reality in comparing the costs and utility of the Shuttle to other methods of entering space,” he meant they were at the time not living in reality, which is generally the place engineers ought to live. NASA’s recent report on shuttle safety found that the chance of making it through first 25 flights (#25 being Challenger’s last flight) was only 6%, and the chance of 88 safe flights between the Challenger and Columbia disasters was just 7%. If the study is accurate, then Challenger and Columbia weren’t freak accidents—the flights before them were freak successes.

So it was clear, as far back as 1986, that the shuttle was an objective failure judged by its own goals. The launches were already way over budget and behind schedule; now a Nobel physicist was comparing its safety standards to Russian roulette’s.

The shuttle also failed a more basic, primal test: it’s just not that cool. The major point of putting humans in space is to explore. (If you want to do science, it’s orders of magnitude cheaper to send robots, like the phenomenally successful Mars rovers Spirit and Opportunity, which are nearly universally described as “plucky.”) But the shuttle is, in broad stokes, repeating steps that were successfully taken in the mid-60s. It does do a lot of things that the Mercury astronauts could only dream about. But these are more technically impressive feats than the kind of imagination-capturing successes of the 60s, which has led to the Americans becoming increasingly bored with the space program. Ask anybody who was never tempted to go to Space Camp what the shuttle’s accomplished since fixing the Hubble in 1993.

Perhaps worst of all, the shuttle not only failed its own mission but prevented NASA from doing much else. The shuttle was a flying money pit that prevented us from launching vastly more efficient programs, like the Mars rovers, and even other attempts at manned flight. The current boom in private spacecraft designs (for example) shows the kind of inventiveness and flexibility that NASA could have practiced or at least funded for the past few decades if not for the shuttle.

So even after the Challenger disaster, Feynman’s savaging of the program, its long slide into lameness, and its embarrassing hogging of the spaceflight spotlight, why couldn’t anyone stand up to the shuttle and admit it was a noble effort that just didn’t work out? After watching the reaction to the final launch, I think I get it.

The lead-up to the last shuttle flight provoked a great outpouring of misplaced nostalgia, awe, admiration, and trepidation. Space aficionados are particularly upset that the U.S. now has no way to put people into orbit. (Instead, we’ll have to bum rides on the old, cheap, and dependable Russian Soyuz, which is galling not only because it highlights what a flop the shuttle was, but also because the space program still has an anachronistic whiff of the Cold War about it. Our borrowing the Soyuz is like Rocky asking Ivan Drago for a lift because he backed his Thunderbird into a Dumpster.) While it’s nice to see that people care so much about space and putting humans up into it, they’re missing the fact that we needed to drop the shuttle to make any real progress—the sooner the better. Moreover, these reactions illustrate exactly why we couldn’t cancel the shuttle decades ago, as we should have.

Long before the space shuttle actually existed, it became much more than a machine to bring stuff and people to space, a tool that could be swapped out for a more effective tool. To militarists and politicians, it (this national phallus) symbolized our might; to science fans, American discovery; to kids, fantastic space voyages; to NASA, a fat paycheck and national prominence; to the media, a feel-good, patriotic story to sell; and to the country as a whole, some combination of the above. The responsibility for instantiating this national fantasy fell squarely upon NASA. And when it became clear to realistic observers that the shuttle was a failure, NASA hid from that reality, as Soviet scientists did under Lysenko’s political pressure. The agency couldn’t face up to telling the nation that the embodiment of our shared dream was screwed up, and we had to start over. But NASA wasn’t playing the denial game alone: it was enabled by a country full of people who accepted the fantasy that the shuttle was a great national success.

So as we prepare to mothball the shuttles and send them off to their dotage at various museums, don’t be sad about the end of the program; instead think of where could have been now if we’d cancelled the thing 25 years ago. And make sure our future spaceships are based in and judged from this spot called reality.

This essay represents the views of the author, not DISCOVER.