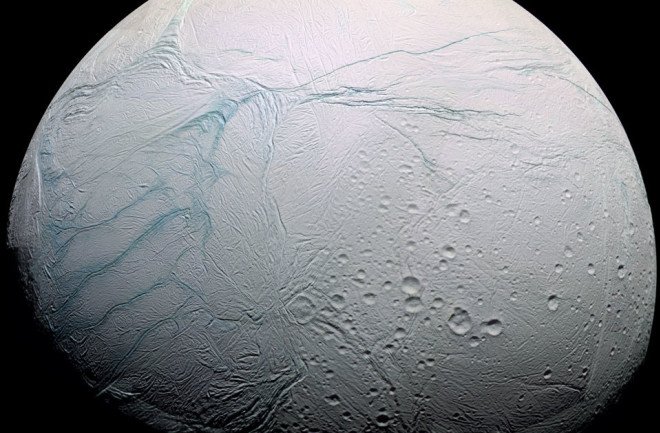 Saturn’s icy moon Enceladus sports a series of parallel, evenly spaced stripes at its south pole. Scientists believe these stripes are long fissures in the icy shell that covers the moon's subsurface liquid water ocean. But astronomers still aren’t sure how these fissures formed, why they’re so evenly spaced or why other icy worlds don’t have them.

Now, a team of researchers has proposed an explanation that could account for all the major questions about this series of fissures. The team published their findings Monday in the journal Nature Astronomy.

Scientists discovered the stripes when the Cassini mission to Saturn noticed something unusual at the moon’s south pole. Plumes were erupting along a series of features that researchers dubbed “tiger stripes.”

"People have been interested in this ever since that was discovered, and it's been in kind of the back of everyone's mind," said Douglas Hemingway, a planetary scientist at the Carnegie Institution for Science and an author of the new study. "What exactly are these things? Why do they form?"

Read More: The Enigma of Enceladus

In the past, researchers proposed that a long fissure could have formed as more ice built up on the moon’s shell, putting the liquid ocean below under more pressure and forcing the shell to fracture. The ice shell of Enceladus is thinnest at its poles, which makes them a reasonable place for a fracture. But that doesn’t explain how other fractures would form parallel to it at even spacings of about 22 miles.

Hemingway and his team built on that explanation. Once the first fissure formed, the ice shell would probably have sagged, its weight bending the ice plates parallel to the fissure. The ice shell would crack again where the bending force was strongest — something that’s set by properties of the ice shell, like its rigidity.

When the researchers did the math, they found that the 22-mile spacing between these cracks corresponded to rigidity properties that are pretty reasonable for the moon’s ice shell.

The team also came up with a reason why other icy worlds like Saturn’s moon Titan, as well as Jupiter’s moons Europa, Callisto and Ganymede don’t have similar striped fractures. Once the first fissure forms, the formation of more parallel "tiger stripes" depends on two major factors: the thickness of the ice shell and the gravity on the world. The astronomers say Enceladus just so happens to have the right combination of these to produce its distinctive stripes.