How the First Exoplanets Were Discovered 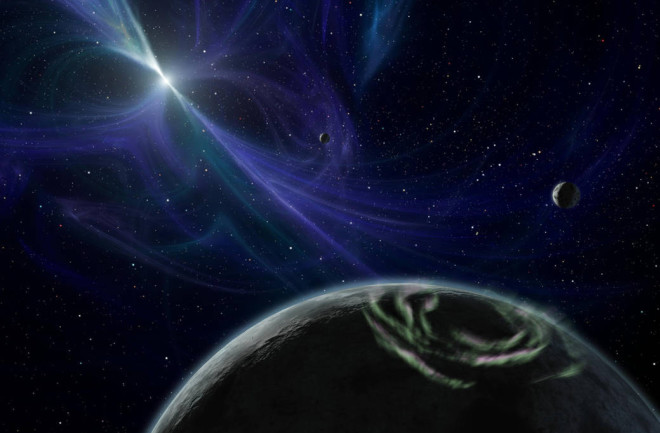 The first exoplanets ever discovered were found orbiting the pulsar PSR B1257+12. It took years for astronomers to find exoplanets around sun-like stars. (Credit:NASA/JPL-Caltech)

In 1992, astronomers discovered the first exoplanet, or planet outside our solar system. But it didn’t come in any form they’d really anticipated.

Neutron stars are the second densest type of object in the universe outside black holes. They form when a giant star dies and explodes outward as a result of the collapse of its core. Put simply, the star becomes too massive to go on and expels all its energy into the surrounding space. The core is a sort of ground zero of this detonation. When that core collapses, depending on the size of the star, it becomes either a neutron star or a black hole.

Some neutron stars are called pulsars, for the regular “pulses” they give off in radio frequencies. Think of many of them like a drummer — fast regular beats. Some pulsars, called millisecond pulsars, “drum” so fast that it would put Napalm Death’s drummer Danny Herrera to shame.

Those pulses are so regular that if they don’t come at the right interval, astronomers know something is off.

A breakthrough in 1992 provided rock-solid evidence of planets. Astronomers Aleksander Wolszczan and Dale Frail tuned into the pulsar PSR B1257+12, 2300 light-years away. It should have pulsed every 0.006219 seconds, but every now and then, its pulses were a little off. Yet those off-beats came at regular intervals as well. After intensive study, Wolszczan and Frail came up with an explanation for why that was: it had two planets around it. One was three and the other four times the mass of Earth, and they rotated around every 67 and 98 days, rounded up.

Pulsar planets are somewhere in between a zombie and a chimera. When a star explodes, usually the planets in that system are destroyed or flung out by a shockwave. But after the violence settles down, the gas and dust can recondense. This, in effect, means that the three planets in B1257 may be made out of parts of the planets that came before them. Given the extreme radiation in these systems, almost no one has ever thought that the B1257 system could host life.

So, while the 1992 discovery was major news, it meant astronomers had the first verified planets around another star, but no proof of planets around a main sequence star like the Sun. That kind of confirmation was still a few years away.

From the 1980s on, many groups had been on the hunt for the first planet around a Sun-like star. Some candidates came and went. Others required dozens or hundreds of observations to officially confirm.

But an observation in January 1995 proved to be the real deal. Didier Queloz, a grad student at the University of Geneva, was working with his advisor, Michel Mayor, on the search for extrasolar planets via radial velocity, in other words, wobbles.

Reportedly, his find was a chance coincidence. Out of a catalog of radial velocity signatures, he chose an F-type star called 51 Pegasi, roughly 50 light-years distant. He was trying to calibrate his planet finding code, opting for the star as one of a few promising candidates. It fell into place that night, a strong signal roughly every four days.

Measurements placed its minimum mass near Jupiter —  meaning the object was without a doubt a planet. While astronomers considered it possible to have such periods, it wasn’t necessarily expected to find one in such a short period. “At this time, I was the only one in the world who knew I had found a planet,” Queloz told the BBC in 2016. “I was really scared, I can tell you.”

There was some reason to be scared: finding a planet was then — and in some ways is still — really hard, and there were plenty of mistakes, ghosts, inexplicable data points, and other hiccups that never seemed to form a planet or a brown dwarf. Yet according to Queloz’s data, the half-Jupiter-mass, quickly moving, ultra-hot planet was there.

Much of the rest of 1995 was spent by Queloz convincing Mayor that he had truly found a signal, not an instrument error or other quirk of observing. Their paper was finally published in October 1995. Astronomer Geoff Marcy (who was later forced out of the University of California, Berkeley, after allegations of sexual harassment) followed up the observations and found that the Geneva team was on to something — he and collaborator Paul Butler were able to find the same signature at an entirely different observatory.

One at a Time vs. All at Once

The early days of exoplanet detections were marked by their focus on star-by-star analyses, almost always through radial velocity, making radial velocity one of the most successful methods for finding exoplanets, discovering 746 worlds as of March 2018. Compare that to 90 found through some form of direct imaging (which is limited to large, hot, and young planets) or 67 through microlensing — chance happenstance when a heavy object passes in front of a background star and acts like a giant magnifying glass. Those are the third and fourth most successful methods for finding exoplanets.

But far and away the most successful approach has been the transit method of finding exoplanets. It’s found 2,789 in all within the same timeframe as the radial velocity headcount. There are 3,705 planets out there, so transiting planets make up 75 percent of all planets discovered. But around 2,648 of those 2,789 planets have been found by one spacecraft: Kepler.

If you take out the worlds discovered by NASA’s Kepler mission, we have only 1,000 planets to work with. That’s because Kepler served as a survey of just one small patch of sky, counting as many planet transits as it could. Previous surveys dealt with a few dozen stars at a time — if that. Kepler, if nothing else, showed that planets weren’t rare at all, and there are millions — or trillions — out there, waiting for our discovery.

For example, in 2016, a group of astronomers working under a thick veil of secrecy announced they had found the closest exoplanet system to Earth orbiting around the star Proxima Centauri. That team — calling itself Pale Red Dot — later rechristened themselves into Red Dots. Their work has added in other nearby systems, like Barnard’s Star, where in November 2018, they found tantalizing evidence of an exoplanet.

In a 2018 conference talk, MIT’s resident exoplanet expert, Sara Seager, mentioned that exoplanet astronomy is, in some ways, taking a turn back toward its beginnings. There will still be some large-scale surveys, but those will be intended to find a handful of candidates for future studies. Other projects like Red Dots will focus on a few stars at a time.

This is partly because, with much of the heavy lifting done on censuses of stars, we are at the edge of being able to know previously unfathomable details about planets — and we may be studying them one by one with giant telescopes and better optic technology.

You can purchase the book online here.