How Science Is Saving van Gogh's Flowers Before They Fade Away

Centuries ago, the discovery of two elements led to new — but unstable — yellow pigments. Today, scientists are deploying particle accelerators to save artwork in these shades. 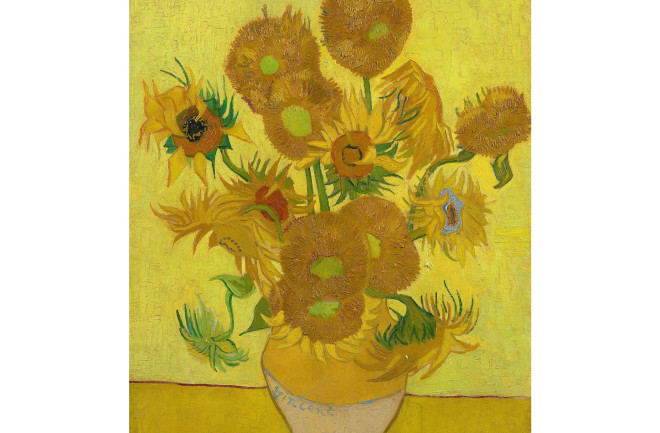 This article appeared in the June 2021 issue of Discover magazine as "Fading Sunflowers and Screams." Subscribe for more stories like these.

If not for some mysterious Siberian lead or a contaminated vial of medicine, Vincent van Gogh’s Sunflowers might not exist, and the figure in Edvard Munch’s The Scream would have looked downright calm.

The discovery of two new elements — chromium and cadmium — at the turn of the 19th century led to a wealth of new yellow pigments. But in their excitement for the fresh, bold shades, painters didn’t realize that the colors might not last.

In recent years, conservation scientists have taken advantage of non-invasive imaging and high-energy X-rays produced by particle accelerators to understand just why these beautiful yellows have morphed into dark browns and sallow whites. Their findings are improving how museums store and display these delicate works of art, preserving the bright yellows of the past before they disappear.

As the 18th century drew to a close, French chemist Louis Nicolas Vauquelin was puzzling over a piece of red lead ore from Siberia. He and his colleagues could not agree on its chemical makeup. Was it a mixture of arsenic and sulfur, or maybe lead, iron and clay? Determined to set the record straight, Vauquelin performed a series of experiments to test how the mysterious substance reacted under different conditions: Acid obtained from the lead was heated in a charcoal oven, boiled in muriatic acid, and even left out in the sun.

After boiling the ore in a solution of potassium carbonate, Vauquelin found that a solid compound formed in a yellow-colored acid. The solid was lead carbonate — confirming that the red lead ore did in fact contain lead. But what about the yellow liquid? In all of his tests, the properties of the ore hadn’t matched any other known element. Thus, Vauquelin reasoned, the yellow solution must contain a brand-new element.

When he mixed the yellow liquid with different elements, it changed into bright colors with each one. So Vauquelin named the new element chromium, based on the Greek word chrōma, meaning “color.” Unsurprisingly, this intensely colored new element led to an explosion of new yellow paints.

“Barium chromate, strontium chromate, zinc potassium chromate, [and] lead chromates of different hues gave you a whole range,” says Francesca Casadio, an associate vice president and the executive director of conservation and science at the Art Institute of Chicago. “It really gave artists all these options.”

To turn these chemical compounds into a usable paint, pigment manufacturers ground them down into microscopic particles, which they then mixed into a binder to make the pigment spreadable; in the 18th and 19th centuries, this was usually an oil like linseed oil. Chrome Yellow, the pigment made from lead chromate, was a particular favorite of the Impressionists and Post-Impressionists like Pierre-Auguste Renoir and Camille Pissarro. Van Gogh, too, bathed the flowers of his Sunflowers series in it.

Meanwhile, in the autumn of 1817, as artists began brushing Chrome Yellow onto their canvases, the apothecaries of Hildesheim were realizing they had a problem. When they tested the purity of their supply of zinc carbonate, instead of forming a white powder as expected, it turned bright yellow.

The local apothecary inspector for the small German town, chemist Friedrich Stromeyer, discovered that the contaminant was not one of the common impurities in zinc ore, but a completely new element — cadmium. Stromeyer remarked on its bright yellow hue and noted that it “promises to be useful in painting.” By the 1840s, Cadmium Yellow, the pigment made of cadmium sulfide, was in artists’ hands.

Even as Cadmium Yellow gained popularity, Chrome Yellow was not living up to artists’ expectations. What began as a vibrant yellow could quickly turn a dark, mottled brown after exposure to light.

Claude Monet noted that the Chrome Yellow pigment on some of his paintings “has greatly faded.” And Renoir complained that he “used to use chrome yellow which is a superb colour, but which apparently plays nasty tricks.”

Cadmium Yellow, it seemed, was the perfect solution to the problem. It was intense, bright, and praised by pigment manufacturers as a color “which may be used with perfect certainty.”

But a few decades after many artists had happily switched to Cadmium Yellow, the English painter William Holman Hunt expressed some doubts: “Cadmium indeed at the best is very capricious,” he wrote in 1906. “Some specimens painted on a trial canvas in 1860, had in 1880 sunk to the colour of dirty beeswax.”

Let There Be Light

To understand how these pigments change, scientists ping them with light. “Thanks to the use of different kinds of light, you can get information of different natures related to the elemental and molecular composition of the pigments,” says Letizia Monico, a heritage scientist at the Italian National Research Council. To identify a yellow brushstroke as Chrome Yellow or Cadmium Yellow, for example, scientists shine high-energy X-rays onto it using a technique called X-ray fluorescence. The X-rays excite the electrons in the elements that make up the pigment, causing them to leap to higher energy levels. Because staying at these levels is unstable, the electrons will fall back down and release energy in the form of light. The light that’s released is specific to each element, so by observing it, scientists can identify whether a cadmium or a chromium element is present.

But just determining if a certain element is there doesn’t tell scientists if the pigment has degraded or not. To do that, scientists use X-rays in a technique called X-ray absorption near-edge structure spectroscopy (or XANES), determining the chemical state of one element at a time.

“Quite often, the elemental composition itself is stable,” says Marine Cotte, a beamline scientist at the European Synchrotron Radiation Facility (ESRF) in Grenoble, France. “However, if you can have information about what is the chemistry of this specific metal, then you can have an idea about the degradation.”

Because degraded pigment is often located in a very small section of a painting, scientists need a narrow beam of X-rays to focus on it. To do this, scientists use X-rays produced by synchrotrons, a type of circular particle accelerator. The two facilities involved in the research, ESRF and the Deutsches Elektronen-Synchrotron in Hamburg, Germany, boast circumferences of 880 and 2,400 feet, respectively; as the electrons zoom around the giant loop at close to the speed of light, they emit X-rays that can be focused into a beam to probe pigment particles at a micrometer or even nanometer scale.

In 2015, using these techniques, Monico, Cotte, and their colleagues uncovered the chemistry behind Chrome Yellow’s color change in Van Gogh’s Sunflowers series: Light was causing the chromium (VI) ions in the lead chromate pigment to reduce to chromium (III) ions, resulting in dark brown compounds where the yellow ones used to be.

The cause of Cadmium Yellow’s fading, however, was not clear. Studies of Henri Matisse’s painting The Joy of Life and Van Gogh’s Flowers in a Blue Vase led scientists to hypothesize that Cadmium Yellow might be degrading into pale-white compounds due mainly to humidity exposure.

In 2020, Monico and her team performed a series of tests on Munch’s The Scream to understand what caused his Cadmium Yellow to fade. They shined different energies of light over the surface of The Scream and pinged a tiny flake of paint from the painting with X-rays from a synchrotron to assess the current degradation state of the Cadmium Yellow pigment. By comparing the current state of The Scream with artificially aged Cadmium Yellow paint exposed to light, high humidity, and high-heat conditions, the team discovered why the brilliant yellow pigment had faded.

“It’s not light,” Monico says, “but humidity, the main factor that could have induced the discoloration and the flecking of the paint in The Scream.”

Under high-humidity conditions, the yellow cadmium sulfide pigment reacts with moisture in the environment to turn into cadmium sulfate, which is white.

“There were some hints that humidity might play a large role, but I don’t think we realized until this current study that it was really the essential agent of degradation,” says Jennifer Mass, president of Scientific Analysis of Fine Art in New York, who was involved in both the earlier Matisse and this Munch study.

The Cadmium Yellow pigments in pieces like The Scream fade in high humidity. (Credit: Liliya Vantsura/Dreamstime)

Preserving Pigments for the Ages

The results of this recent research on Chrome Yellow and Cadmium Yellow degradation are helping museums improve how they store and display priceless works of art.

Van Gogh’s Sunflowers, for example, will no longer leave Amsterdam. Director of the Van Gogh Museum Axel Rüger explained in a press release in January 2019 that the pigments “are stable, but very sensitive to vibrations and changes in humidity and temperature. It is therefore important that the painting is moved about as little as possible, and that it is displayed in a stable climate.”

And when the Munch Museum in Oslo, Norway, moves to its new site across town in the near future, they plan to display The Scream in an enclosed cabinet.

“We have to consider a lower humidity environment to be sure that the [degradation] is controlled and it will not progress over time,” says Irina Sandu, a conservation scientist at the Munch Museum and a co-author of the study analyzing The Scream.

While chromium- and cadmium-based pigments have proven to be unstable, without them we never would have seen the bold work by Van Gogh, Munch, or Matisse, which inspired countless artists after them and will inspire many more in the future. So we can be thankful that Van Gogh took his own prescient advice: “All the colours that Impressionism has made fashionable are unstable, all the more reason boldly to use them too raw, time will only soften them too much.”

Stephanie DeMarco is a science writer based in Los Angeles.