How Researchers Will Carry Out the Search for Extraterrestrial Life 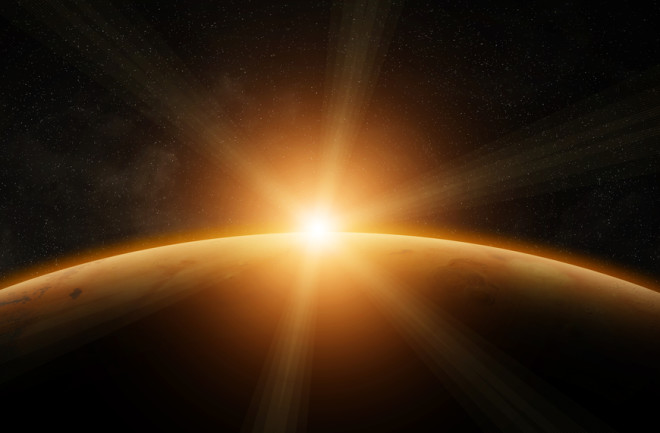 The sun breaks over the surface of another planet in this illustration, potentially revealing the gases that make up its atmosphere. (Credit: sdecoret/Shutterstock) Is there life beyond our planet? Astronomers have asked that question ever since we realized that there actually was something beyond our planet. Given the vastness of the universe, however, we're not likely to journey out and meet it for ourselves anytime soon. Instead, astronomers are searching for a way to bridge the vast distances of interstellar space and search for subtle signs of life on other planets from right here on Earth. SETI has garnered attention for its far-reaching aim: to make contact with intelligent extraterrestrial life. Other experiments, from the Golden Record tucked away in the Voyager missions, to the recently proposed Starshot program, hope that other civilizations will notice our wandering spacecraft. If there is life, it will likely reveal itself through signs much more subtle than, say, a Dyson sphere. Instead, some astronomers are pinning their hopes on "biosignature" gases, molecules in a planet's atmosphere that could only be produced by living organisms and observed from our corner of the universe. The telescopes of the near-future promise to give us the capability to peer into the atmospheres of distant planets and pick out their composition. But if life sends out gaseous greetings, what gases should we be "sniffing" for?

What to Look For

With the possibility of detecting biosignature gases potentially so near at hand, researchers are gearing up to study them. This includes finding which gases would best telegraph the presence of life, as well as eliminating any that could be made through geological processes. "We are not at where we can say that we have a golden standard, but we are at the point where we can say that the best biosignature we have is a combination of oxygen or ozone and methane, or another reducing gas," says Lisa Kaltenegger, an associate professor at Cornell University and director of the Carl Sagan Institute. Oxygen and methane, of course, make up a good portion of our atmosphere, or at least enough to be apparent. This combination is highly prized because oxygen and methane react to form water and carbon dioxide. If these gases exist in appreciable quantities, there must be something generating them, and to our knowledge, only living organisms produce both. "There's no one sign that will tell us that there is life on another planet," says Kaltenegger. "We have other puzzle pieces that we want to put in place with it, like the color of the planet or the age of the planet. All of these will allow us to put the biosgnatures in context." She adds: "You also want to look for water at the same time, because we know that water is the base of life as we know it."

An artist's conception of the James Webb Telescope, which is scheduled to launch in 2018. It will help astronomers study the atmospheres of exoplanets. (Credit: NASA)

It's important to remember that life on another planet, even planets within our solar system, could behave very differently than life on Earth. The molecules we depend on for life could be irrelevant, or even toxic, to extraterrestrial life. "One thing you have to understand is that we don’t know what life is going to make. The best biosignature, ultimately, is one that life makes," says Sara Seager, a professor of Planetary Science and Physics at the Massachusetts Institute of Technology. To find out which molecules extraterrestrial life forms might produce, Seager started with the fundamentals. In a recent paper published in Astrobiology, she and a team of scientists compiled a comprehensive list of all stable molecules with six or fewer hydrogen atoms that could exist in the atmosphere of a planet — some 14,000 molecules in total. The goal was to adopt the broadest conception of a "biosignature gas" in order to account for the inconceivable number of permutations life could take. "We’re not proposing that each of those gases is a feasible gas to look for," says Seager. "But, it’s a starting point to work through some gases initially, others in terms of classes of gases, just ruling them out."

A Daunting Task Ahead

Now that they have the initial list, her team will analyze each of the gases to see what kind of spectra they emit when illuminated by starlight, as well as what kinds of molecules they react with and what the end products are. It's a daunting task, but it's an effort that could yield a comprehensive understanding of all of the gasses that astronomers might detect on another planet, as well the processes that generate them. Only about a quarter of the molecules are produced by life on Earth, and about 2,500 are compounds composed of the six most important elements for life on Earth: carbon, nitrogen, oxygen, phosphorus, sulfur and hydrogen. Carbon bonds easily to most atoms, while nitrogen, oxygen and hydrogen create acid-base effects that lead to organic compounds. Sulfur helps to catalyze reactions, and phosphorus is a vital part of ATP — the energy currency of life. Even here on Earth, there are organisms that swap out some of these elements for others, especially in the case of extremophile microbes that live in places where some of the elements may not exist. It's not necessarily a huge leap of the imagination to visualize life forms using different combinations of the 118 known elements to survive. Even with a complete understanding of the chemistry behind every molecule we could find in an exoplanet's atmosphere, the best we can do is come up with an educated guess that life may be present. "At the end of the day, we’re unlikely to be able to say that we’ve definitely found life [and] we’re sure of it," says Seager. "We’re more likely to say that we see this gas, it’s so unusual and there’s so much of it; we don't know how that gas got there so it might be produced by life."

The recent discovery of three exoplanets orbiting a very cool star gave researchers a prime target for scouring exoplanet atmospheres. Currently, astronomers spot exoplanets by observing them as they pass directly between their star and Earth, causing a star's brightness to dim in a nearly imperceptible, yet rhythmic way. By analyzing the spectra of the light that passes through the thin shell of these planet's atmosphere on its way to us, astronomers can tell what kind of gases are present. We can't really conduct such experiments yet, because current Earth- and space-based telescopes aren't powerful enough to capture light that has filtered through less than 60 miles of a planet's atmosphere from a distance of dozens to hundreds of light-years away. The ability to do so lies on the horizon. The James Webb Space Telescope, set to launch in 2018, will capture enough light to conduct analyses of gases on distant planets, hopefully allowing astronomers to see what elements and molecules their atmospheres are composed of.