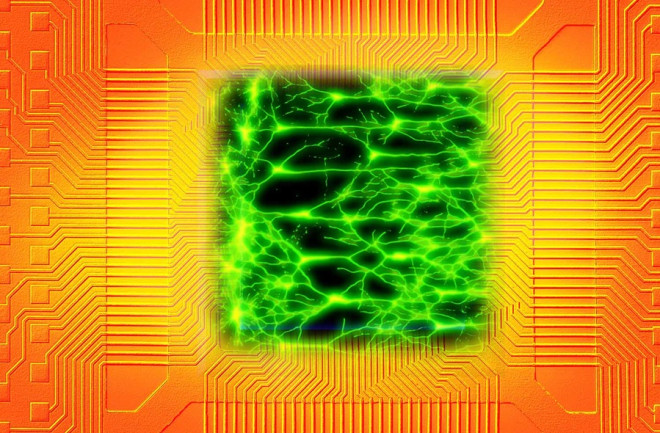 Cellular cyborgs could one day step in when your body falls short in its attempts to hunt cancer cells, tamp down overactive immune responses or adjust the gut microbiome. Alfred Pasieka/Science Source

Alec Nielsen typed a few lines of code on his laptop, and a circuit schematic appeared in another window. Unlike most people who design circuits, however, he wasn’t making a computer chip. He was designing strands of DNA.

Nielsen and a growing number of researchers want to hijack the biochemical processes of living cells to turn them into microscopic cyborgs — part living things, part programmable machines. These cellular cyborgs could one day step in when your body falls short in its attempts to hunt cancer cells, tamp down overactive immune responses or adjust the gut microbiome.

Key to this vision is controlling how cells sense and respond to their environments, says Christopher Voigt, a bioengineer at MIT and co-founder of Asimov, a biotech startup that Nielsen leads. In nature, cells do this by turning on different genes at different times under different conditions. All this activity is controlled by the complex interactions of DNA, RNA (the molecules that carry out DNA’s instructions) and protein molecules, says Voigt.

Researchers are gaining control of cellular behavior by making simplified, synthetic versions of those gene interactions, or genetic circuits — and increasingly they’re making circuits that work on computer logic. Computer chips are made up of billions of transistors that switch the flow of electricity on and off in microscopic wires. The transistors are connected to form logic gates, whose outputs are determined by the types of inputs they receive. For example, an AND gate lets current flow out only if current is flowing in from all the inputs, while an OR gate requires only one input. Combinations of different logic gates give smartphones, computers and the internet the ability to run programs, crunch data and send and receive information.

Instead of transistors, these synthetic biological logic circuits use specially designed strands of either DNA or RNA. This biological logic operates separately from normal cell functions in cellular cyborgs. The logic determines when conditions are right to activate cyborg genes, which can do all manner of helpful things like producing cancer-killing proteins, transforming stem cells into specific cell types or adjusting the immune system.

“You can imagine designing whole organisms to do things that they can’t normally do,” says Voigt.

It’s still early, but in the last few years researchers have routinely endowed cells with rudimentary computing capabilities, says James Collins, another MIT bioengineer and one of the pioneers of synthetic biology. Many researchers have developed cells with a simple form of logic: switches based on AND and OR gates. Synlogic, a biotech firm Collins co-founded and advises, is developing several therapies that use this type of logic switch in bacteria. For example, such engineered probiotics aim to treat rare genetic metabolic disorders by removing ammonia after detecting high levels of it in the blood.

Synlogic is also developing more complicated switches with multiple inputs and outputs to use in therapies for inflammatory bowel disease, says Collins. These switches would flip only when the cell detects all biomarkers for inflammation — a multiple-input AND gate, in logic terms. When a switch flips, the bacterial cyborg would then secrete antioxidants and molecules that dial down the immune system’s inflammatory response.

Martin Fussenegger, a bioengineer at ETH Zurich in Basel, Switzerland, has conducted several proof-of-concept studies in mouse models that show the potential of mammalian cellular cyborgs. In a study of a psoriasis treatment, engineered cells produced anti-inflammatory proteins when they sensed elevated levels of two specific proteins. “So if a designer cell needs to respond to psoriasis, it needs to implement AND gate logic,” he says.

Switches like these are the beginning of what’s possible in adding computing capabilities to living cells. Thanks to genetic NOR gates, which turn off if any of two or more inputs is on, cells can block the expression of a gene if certain biomolecules are present. In a 2017 paper, one team of researchers showed they could string together five NOR gates in a yeast cell. Another team built a three-input, two-output full adder (a circuit that literally adds up numbers), which combines different types of logic gates, in human embryonic cells. These advances mean that cellular cyborgs with more advanced computing capabilities than simple switches aren’t far behind.

Researchers have been dreaming up all manner of cellular cyborgs, and with tools like Cello, the software that Asimov uses, designing the necessary genetic circuits is relatively straightforward. The challenge is creating components of logic circuits that work reliably without interference from the natural activity in cells, and that don’t rob cells of too much energy or too many resources.

Another approach to building cellular cyborgs is using cells that are pretty smart to begin with. Wilson Wong, a bioengineer at Boston University, is turning human T cells — the building blocks of the immune system — into cellular cyborgs. His lab is developing a cyborg based on a T cell that is naturally adept at killing cancer cells. “We just ask it to be a little bit smarter and make decisions the way we want it to,” he says.

The field of cancer immunotherapy, in which immune cells are engineered to target cancer, has heated up recently with the development of what’s called CAR-T. In CAR-T therapy — which received FDA approval in August 2017 — a patient’s T cells are removed, modified to sense a specific type of cancer cell, then injected back into the patient. But today’s CAR-T therapies are static and relatively simple. They can also trigger potentially deadly overreactions from the patient’s immune system.

Wong’s lab has developed a smart CAR-T called the Split Universal and Programmable (SUPRA) CAR system, which homes in on multiple cancer biomarkers and adjusts the strength of the immune response to the patient’s degree of cancer. If the cancer cells evolve the ability to hide from the T cell cyborgs, it also allows physicians to retarget the smart cells after they’re in the patient’s body.

Wong aims to take this CAR-T concept beyond cancer treatments. By engineering regulatory T cells, which suppress the body’s immune response, researchers could develop treatments for autoimmune diseases such as rheumatoid arthritis, Type 1 diabetes and multiple sclerosis, he says. Wong’s goal is to program different types of T cells and control them individually, a concept he’s dubbed the prosthetic immune system. Physicians could use it to regulate a patient’s immune response, he says. “If you can do that, you can treat a huge number of diseases.”

Though human cyborgs are likely to remain science fiction for many years to come, it might not be long before people routinely have cellular cyborgs swimming through their veins.