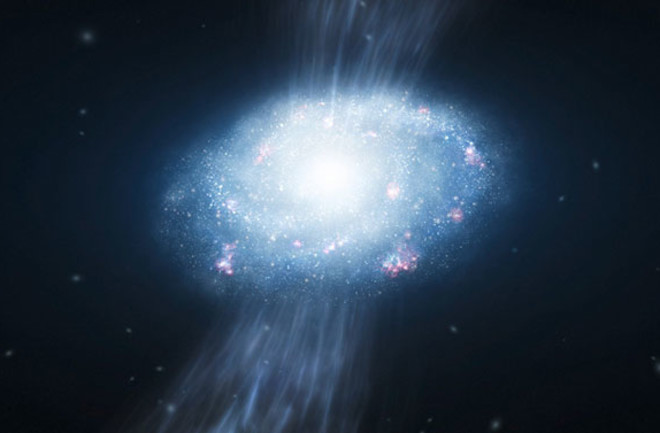 When the universe was young, massive galaxies formed quickly but surprisingly peacefully. Researchers say they've found evidence that these galaxies didn't grow by sucking up the remnant materials from supernovae or by violent collisions with other galaxies--instead they were fed by streams of cold gas that were funneled into their central star-forming region.

Astronomers using the European Southern Observatory's Very Large Telescope in Chile have observed three primeval galaxies with patches of star formation near their centers, away from the heavy elements that signal the remains of previous stars. The team found that these galaxies were sucking in cool hydrogen and helium from the space between galaxies as fuel. "It solves the problem of providing to the galaxies fuel to form their stars in a continuous way, without having to invoke violent mergers and galaxy interactions," said study researcher Giovanni Cresci. [SPACE.com]

DISCOVER: Scientists Are Ready to Build Some Galaxies

DISCOVER: Are Black Holes the Architects of the Universe?