How Pluto Formed Its Mysterious Dunes 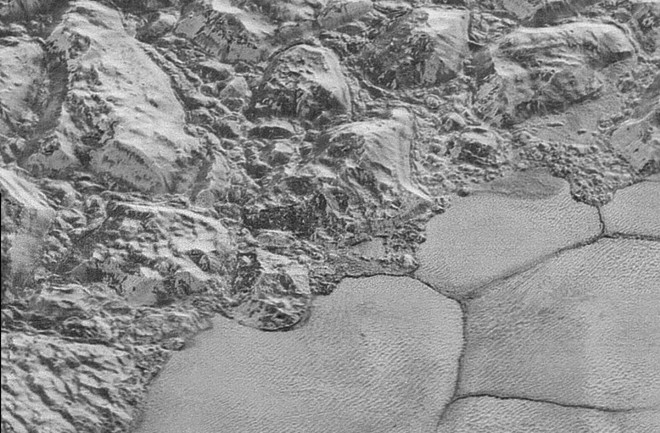 When NASA’s New Horizons spacecraft zipped by Pluto at 31,000 mph in July 2015, it captured a plethora of breathtaking photos of the distant dwarf planet’s surface. Within these highly detailed images, researchers noticed what looked to be an extensive system of strange dunes stretching 75 miles along the boundary of Pluto’s massive Al-Idrisi Montes mountain range and Sputnik Planitia — a nitrogen-ice plain that forms the left lobe of the planet’s famous “heart.” “We knew that every solar system body with an atmosphere and a solid rocky surface has dunes on it, but we didn’t know what we’d find on Pluto,” said Matt Telfer, lead author of a new study that reveals the origins of Pluto’s mysterious dunes, in a press release. “It turns out that even though there is so little atmosphere, and the surface temperature is around –230 degrees Celsius [–382 degrees Fahrenheit], we still get dunes forming.” According to the study, published in May in the journal Science, despite the vast differences between Pluto and Earth, the two worlds apparently form dunes in a very similar way. Specifically, Pluto’s atmosphere captures small particles of methane (instead of sand) from the base of a nearby mountain range before relatively strong winds carry the particles away. These particles eventually settle with a little help from gravity, ultimately forming wind-swept dunes comparable to those found on Earth. “When we first saw the New Horizons images, we thought instantly that these were dunes, but it was really surprising because we know there is not much of an atmosphere,” said co-author Jani Radebaugh. “However, despite being 30 times farther away from the Sun as the Earth, it turns out Pluto still has Earth-like characteristics.” https://www.youtube.com/watch?v=3rOz4u0cudo To determine exactly how a frozen planet with an atmosphere just 1/1,000th as thick as Earth’s (and with 1/100,000th the pressure) could form wind-swept dunes, Telfer and his team carried out a detailed spatial analysis of the dunes, finding orthogonal wind streaks similar to those found seen in sand dunes on Earth. Furthermore, spectral and numerical models showed that Pluto’s dunes may form from a thin layer of methane that gets released into the air due to nitrogen ice below it sublimating — or turning directly from a solid to a gas. Alternatively, the methane may come directly from the bottom of the nearby mountain range, getting swept up in the winds that flow down the mountainous slopes at roughly 22 mph. “On Earth, you need a certain strength of wind to maintain transport,” said co-author Eric Parteli. “The considerably lower gravity of Pluto, and the extremely low atmospheric pressure, means the winds needed to maintain sediment transport can be a hundred times lower.” In other words, Pluto’s winds are more than strong enough to carry tiny particles through a thin atmosphere on a world where gravity is 12 times weaker than it is on Earth. Though New Horizons is now too far from Pluto to gather any more useful information about the dwarf planet, its mission is still far from complete. In just six short months, on New Year’s Day 2019, New Horizons will fly past the tiny trans-Neptunian object 2014 MU69, located about a billion miles beyond Pluto. This will make 2014 MU69 the most distant object in the solar system ever visited by a spacecraft. “We have been focusing on what’s close to us,” said Radebaugh, “but there’s a wealth of information in the distant reaches of the solar system too.”