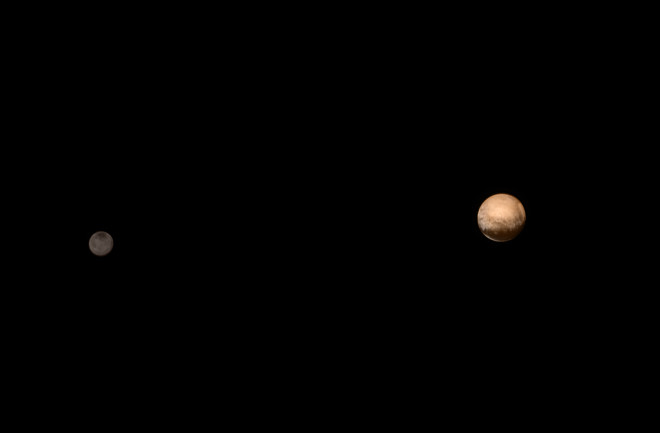 Pluto and Charon seen by New Horizons from 3.7 million miles. This spectacular view, and the mission that made it possible, nearly didn't happen--not once, but over and over. (Credit: NASA/JHU-APL/SWRI) In space exploration, there are a million ways that things can go wrong and just one way that they can go right. When the New Horizons probe skims less than 8,000 miles past the surface of Pluto on July 14, it will happen only because a large team of scientists, engineers, and mission planners managed to eliminate all the wrong and navigate their way to the right, a process that has taken more than 40 years to fully unfold. The engineers have become so good at fixing problems that most of the time the public has no idea what they are up against—until something goes wrong, as happened to New Horizons last weekend, when a software glitch caused the probe to shut down into "safe" mode. For a moment, this was a news story. Then, once again, the engineers stepped up and solved the problem (caused by an obscure timing flaw in a command sequence sent to the probe in preparation for flyby). Within three days, all was back to normal. As New Horizons principal investigator Alan Stern says, "In terms of science, it won’t change an A-plus even into an A.” But software problems are hardly the only glitches that nearly derailed the mission to Pluto. Politics and personalities can go wrong, too, and they frequently did. The beginnings of the tale go all the way back to the 1970s, to a shadowy time known as the Nixon Administration. At the time, space scientists realized that a rare configuration of the outer planets would make it possible to efficiently send a spacecraft on a grand tour of the outer solar system, using the gravity of each giant planet to boost it on to the next. Such an alignment happens just once every 176 years. NASA planners came up with a concept called--naturally--the Grand Tour. It would have sent 4 spacecraft to the outer solar system, with one of them destined for Pluto. By early 1972, though, NASA's political fortunes were sinking fast. Nixon had cancelled Apollo 18 and 19. Public and Congressional support for space exploration was plummeting; the country was in recession and mired in Viet Nam. A $1 billion-plus fleet of space probes (and remember, this was in 1972 dollars) was just not going to happen. NASA reconfigured the cancelled Grand Tour into the cheaper, two-probe Voyager project and sacrificed Pluto in the process. After that came a long, heartbreaking series of attempts to create a new Pluto mission from scratch. Alan Stern was a prime mover behind those efforts, going all the way back to 1990. (Jason Davis at the Planetary Society provides a great summary of the proposals, or if you want all the gory details take a look at Michael Neufeld's more academic account.) The missions had such hopeful names: Pluto 350, Pluto Fast Flyby, Pluto Express. Finally, Stern came up with the winning concept, New Horizons. His final proposal was due one week after 9/11, while the offices of the Johns Hopkins University Applied Physics Lab (which operates the mission) were still shut. Stern completed the proposal and NASA approved it.

Heart-shaped region on Pluto (created, perhaps, by a coating of nitrogen frost) evokes the love now being lavished on New Horizons. But the mission was not always so favored. (Credit: NASA/JHU-APL/SWRI) The following year, the new NASA administrator tried to kill New Horizons in favor of a high-tech fission-powered mission. He failed, and New Horizons survived. One benefit of its long, difficult competition is that Stern and the mission engineers came up with a relatively inexpensive, flyweight spacecraft. New Horizons weighs about half as much as Voyager 1, and in real dollars costs roughly one-third as much. Placing a lightweight probe atop a large Atlas V rocket yielded the fastest object ever launched when New Horizons took off in 2006 (though New Horizons has decelerated en route, allowing Voyager 1 to regain the speed record). In that context, it would have been even more tragic to have New Horizons felled by a simple software error. But it would also have been extremely unlikely. The New Horizons team is fully prepared for glitches, to put it mildly. Lest you think these troubles are specific to Pluto, allow me to draw your attention to a couple other recent case studies. There is the Dawn spacecraft currently orbiting dwarf planet Ceres. It uses an innovative ion engine, which both reduced costs and increased the flexibility of the probe, allowing it to visit and orbit two different objects--the first time a spacecraft has done that. The downside is that the engine needs to keep firing for a long period of time. When a cosmic ray struck Dawn last autumn, the spacecraft had to reboot. By the time it was back on line, the original trajectory was lost, and mission planners had to design a new trajectory to Ceres. On June 30, just four days before the New Horizons software anomaly, a software error caused Dawn to shut down again, keeping it parked in its current orbit around Ceres longer than intended. The engineers are staying there for now until they are 100% sure they understand the nature of the problem and how to prevent a recurrence. We'll have to wait just a little longer to figure out those bizarre white spots.

Dawn's planned (red) and actual (green) paths to Ceres. The change of course was forced by a single errant cosmic ray hitting the probe's electronics. (Credit: NASA/JPL) And then there is the Rosetta spacecraft and Philae lander on Comet Churyumov-Gerasimenko--the one most people just call "Comet 67P" or "Rosetta's comet." Like New Horizons, Rosetta and Philae are survivors of previous cancelled missions, cost cuts, and changed plans. Long ago, the plan was to pair the comet probe with the Cassini spacecraft now orbiting Saturn as part of a joint US-European venture called CRAF/Cassini. Things didn't quite work out that way. Philae's landing on the comet didn't work out as planned, either, of course. The harpoons and ice screws that were supposed to hold the probe in place did not work correctly. The lander bounced to an unplanned and unsafe location. It ran through its baseline science mission, drained down its batteries, and fell silent. And then it came back to life, as many had hoped but few had expected, when the comet's path around the sun exposed the little lander to more sunshine. As of today, Philae is again talking with Rosetta, potentially plotting a return to scientific exploration. Rosetta scientists are thrilled, because now they may be able to get data from the comet's surface while it is much closer to the sun than originally planned. In some ways, therefore, the lander's hibernation is a bonus, says Philippe Goudon, Philae project manager at CNES. When Rosetta got the first signals from Philae that the lander was awake, the engineers immediately began plotting a new set of explorations. They were ready, as always, to recover from all the things that had gone wrong and turn the situation into another one thing gone right. Follow me on Twitter: @coreyspowell