How Hydra Regrow Their Heads

The genes involved in hydra regeneration and development could offer clues about immortality. 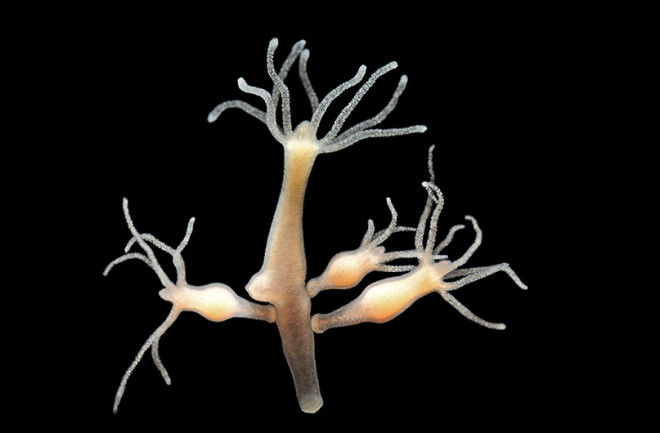 (Inside Science) — For decades, hydra -- tiny aquatic animals that look like floating tubes with arms -- have been synonymous with the quest for longevity. Now, a new paper maps the ways hydra can regenerate their heads by changing how their genes are regulated.

Many animals can grow back parts of their bodies (for example, infant humans can regrow fingertips, and lizards and salamanders can regrow limbs). But for hydra, which are relatives of jellyfish and sea anemones, an entirely new body can reform from small fragments of tissue. And the animals seem to be able to do it again and again, without aging. On average, they replace all their cells every 20 days. One 2014 paper estimated that under controlled laboratory conditions, 5% of hydra would still be alive after 1,400 years.

Hydra heads aren’t true heads with brains -- instead, they are clusters of 50 to 300 cells near the creature’s mouth that organize development. The normal process by which a new head grows and splits off into a new animal is called budding. But if a hydra loses its head, a new organizer can appear and coax a new head to form. And sometimes, the lost head can regrow on the animal’s lower body.

In the new paper, published yesterday in the journal Genome Biology and Evolution, Macias-Muñoz and her colleagues identified 298 genes that were expressed differently during budding and regeneration, indicating that the two processes were regulated differently.

"If you're making a new finger you would expect it to be done in the same way, even if it's during regeneration. But actually, it turns out it's done differently -- different genes are turned on, and at different times," said Macias-Muñoz. "But somehow it still ends up with the same result."

Researchers have long wondered to what extent regeneration and development are different, said Mansi Srivastava, a biologist at Harvard University who was not involved in the new paper. This work could start to explain what processes are specific to regeneration. "It gives us a really sort of broad view into how the RNA and the genome are changing, and it gives us raw material to get more specific answers," said Srivastava.

The next step, said Macias-Muñoz, is to validate the genetic findings by turning off some of the genes to test whether regeneration continues. The researchers can also test whether ramping up gene activity causes multiple hydra heads to appear.

Since hydra are thought of as immortal -- able to regenerate their whole bodies again and again -- this research can contribute to a deeper understanding of how the whole regenerative system operates, said Macias-Muñoz. “It can tell us about how cells communicate with each other to keep the animal shaped the way it is."