Lightning is well-documented in both theology and history, leaving humans in awe of its strike. 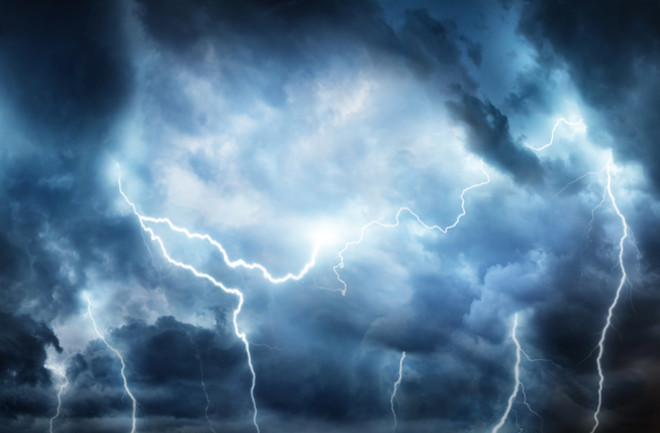 Imbalances between storm clouds and the ground, or within the clouds themselves, causes lightning, an electrical discharge. There are many types of lighting: ball and bead, forked and sheet, superbolts and rocket lightning, crown flashes and anvil crawlers, staccato lightning, ribbon lightning and others.

The wonder of lightning has captivated and intrigued humans throughout history, often sparking theological and mythological interpretations. These interpretations occurred long before science could answer some of the questions that kept humans in awe. Most might have wondered, if a God didn’t produce thunderstorms, then what did?

In Awe of Lightning

In Judaism, it’s customary to recite the blessing, “Who makes the work of creation,” upon seeing a lightning strike. In the Christian Bible, the book of Revelation refers to lightning as the final judgment.

And in Islam, the Quran states, “Do you not see that Allah drives clouds? Then He brings them together; then He makes them into a mass, and you see the rain emerge from within it. And He sends down from the sky, mountains [of clouds] within which is hail, and He strikes with it who He wills and averts it from who He wills. The flash of its lightning almost takes away the eyesight.”

We even see lightning throughout mythology. Lei Gong, the god of thunder in Chinese folklore, would punish earthly mortals guilty of crimes when he was angry. He carried a drum and mallet to produce thunder and he would wield a chisel to punish evildoers. His wife, Dianmu, was the goddess of lightning, who used mirrors to shine light upon the Earth.

Another figure, Ukko, drove a chariot across the sky. It caused thunder. And the Finnish God possessed a hammer. When he used it, lightning would strike.

The Science Behind the Strike

Scientists eventually did learn that mythic birds or mighty hammers didn’t cause lightning. During a storm, colliding particles of liquid – rain, ice or snow – inside storm clouds increase the imbalance between storm clouds and the ground, and often negatively charge the lower reaches of those clouds. Objects on the ground, including trees, church steeples or the Earth itself, become positively charged. To rectify the imbalance, nature passes a current, or lightning, between the two charges.

Like any tall building, those church steeples are prone to lightning strikes. In Medieval Europe, many churches that were on hills above small towns would burn to the ground when lightning struck. Towns would suffer the loss. Even today, the Basilica of Saint-Denis, near Paris, looks incomplete with its single asymmetrical tower. In 1837, a lightning fire damaged it and they had to demolish one tower.

Others thought the pealing bells would somehow change the air’s flow, breaking the lightning’s path toward the church tower. Both theories proved wrong, and fatal. In France, between 1753 and 1786, lightning strikes killed 103 bell ringers during thunderstorms. In many instances, they were holding onto wet ropes, clanging the bells.

At that time, the science of lightning was in its infancy and slow going. In the era of Sir Isaac Newton, during the late 1600s and early 1700s, the science of electricity amounted to the observation of static charge. It was simply “electric magic.”

In 1743, Scottish lecturer Archibald Spencer did a presentation in Boston on this electric magic. It caught the interest of a youth who was in attendance: Benjamin Franklin.

And it was Benjamin Franklin — with his kite and key experiments from 1752 to 1753 — that concluded lightning was electricity. He soon invented the lightning rod, which surely saved the lives of many bell ringers.

Regardless of these electrical charges in clouds or the work of Gods, the power of thunderstorms will always dazzle humans.