How Google Earth Has Revolutionized Archaeology

Thanks to Google Earth and other open-access imagery, amateur archaeologists are making spectacular finds — but what are we losing? 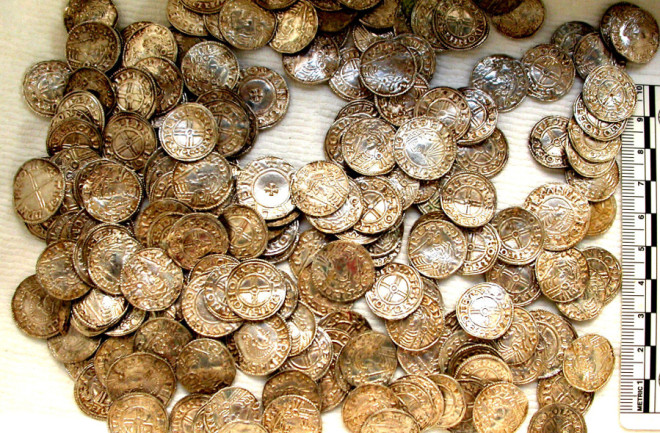 One of the largest Saxon coin hoards ever discovered was found in December 2014 by amateur archaeologists scouring a field in the English countryside using metal detectors. Portable Antiquities Scheme

On a wintry December day, in a farmer’s barn tucked into the English countryside, Peter Welch was setting out snacks for fellow metal-detector enthusiasts when one of them came in and said, “You’d better have a look at this.”

Welch tramped up a hill to where half a dozen people gathered around a freshly dug hole. In the cold ground was a handful of 11th-century coins, the first of more than 5,000 that would be found at the site as the excavation progressed. The discovery — one of the largest hoards of Saxon coins ever found in the United Kingdom — could be valued at more than $1.5 million.

For Welch, founder and owner of the Weekend Wanderers Detecting Club, the sheer thrill of the find was the proverbial pot of gold at the end of a rainbow called Google Earth.

The descendant of a CIA-funded project, Google Earth has become arguably the most popular — and ubiquitous — open-access satellite-imagery program in the world. Since its public launch in June 2005, Google Earth — with its virtual globe and street view capabilities — has found its way into driving directions, real estate presentations, study plans, online games such as GeoGuessr and flight simulators.

“It’s invaluable. I can’t imagine anyone not using it,” says Welch.

Welch became interested in the general area where the hoard was discovered, in Buckinghamshire, northwest of London, after finding a reference to a nearby estate in the famous 11th-century land survey known as the Domesday Book. Welch then used the famous 21st-century satellite imagery of Google Earth to hunt for specific spots that might be worth exploring.

“On Google Earth, you can see ridge and furrow quite clearly,” says Welch, referring to a medieval method of plowing that leaves behind a distinct land pattern even after centuries. “But it was a strange shape in the hedge line, a piece of woodland, that made me ask, ‘Why is that there?’ ”

Before the days of the backhoe, if farmers hit a piece of masonry, buried boulder or another obstacle while plowing, it was easier for them simply to plant trees — a cue to avoid the spot — rather than dig up the object or keep snagging their plows, Welch explains. That’s why a Google Earth image showing trees in fields that have been farmed for centuries draws the eye of enthusiasts like Welch, who makes his living identifying potential sites and organizing paid events to explore them further, at ground level.

Welch’s enterprise has found numerous artifacts over the years, from Roman villas to Bronze Age beads. He obtains permission from landowners beforehand — Welch says he’s found most landowners are curious about their properties’ past but lack the time or manpower to explore often huge tracts of land. Outside of pheasant and partridge season, when they can make money by allowing hunting parties on their property, most of the landowners are happy to have Welch’s group do the dirty work, literally, even though the landowners themselves will get little more than bragging rights over any treasures found.

Welch works with a liaison from the local county archaeologist’s office to ensure any finds are properly documented and analyzed. For example, the Saxon coin hoard is now at the British Museum.

“I’m not a treasure hunter,” Welch says. He notes that he and Weekend Wanderers have been involved in — and compliant with — the U.K’s Portable Antiquities Scheme from its start in the late ’90s. The program connects enthusiasts with professionals to encourage protection of sites as well as artifacts. In the Google Earth era, it’s needed more than ever.

Eye in the Sky

Working archaeologists agree with Welch that Google Earth and similar open-access apps such as Flash Earth have changed how enthusiasts find sites. But the high-resolution imagery is not a revolution for the professionals; it’s just the latest iteration of a tool that was around decades before the first satellite launched into orbit.

“Aerial photography, interpretation and mapping made the 20th century’s greatest contribution to British archaeology,” notes Ben Robinson, English Heritage’s principal adviser for heritage at risk in the East Midlands region and host of the BBC show The Flying Archaeologist.

Aerial photography was equally important on this side of the Atlantic, says Francis McManamon, professor and executive director of the Center for Digital Antiquity at Arizona State University. Consider northeastern Louisiana’s Poverty Point, for example, a mound complex that was a thriving city more than three millennia ago. Named a UNESCO World Heritage Site in 2014, Poverty Point was first surveyed by archaeologists in 1913.

“There’s a big mound in the middle that’s in the shape of a bird,” says McManamon. People knew the mound was there but had no idea of its shape until 1938, when the Army Corps of Engineers flew over and photographed it. Even then, the files languished until 1952 before someone analyzed them.

Even though satellite imagery produces higher resolution, it has the same limitation as its predecessor. “Satellite imagery is still a photo. You’ll only see what the eye can detect,” says McManamon.

Professional archaeologists will still consult satellite imagery, especially for logistical planning of a field site. But when prospecting for new finds, they’re more likely to use tools such as hyperspectral imagery, which can find electromagnetic fingerprints of objects and land features invisible to the naked eye, or light detection and ranging (LIDAR) technology, which maps subtle surface variations with extreme accuracy.

That means Google Earth and similar sites are used mostly by non-professionals. When asked if he looks askance at these amateur archaeologists, McManamon doesn’t mince words.

“Askance is a generous term. Horrified is more to the point,” he says.

In some fields other than archaeology, McManamon explains, amateur discoveries can be a boon to researchers short on time and funding for fieldwork. “With meteorites, the meteorite is the object,” McManamon says. “Archaeology isn’t like that. Most archaeological data is contextual. It’s important to know what was found next to what, in which layer [of soil]. It’s what happens at a site afterthe discovery of an artifact that’s crucial.”

English Heritage’s Robinson agrees, noting context can be lost due to ignorance of, or indifference to, proper excavation methods. “Sadly, there is a persistent menace from those who deliberately set out to loot protected archaeological sites, or who couldn’t care less about wrecking them,” he says.

Although professional archaeologists lament the carelessness — and cluelessness — of many amateurs, they admit that Google Earth has boosted interest in their work. As more would-be Indiana Joneses take to the field with their smartphones and metal detectors, professionals are amping up public outreach programs to promote responsible exploration.

The U.S. doesn’t have an online hub quite as comprehensive as the U.K.’s Portable Antiquities Scheme, but there are programs throughout the country, usually at the state level, that can help enthusiasts understand local and federal laws regarding trespassing and site protection — and what to do if a chance shadow you spot on Google Earth leads to an actual find.

“Take a photo, get precise GPS coordinates, but then take that information to the state archaeologist’s office,” advises McManamon. “You can still have the excitement of exploration and discovery, of getting out there, but ensure what you find gets properly preserved and interpreted.”

McManamon and colleagues are also expanding the Digital Archaeological Record (tDAR), an online archive geared toward researchers but open to everyone.

“We get a lot of non-professionals using it, which we’re thrilled about. I think access to archaeological records makes people better informed and, ultimately, better stewards of these sites, which are precious and non-renewable resources,” says McManamon.

“Just don’t pick anything up,” he adds with a chuckle.

While armchair archaeologists rely increasingly on digital technology — be it Google Earth or other data sets — it’s likely that a very human element will remain a key part of the discovery process.

Says Weekend Wanderer Welch: “For me, the biggest thrill is finding something with a tangible link to a person’s life, like a lead seal matrix that’s not worth much but might have his name and even his profession on it. To hold something that no one else has held since that person, to have that link to the past, makes it all worth it.”

[This article originally appeared in print as "Playing the Field."]

Google Earth is not the only online destination for those who want the thrill of discovery without the dust and cramped tents of an actual field dig. Open-access satellite imagery sites and databases make it easy for enthusiasts to poke around archives and squint at shadows in the landscape.

Britain From Above: Registered users can help identify and classify more than 96,000 aerial images of England and Wales from the first half of the 20th century in this ongoing crowdsourced project. ➔ britainfromabove.org.uk

The Digital Archaeological Record: Geared for researchers but accessible to the public, the online archive holds thousands of documents and other files on sites around the world. ➔ tdar.org

Flash Earth: Zoom in on a spot and toggle between eight different image and mapping options from NASA, ArcGIS and other imagery collection sites. ➔ flashearth.com

GeoGuessr: By mixing Google Earth with road trip snapshots, the Swedish team behind this viral sensation have created a number of free and addictive games testing your knowledge of geography, topography and language — including one on famous places. ➔ geoguessr.com

Portable Antiquities Scheme: Covering much of England and Wales, this database of discoveries from the government project promotes responsible amateur archaeology. ➔ finds.org.uk