How GMOs Will Let Astronauts Live on Mars 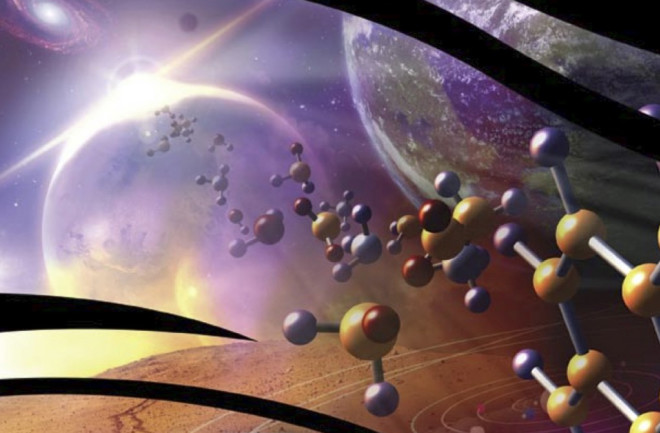 (Credit: NASA) Don’t panic, future astronauts, but GMOs will probably accompany you on your adventures to deep space. Scientists hope to genetically engineer organisms to survive off-Earth and to do some of the dirty work on spaceships and other planets. The field of study is called “space synthetic biology.” And this new frontier in genetic research could be key to opening up the final frontier.

Synthetic biology refers, generally speaking, to the work of giving some organism altered or even novel characteristics by changing its genes. Space synthetic biologists genetically alter organisms to make them more space-worthy — resistant to radiation or heat, for instance — and to make them useful to space missions — like turning Martian dirt into concrete. It sounds “out-there,” but microbes already make our planet habitable and pleasant. “We’re breathing oxygen that was biologically produced,” says Lynn Rothschild, the head of the synthetic biology program at NASA’s Ames Research Center. “I’m wearing cotton that was biologically produced.” We’re not going to take sheep on space missions, she clarifies, but we could take the capabilities of oxygen- and cotton-making plants and put them into the DNA of more portable life, like yeast. “Start looking at biology as technology,” she says, a “genetic hardware story” that could infuse all aspects of space missions.

A petri dish with specimens lit by LED lights at an Ames Research Center laboratory. (Credit: NASA) Rothschild advises the Stanford-Brown team in the International Genetically Engineered Machine competition, where her groups have, among other things, made wires using DNA as a template; created a biodegradable drone; and taken genes from extreme bacteria and inserted them into E. coli to create hybrid organisms that resist extreme pH, temperature, and dryness. They called it the Hell Cell. Such bio-based technology, according to a November report from a team led by Amor Menezes California Institute for Quantitative Biosciences in Berkeley, requires 26-85 percent less mass than “abiotic” (non-living) systems. For instance, a spaceship could carry a habitat to Mars, like the Apollo missions did to the moon, but no one wants to live in a tin can, and also that tin can is heavy. “Think in analogy with early long-term travel on Earth,” says Rothschild, like pilgrims to North America. “They didn’t bring houses. They learned to live off the land.”

Future astronauts will have to live off of inhospitable land and also spaceships, which have no land. Menezes’s report sets forth a plan for those astronauts, suggesting directions the research could go. The microbes we use for terrestrial composting and waste treatment, for instance, produce nitrous oxide, which is spaceship go-juice. We could genetically engineer those microbes to do their duties in space, with different oxygen requirements and faster reaction capabilities but the same basic chemistry. Just by pooping and making trash, then, astronauts could create the raw material for fuel. Once those refuse-creating colonists arrive on Mars, they could use carried-on microbes to mine the materials for building their new homes. Microbes that make acid could dissolve the Martian rock that surrounds metals, leaving just “the resource.” Or we could engineer microbes to dissolve the resource itself, so that it flows out and can then be reconstituted into a colonial outpost. Construction companies on Mars could take the “regolith,” or surface material, and bind it together using natural glue, like mussel foot protein (engineered for optimal performance on Mars). Scientists could also make microbes that chew on the regolith and spit out calcium or iron to make “biocement.” Leftovers! Poop processing, manufacturing, and construction all leave behind useful byproducts, like methane, which could help keep the colony’s lights on. The outpost, while electrified, wouldn’t have many frills. But scientists do have to ensure astronauts’ basics: air, water, and food, indefinitely.

The six major challenges for space synthetic biology. (Credit: Hugo Teixeira via Royal Society Interface) Menezes recommends that we develop space-friendly microbes that can turn byproducts of wastewater treatment into food (yum!). While the food doesn’t have to be Michelin-star-quality, it does have to qualify as “nutrient-dense biomass that supplements astronaut dry-food while being versatile in flavor and texture.” If the walls of a ship or colony were alive (it’s not creepy), the microbes could up-cycle carbon dioxide into oxygen and would — bonus! — shield astronauts from radiation. Not only does radiation zap our DNA with cancerous mutations, it also makes medicines expire faster.

People will still get sick in space, so synthetic biologists are also working on bio-based medical care. Microorganisms and plants could be engineered to make medicines and to shift the microbiome — the community that lives in symbiosis with each of us — back into order. “If astronauts could grow their medicine in algae I think that would be super cool,” says Josiah Zayner, a space synthetic biologist at NASA’s Ames Research Center, who was not an author on the paper, “but I think it would take a lot of money and resources to make this happen.” But what if the ship or colony were even more alive, Menezes wonders, full of biosensors and biological control systems? If it sounds a little too Battlestar Galactica-Cylon for comfort, don’t worry yet, says Zayner. “Honestly, I think this is just their ‘out there’ idea,” he says. “Systems that they are describing have not really been invented yet. They lost me at ‘hybrid robot version of tumor killing bacteria.’” Me too. But it’s not that out there, contends Menezes. “The space cybernetics grand challenge essentially calls for implementing control systems ideas into biological systems,” he says — the same control systems that put people on the moon and let Curiosity rove on Mars. But with biology. Integrating the two with technology will “take some time,” he continues, but “complete and tested space synthetic biology systems should be ready within a couple of decades, and if not in time for the first U.S. human Mars expedition, certainly by the second or third one.”

An artist's rendering of Martian living quarters covered with soil to shield the crew from the sun’s radiation. (Credit: NASA) But even a cybernetic ship or colony with living walls, algae gardens, and nutrient-dense biomass isn’t quite enough for a self-sustaining, long-lived Martian habitat. To create that, we either need to make Mars a planet like Earth — or we need to make a miniature Earth on Mars. To “terraform” a planet is to Earthify it. But “paraterraforming” is the more realistic step down: turning a smaller, contained space into a self-sustaining, human-friendly place. In the case of Mars, this would be a habitable spot surrounded by god-awful instant-death desert. Scientists would have to engineer an entire ecosystem that creates what astronauts need to eat, drink, breathe, and stay healthy, sane, and productive. All while recycling their waste products and keeping their environment cut off from the aforementioned god-awful instant-death desert — using microbes. “This, I think should be the number-one research goal before missions to Mars,” says Zayner.

And the missions to Mars are what Menezes’ report looks toward. “All of this is coming from the viewpoint of making it to Mars in the next 20 years and not from the viewpoint of what synthetic biology will be doing in 20 years,” says Zayner, “because that is extremely hard to plan for.” And it depends on the available of both cash and people to do the job. Zayner also cautions that any life-based space systems will need to be tested and built years before they appear on a crewed capsule or a colony on the Red Planet. As a result, the bleeding-edge technology that exists when a Mars mission launches probably won’t be part of that Mars trip — well-characterized, older technology likely will be. That’s true in any space mission, which engineers blueprint and begin building many years before launch. But Menezes says the gap between prototype and practical use is shrinking, largely because the space industry is no longer run entirely by a government. “Just yesterday, I learned that there was a recent project that went from concept idea to actual space deployment within six months,” he says. “Although this timeline is atypical at the moment, with the advent of commercial space ventures, it is now possible to partner to quickly test and characterize fruitful ideas in space.” But after the ship launches with its promising technology, problems could arise on Mars, too. The regolith that we might use for construction contains perchlorates, salts that can be toxic to humans. Toxic bricks do not an ideal colony build. “Perchlorates are certainly a problem at the moment,” says Menezes. But we could figure out how to deal with those, and, in our initial attempts at exploiting Mars’s resources, use Mars’s air instead of its land. “For instance, 95 percent of the Mars atmosphere is carbon dioxide. This carbon dioxide will be the primary carbon source for the microbes.” While making our own special-snowflake space biology sounds sci-fi, non-fictional scientists are working to make the concepts nonfictional, too. To engineer organisms that will be useful on other planets, they first look to our own world and its biology. And in altering and organizing those biological beasts into useful space systems, scientists will also learn how to make life better back on Earth. “The possibilities of space synthetic biology are truly endless, yet each of them has immense importance back on Earth,” says Menezes. Synthetic biological solutions to space problems in medicine, food, and carbon dioxide can address similar issues on Earth: personalized medicine, agriculture for growing populations, and fixing our carbon-dioxide-laden atmosphere. And while paraterraformed spaces give astronauts a safe place to sleep, the technologies can also help us learn to live sustainably on Earth. A Martian colony would be the ultimate zero-waste green space, whose ethos every earthling should get behind. “I find the notion of doing ‘far-out space stuff’ that is simultaneously a priority on Earth really captivating and compelling,” says Menezes.