Researchers don't always know how the dogs get the job done — but they know how to train them. 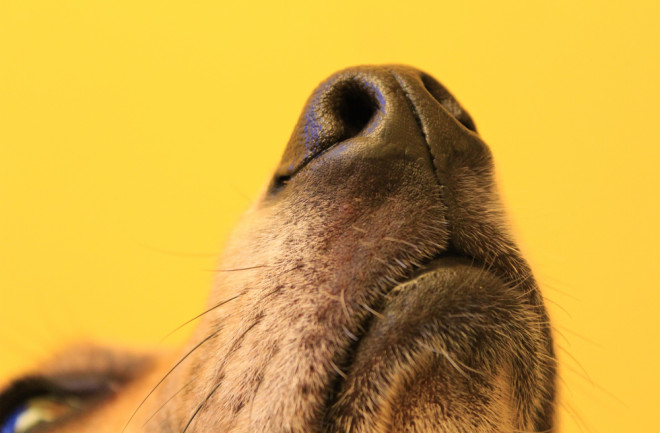 With names like Bella, Duke and Darwin, detection dogs make headlines on a regular basis for the new sniffing tasks they can accomplish. Dogs that have been trained to pick out bumblebees and COVID-19 infections have both debuted in the past year. And if there’s a limit to what our favorite companions can pick up on, it hasn’t been found yet.

“So far, we haven't found anything that doesn't create that odor,” says Cynthia Otto, a veterinarian at Penn State University who has researched training dogs to smell everything from drugs to cancer to infectious disease.

Not every dog is up to the task, particularly when it comes to the most challenging scents. Researchers and trainers think of disease detection dogs, for example, as canine versions of people who love fixing data errors in spreadsheets. “Not all of our dogs have that attention to detail, or persistence,” Otto says. But those who have the skills rely on scents that researchers have yet to fully understand.

In some cases, scientists know what chemicals the dogs smell when they identify the right odor and sit, freeze or lay down in response. A few years ago, Jennifer Arnold, the founder of the service dog training facility Canine Assistants, approached Kenneth Furton’s lab at Florida International University for help: People with seizure alert dogs had begun to tell her their aids seemed to pick up on a coming episode before they themselves were aware of it. Was it possible the dogs smelled something distinct in their humans around when the seizure kicked off?

The lab dug into this question by collecting sweat samples from epilepsy patients — sweat from right after seizures and sweat from other situations in their day-to-day life. Comparing the two showed that nine compounds existed only in the seizure sweat, while three in particular carried the “seizure smell” the most for the dogs. The researchers trained a group of dogs to identify a lab-made mix of those chemicals, and later introduced the pups to actual sweat samples. The dogs could correctly identify which swabs came from seizures.

One of the chemicals recovered from the seizure sweat that seemed most important to the dogs was menthone. The molecule is a precursor to menthol, which gives peppermint some of its sharp, cooling sensation. It’s not clear how our bodies make menthone, says Edward Maa, a neurologist at the University of Colorado, and most of the time, researchers don’t think of humans needing to produce any smells when in distress. “We don't typically think of humans as needing alarm pheromones because we have speech,” Maa says.

But a possible explanation for the smell occurred to him while he was watching the movie It with his son. Fear triggers sweat, too — and once in the lab, Maa and his colleagues showed people who didn’t have seizures the same film and took samples of their perspiration. The dogs trained to smell seizures identified the scary movie sweats as seizures in four of the five participants.

Maa thinks that the neural circuitry involved in seizures might be linked to our fear responses, which might explain why the sweat from both seems similar to dogs. “It’s a bit of a stretch,” he says. But even if it’s not totally clear how humans make menthone, having isolated the scent of a seizure means that dogs can be trained on the pure odor alone. Theoretically, isolating the scent of a health condition and training dogs on it might be the easiest way to go about the learning process, Otto says. It’s a tactic some COVID-19 researchers are using: The teams expose dogs to mixes of the viral proteins in the hope that whatever scent is available in the lab version appears in humans, too.

Handlers and scientists can also let dogs figure the scent out on their own. When sniffing swabs from people who do and don’t have a condition, dogs learn to parse all the smells and find the one that is present (or absent) because of the illness. Otto and her colleagues use this approach in their research into whether dogs can diagnose COVID-19 infections. It’s also handy for situations where researchers have yet to isolate the responsible chemicals, like when blood sugar drops in diabetics.

Too Tired to Sniff

For a dog to tease out a tell-tale odor, he or she has to sniff past all the things that make each person distinct and find the one whiff appearing in every person who has the disease. “It’s like concentrating so hard, and you can only do that for so long. You need a break,” Otto says.

Maa and his team ran into this fatigue in their studies. To estimate how long before and after a seizure a dog could detect the right smells, the team took hourly sweat samples from epilepsy patients in a controlled hospital state where patients have seizures so that researchers can see how each episode plays out in their brains. The dogs could identify the seizure smell an average of 68 minutes before onset. While it would have been nice to get more precise timing and have dogs sniff every 15 minutes, it wouldn’t have worked, Maa says. Even with hourly whiffs, the dogs eventually struggled to focus.

Because this is exhausting work, dogs will take any shortcuts they find, Otto says. If they can rely on a scent that’s associated with someone who has the disease but is easier to pick up on, that’s the cue they’ll work with. To train a dog to find only the smell indicative of the disease, researchers have to introduce samples from hundreds of people. Too few swabs and dogs will associate the illness with the general scents of one or two people, and that’s no use, Otto says.

Of course, it’s not the dog’s fault when a human uses too few samples for training purposes — it’s just one of many mistakes people can make when they underestimate their companions. “Dogs are so smart, and so attentive to human body language. We sometimes, inadvertently, give them cues,” Otto says. If someone walks a dog past scent samples and knows which ones are the target smells, a raised eyebrow or slight hesitation can tip a dog off to what response people are looking for. Training programs have to avoid any possibility of bias and possibly be double-blind — where the trainer with the dog also doesn’t know which sample is which.

Maa, who had never worked with detection dogs before the seizure studies, was surprised at just how perceptive his canine research companions were. While watching them sniff out smells no human could perceive, he realized the question wasn't whether the dogs were smart enough, he says. "The issue is, can you train the human to understand the communication of the dog?"

More From Discover
Health
Are Cooking Fumes Bad for Your Health?
Planet Earth
The World's Most Active Volcano Sprouts Pele’s ‘Hair’ and ‘Tears’
The Sciences
The Century-Old Process of Making Decaf Coffee
Environment
Will Chemical Recycling Solve Our Plastic Problems?
Environment
Are Lab-Grown Diamonds Forever? Depends on Who You Ask
The Sciences
How Science Is Saving van Gogh's Flowers Before They Fade Away
Recommendations From Our Store
My Science ShopCosmos: Possible Worlds
My Science ShopStrange Science
My Science ShopEinstein's Universe
My Science ShopElements Flashcards
Shop Now
Stay Curious
Join
Our List