How DNA Can Help in the Search for Dark Matter

An exotic DNA-based detector could spot dark matter and the direction in space it came from, say researchers. 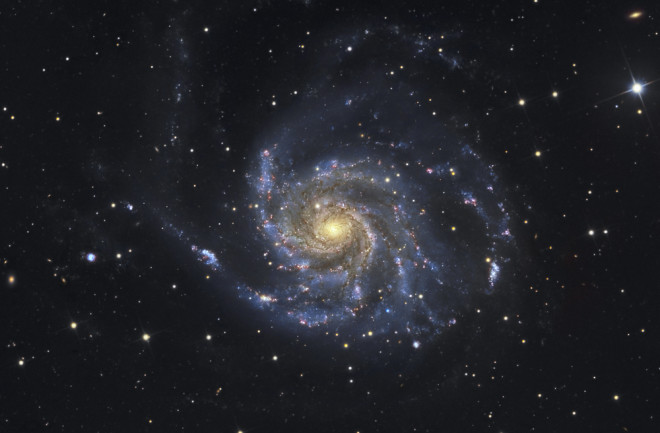 The XENON1T dark matter experiment consists of a giant vat of liquid xenon in an underground chamber beneath the Gran Sasso mountain in Italy. Its task is to search for evidence of dark matter that astronomers cannot see but think fills the universe.

Because the Solar System is moving rapidly through the universe, the Earth ought to be ploughing through this ocean of dark matter. So any dark matter collisions inside XENON1T should come from our direction of travel.

But there is a problem with XENON1T, and other dark matter detectors like it. Although it ought to be able to see evidence of dark matter particles, it cannot tell which direction they are coming from. And that places significant constraints on what physicists can deduce from the data. What they’d like instead is a detector that can map the tracks that dark matter particles make as they pass through.

Now Ciaran O’Hare, at the University of Sydney in Australia, with colleagues, say they think they know how this can be done. The team is working on the design of an exotic new form of detector that can spot not only the presence of dark matter but also the direction in which it is travelling. The team have simulated for the first time how dark matter particles would interact inside the machine and say it has significant advantages over the current generation of detectors.

The new detector has a unique design based on DNA strands. It consists of a forest of double-stranded nuclei acids that hang from layers of gold metal sheeting. Each DNA strand is unique and its position within the detector known with nanometer resolution.

When a dark matter particle enters the detector, it slices through any DNA strands in its path, causing the broken segments to fall into a microfluidic collection system. “Since the sequences of base pairs in nucleic acid molecules can be precisely amplified and measured using polymerase chain reaction (PCR), the original spatial position of each broken strand inside the detector can be reconstructed with nanometer precision,” say the team. In this way, physicists can reconstruct the track of the dark matter particle through the machine.

The idea behind the DNA detector was put forward in 2012. The new work is the first simulation to test how the detection would work for dark matter particles of different types, energies and directions. “We conclude that a DNA detector could be a cost-effective, portable, and powerful new particle detection technology,” say O’Hare and co.

The new approach has other advantages over traditional dark matter detectors. The device is tiny compared to the behemoths used to detect dark matter today — portable even. It would also be significantly cheaper.

However, it is by no means perfect. The DNA detector does not provide enough information to easily identify the type of dark matter particle involved or even its precise energy. For that reason, these detectors are likely to be used in conjunction with the data from traditional machines.

Instead, its main advantage is its ability to determine the direction the particles came from. “Dark matter signals are expected to be strongly directional, a phenomenon generated by the orbit of the Solar System through the dark matter halo that envelopes our galaxy,” say O’Hare and co.

“A search for recoil tracks aligning with the direction of our galactic rotation would permit a convincing test of the veracity of any potential dark matter signal but would also allow it to be cleanly distinguished from sources of background noise such as cosmic rays, radioactive decays, and neutrinos.”

There is much work to be done. Last year, physicists found enigmatic evidence in the data from XENON1T suggesting something unusual. Exactly what, they are not sure and are currently hoping for more data to better study the effect.

If dark matter exists, a range of detectors will be needed to characterize its properties and how the Earth is ploughing through it. If dark matter doesn’t exist, all bets are off!