How Did Saturn Get Its Rings?

Astronomers have learned a lot about Saturn's rings since Galileo discovered the ringed planet, but there's still many mysteries to be solved. 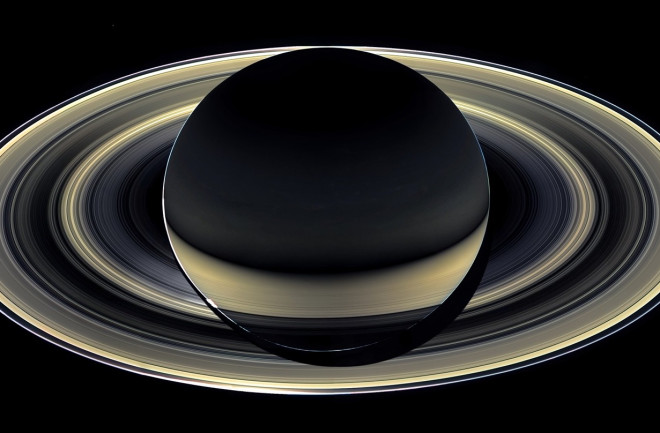 Astronomers know a lot about Saturn’s ring system. They’ve known about it for centuries, ever since Galileo first spotted it with his telescope in 1610. It’s made out of ice and rock particles, some as big as a minivan. And the rings are super flat, like a razor-thin CD that’s 170,000 miles across, but only a couple dozen yards thick.

But despite all that, there’s still lots we don’t know. Like, how old are Saturn’s rings? And how did they form?

See, age is a tricky thing for astronomers to measure.

They have to figure it out sort of indirectly — by measuring things like mass, and color, and what the rings are made of — and then piecing together what they all mean about the rings’ age.

So from astronomer’s measurements, we know Saturn’s rings weigh about 33 million trillion pounds. That may sound like a whole lot. But, for comparison, that’s less than half the mass of Saturn’s moon, Mimas.

We also know they’re made of almost entirely ice — about 95 percent pure water ice, with another 5 percent rock and metals.

And we know that over time, the rings are fading. That’s because the particles within the rings are colliding with each other, and have a gravitational influence on each other, which causes them to spread out. Some of the material rains down onto Saturn. Eventually, they’ll essentially fade away.

The other way the rings are changing is their color. Space dust and meteorites fall into them, which makes them appear darker over time.

So if researchers know how fast the color and mass and brightness of the rings should be changing, and they know what they look like now — that’s a pretty good starting point for estimating their age.

So that’s a huge range. But it’s not random. Here’s the problem.

Based on their color, Saturn’s rings seem young. They’re pretty bright, reflecting a lot of the light that hits them, like our own moon. They don’t look as polluted as astronomers think old rings should.

So that means, the rings must be young. Right?

If the rings formed after the planet, not with it, all that ice and rock and metal had to come from somewhere. Astronomers’ calculations show it would’ve taken a collision of the planet with something huge — a moon the size of Mimas, or maybe a large, passing comet. And both of those seem pretty unlikely.

Ok, fine, the rings are old?

But if they’re old then it’s weird then that the rings are still around. Even despite their huge mass — rings that old should have faded away already.

Some newer studies are trying to make sense of this, suggesting that maybe the rings are old and formed with the planet 4.5 billion years ago, but scientists are just overestimating how quickly they should be fading. Or maybe, there’s something we don’t know about that keeps them looking young and fresh, despite their old age?

So, that’s the question we’re left with right now: Are the rings actually young, or is something just making them look young? It all depends on how you calculate how the rings should be changing over time.

It may seem like an unsolvable problem, but astronomers have hope.

If NASA launched another mission to Saturn that would intensely study the rings — scientists could get enough info to finally solve this mystery.