How Big Is the Andromeda Galaxy? 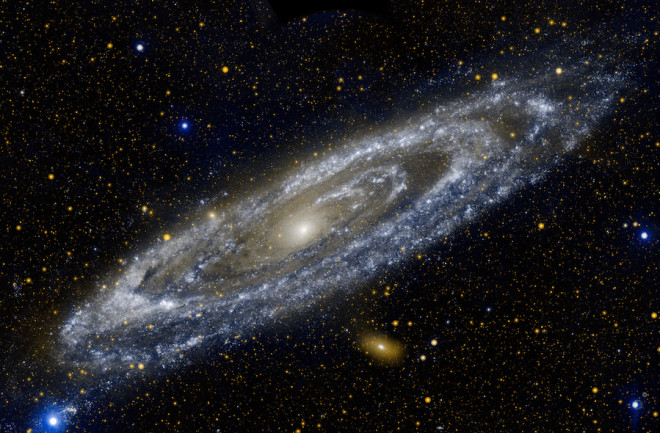 This image of the Andromeda galaxy, captured by NASA’s Galaxy Evolution Explorer, shows the ultraviolet side of our familiar galactic neighbor. (Credit: NASA/JPL-Caltech) Both the Milky Way and the Andromeda galaxy (M31) are giant spiral galaxies in our local universe. And in about 4 billion years, the Milky Way and Andromeda will collide in a gravitational sumo match that will ultimately bind them forever. Because astronomers previously thought that Andromeda was up to three times as massive as the Milky Way, they expected that our galaxy would be easily overpowered and absorbed into our larger neighbor. But now, new research suggests we’ve overestimated our opponent.  In a study published today in the Monthly Notices of the Royal Astronomical Society, a team of Australian astronomers announced that Andromeda is not actually the heavyweight we once thought it was. Instead, they found that our nearest galactic neighbor is more or less the same size as the Milky Way — some 800 billion times the mass of the Sun. To determine the size of the Andromeda galaxy, the team used a technique that calculates the speed required for a quick-moving star to escape the gravitational pull of its host galaxy. This required speed needed for ejection is known as an object’s escape velocity.

“When a rocket is launched into space, it is thrown out with a speed of [6.8 miles per second (11 kilometers per second)] to overcome the Earth’s gravitational pull,” said Prajwal Kafle, an astrophysicist from the University of Western Australia branch of the International Centre for Radio Astronomy Research, in a press release. “Our home galaxy, the Milky Way, is over a trillion times heavier than our tiny planet Earth, so to escape its gravitational pull, we have to launch with a speed of [342 miles per second (550 kilometers per second)]. We used this technique to tie down the mass of Andromeda.” This is not the first time a galaxy’s weight has been recalculated based on analyzing the escape velocities of objects within it. In 2014, Kafle used a similar technique to revise down the mass of the Milky Way, showing that our galaxy has much less dark matter — a mysterious form of matter that has gravity but does not interact with light — than previously thought.