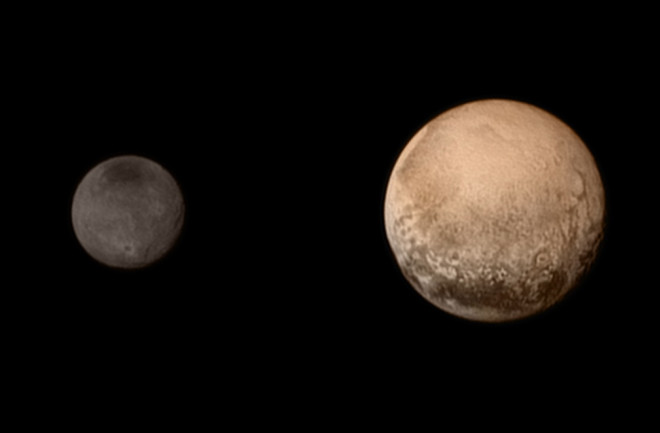 Pluto and its moon Charon (brought nearer together, but sizes kept same) Credit: NASA With less than 24 hours to go before closest approach, NASA’s New Horizons spacecraft is seeing Pluto at a level of detail that grows sharper literally by the minute — not surprising when you consider that it is closing in on its target at nearly 31,000 miles per hour. Late Monday morning, members of the mission science team held a news briefing at the Johns Hopkins University Applies Physics Lab in Laurel, Maryland, site of mission operations. Principal Investigator Alan Stern broke some major discoveries from the past few days. Perhaps most importantly, the science team has refined Pluto’s radius to 736 miles (plus or minus 6 miles). This is on the high end of previous estimates and, when combined with the ice dwarf planet’s known mass, implies a lower density than thought and thus a higher proportion of ice forming its bulk. Earlier assessments of Pluto’s size were fraught with uncertainty because the atmosphere, thin as it is, makes it difficult to pinpoint the world’s actual surface from Earth.

New Horizons also has detected nitrogen escaping from Pluto’s atmosphere far sooner than models had predicted. (Pluto is one of only three objects in the solar system known to have a nitrogen-rich atmosphere, joining Earth and Saturn’s moon Titan.) The probe started picking up nitrogen five days before closest approach; researchers expected to see it only 24 to 48 hours before the flyby. The science team will need some time to figure out exactly why. Finally, New Horizons has confirmed the existence of a polar cap on Pluto. Spectra of the region show it consists largely of methane and nitrogen ices.

The pace of discoveries will only quicken over the next few days as New Horizons flies past the distant world and starts sending home its observations. Stern likens the mission’s 9.5-year flight through space now culminating with the flyby to spending years riding an escalator and then immediately hopping onto a supersonic transport. Here’s a quick recap of what you can expect on Tuesday. New Horizons makes it closest approach to Pluto at 7:49 a.m. EDT at a distance of 7,770 miles (12,500 kilometers) from the surface. The craft will be busy conducting its most detailed surveillance at this time, however, and will follow that up over the next few hours with critical observations of the planet and its largest moon, Charon, as they pass in front of the sun and Earth. The spacecraft will then signal home that it survived, which will arrive at Earth around 9 p.m. EDT following its 4.5-hour journey across interplanetary space. Then the celebrations can begin in earnest, followed shortly thereafter by the downlink of some of the most important close-encounter observations. Check back here tomorrow for our live coverage of the events as they unfold!