How Astronauts Deal With Emergencies 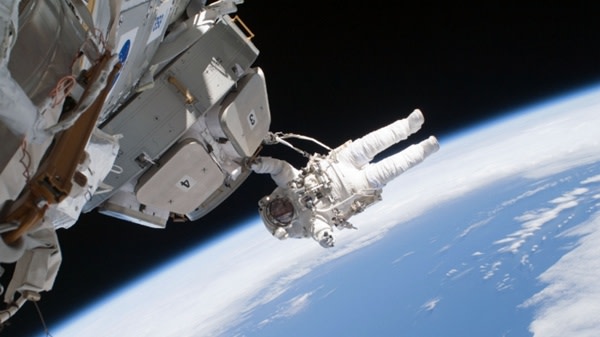 (Credit: NASA) We’ve been looking up at the stars for centuries, but it’s only in the last few decades that we’ve been able to actually think about exploring them. Space is still one of the harshest environments that we’ve ever discovered — colder than most people can imagine, with no oxygen and plenty of radiation to increase the risk of cancer and other dangerous diseases. When an emergency happens in space, there’s no one to come to the rescue. So how do astronauts handle it?

The History of Space Emergencies

There are plenty of emergencies for us to pick from in science fiction movies and novels, but there are harrowing incidents to pick from in the real world, too. First, let's take a look at the history of space travel and outer space emergencies. Apollo 13 is probably the most immediately memorable. In 1970, Apollo 13 launched from Cape Canaveral and was en route to the Moon when, 56 hours into the mission, one of the craft’s oxygen tanks exploded. Instead of landing on the Moon, as they had planned, the crew and the Ground Control team had to figure out how to get the astronauts home. Ground Control was able to talk the astronauts through some minor repairs — such as rigging a replacement filter for the CO2 system responsible for keeping their air breathable — and bring the crew home. The crewmembers of the Soyuz 11 are the only people who have died in space — three cosmonauts were asphyxiated just before reentry because an air vent had opened during the automated descent phase, exposing them to the vacuum of space. The craft landed safely on autopilot, but the astronauts had died during reentry. After the Columbia disaster, NASA put a rescue program into place for the remaining space shuttle flights. There was no backup shuttle available immediately, so the plan called for astronauts to shelter on the International Space Station and await either a second shuttle (which could take up to 40 days to prepare) or rely on the Russian Soyuz vehicles to bring back only one astronaut at a time. 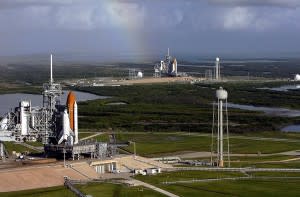 A rare sight: Two space shuttles prepped for launch simultaneously; Atlantis sits in the foreground on Launch Pad A, while Endeavor sits in the background on Launch Pad B. (Credit: NASA/Troy Cryder) There was, at one point, a backup shuttle prepared. When the space shuttle Atlantis was launched for the STS-125 mission to service the Hubble Space Telescope, the Endeavour was also ready as a backup in case something went wrong and the crew of the Atlantis needed to be evacuated quickly. There would have been no way for the Atlantis crew to make it to the International Space Station, because Hubble is in a much lower orbit.

What sorts of emergencies could happen out in space? Medical emergencies can occur in outer space just as often as they happen here on Earth, but being in orbit means that the astronauts are hundreds of miles straight up from the nearest doctor — and they don’t always send medical doctors into space. That’s why all astronauts receive basic medical training. Even things like CPR, which is standard procedure here on Earth, can be difficult without gravity to hold the patient to the ground. Micrometeorites are another hazard astronauts may encounter in space. These tiny pieces of space dust get accelerated to supersonic speeds, and even a flake can be devastating. A hole in the hull of the International Space Station can create a massive emergency — venting oxygen makes it hard to breathe and could potentially push the station out of its orbit. This became all too real recently when astronauts aboard the station discovered a tiny hole on the Russian side. Though it was small enough that there was no immediate danger, astronauts still had to scramble to improvise a fix. One crew member initially improvised with his thumb until the hole was taped, and eventually fixed more permanently with epoxy. There’s no official plan in place to repair the hull in the event of a breach, though. If the compartment can't be isolated and fixed later, the emergency plan in place is to shut down the station and evacuate back to Earth in the attached Soyuz module. Fire can also be a problem in space. This became starkly apparent in 1997, during a fire aboard the Soviet MIR space station. A faulty lithium-perchlorate canister — used to produce oxygen on MIR — ignited faster than intended, creating a fire that blocked the astronauts’ escape route to one of the two vehicles needed for evacuation. Only three of the six crew members on board could have left. When you’re dealing with fire in space, you’re also dealing with the fact that fire burns oxygen, which is in limited supply. 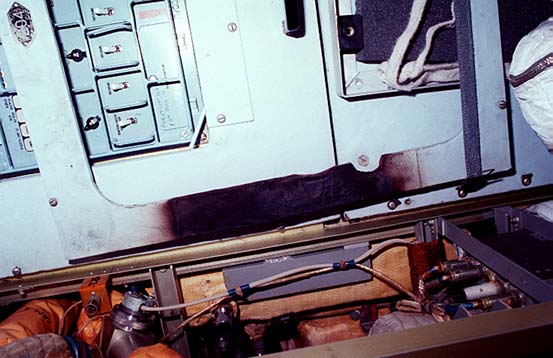 Damage to the interior of the space station Mir after the 1997 fire. (Credit: NASA)

Radiation is another significant risk factor for astronauts. Here on Earth, the planet's atmosphere protects us from this hazard, but astronauts orbit far outside of this shield. The Earth's magnetosphere extends out far enough that it protects the ISS from the majority of the ambient radiation, but not all of it. The space station is equipped with sensors, and astronauts have both their short-term and lifetime radiation exposure levels monitored. If the lifetime levels get too high, the astronauts are no longer allowed to travel into space.

To Mars and Beyond

These potential emergencies can happen in orbit around our planet, but they can also occur as we explore the rest of the solar system (and even the universe). Right now, our eyes are set on our neighbor Mars. The atmosphere there can't support human life, so the same precautions we take now for our astronauts in orbit will have to carry us onto the martian surface.

On the planet’s surface, we also have things like dust storms to contend with, such as the massive storm that knocked the Opportunity rover offline earlier this year. Although martian winds rarely rise above 60 miles per hour, any people or equipment on the surface of the Red Planet will likely still need protection from this potentially dangerous weather.

The foremost thing that astronauts have to remember to stay safe in the void is to remain calm. On Earth, you often have the option (and resources) to panic a little bit. In space, panicking could result in death. NASA has plenty of redundancy plans to help keep its astronauts safe. Nearly 50 years ago, Mission Control was able to talk the Apollo 13 astronauts through putting a square peg in a round hole (literally) to repair the module's CO2 filter with nothing more than some duct tape and a sock. That innovation has only evolved over the intervening decades. The safety of our astronauts is the most important thing to the scientists and engineers who create the rockets that carry them to the stars. Even if emergencies do occasionally happen, these astronauts are prepared for just about anything.