How Apollo Astronauts Didn’t Get Lost Going to the Moon

Traveling to the Moon is much more complicated than ready, aim, fire. 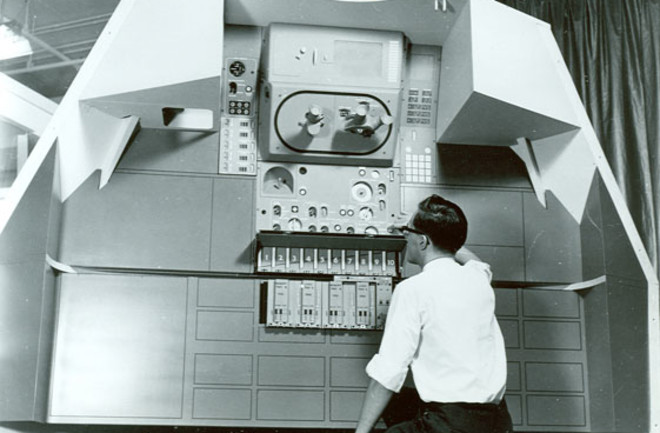 A mockup of the Apollo Guidance Computer that navigated Apollo’s way to the Moon. (Credit: MIT Library)

Driving, say, to a friend’s house, we usually have directions to follow like “turn left at the light then it’s the third door on the right.” The same isn’t true when going to the Moon; there are no signposts guiding the way. So how exactly did Apollo astronauts know where they were going when they went to the Moon?

This one is tough. You can’t just launch a rocket towards the Moon and expect it to get there. There are gravity wells in space, and burns are rarely perfect so errors are part of the process. So how exactly did astronauts figure out where they were on the way to the Moon with enough precision to correct those errors and get where they were going?

For those of you who, like me, need to read things to really grasp it, here’s a more detailed look at what’s in that video.

Let’s start with dead reckoning on a boat, because that’s the easiest comparison to understand. When you’re sailing by dead reckoning, you use a compass, a knotmeter, and a clock to break the question of navigation into time, rate, and distance. You can calculate your position at any point on your journey via a previously determined fixed position. Knowing your speed, how long you’ve been sailing, and in which direction since you last checked your position, you can determine where you are by how much your position has changed relative to that fixed spot. Sailors would do this check as often as every hour.

Knowing that dead reckoning doesn’t account for variables like currents or steering errors, sailors would check their position by a sextant, using the Sun, Moon, planets or stars.

Going to the Moon is the same thing, but in three dimensions … and also thousands of times faster! So the instruments are a little more sophisticated. Instead of a compass, astronauts relied on a gyro-stabilized “stable table” to keep track of direction. Instead of a knotmeter, accelerometers on that stable table tracked every little change in speed. The electronic clock ticked a million times a second. Instead of water currents, gravity produces unfelt changes to the course, so the computer ran the math model of gravity created by Isaac Newton. But otherwise, the astronauts’ situation was similar enough to that of Earthly sailors to use similar technology, which means instead of a marine sextant, astronauts used a space sextant.

Embedded in the Apollo command module opposite the hatch were two telescopes. The first was a single magnification spotting scope that gave the astronauts a wide field of view. From that wide field, he could pick a fixed point like a star (which is unmoving enough for the sake of a navigation reading) or a point on Earth. Then he’d move over to the second instrument — the a space sextant — a disk and slit apparatus designed to measure angles.

The space sextant had two lines of sight, one fixed and one movable. The fixed was able to focus on a landmark on Earth such as San Francisco Bay (giving it the name landmark line of sight or LLOS) and was controlled by adjusting the attitude of the whole spacecraft to center the landmark in the LLOS. When such a landmark wasn’t available, the spacecraft could put the LLOS on a point of the sunlit horizon on Earth or Moon. The second line of sight was the star line of sight (or SLOS). This one could be moved as far as 67 degrees from the fixed line of sight.

What the astronaut did was focus on the star with the SLOS, then fiddle with the mirror inside the sextant to bring the image of that star into conjunction with the landmark or horizon in his fixed scope, the LLOS. When he felt the alignment was as close as possible, he punched the Mark button that told the computer to read the angle between that star and the horizon, and note the exact time. Doing this again with a second star, and sometimes a third, gave the computer enough data to run through the navigation program and determine where the spacecraft was!

A few things to keep in mind because this sounds too complicated to work, right? The “stable table” meant that the spacecraft’s orientation didn’t move; during a navigation check the crew oriented the spacecraft and it held that orientation perfectly. Also, the stars are moving, as are the planets and moons, but again, they’re unmoving enough to get a good navigation check. And finally, we have to remember no crew went to the Moon unprepared. Not only had Apollos 8 and 10 preceded Apollo 11 and checked the guidance system, the engineers from the MIT Instrumentation Lab (now called Draper) brought centuries of knowledge of the stars to bear on the problem. The computer knew the positions of stars and bodies that would be used for sightings, namely the Earth and the Moon, which made realtime navigation calculations a relative cinch!

The question of “where are we” in going to the Moon is the middle initial in the acronym GNC — guidance, navigation, and control. Guidance means deciding what changes in velocity are required to make the spacecraft go where you need it to go. Control refers to operating the engine hardware to get the spacecraft where it needs to go. Taken together, the GNC programs got Apollo to the Moon.

Sources: How Apollo Flew to the Moon by W. David Woods. The Apollo Guidance Computer by Frank O’Brien. Interviews with current and former Draper engineers. This video was done in collaboration with Draper, who signed off on the explanation.