Florida's 30-year-old Aquarius Reef Base has housed hundreds of ocean researchers, divers and NASA crews preparing for space, for days on end. 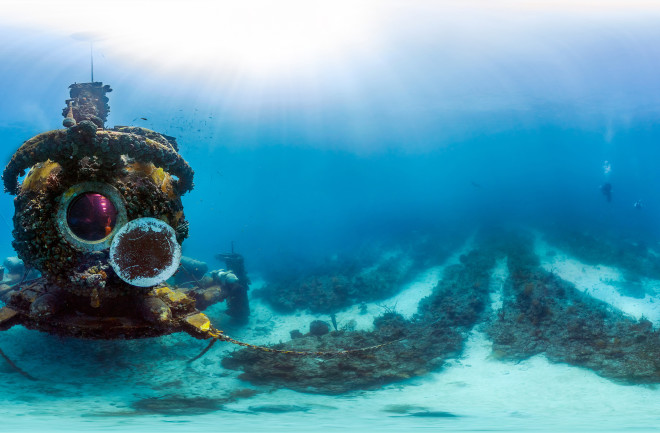 For some time now, humanity has been saying we know more about the surface of the moon than the floor of the ocean. While space exploration attracts headlines and eye-popping budgets, understanding the depths of our own planet often garners less interest. But, along a coral reef off the coast of Florida, a one-of-a-kind underwater lab is facilitating ocean research while also preparing generations of astronauts.

The Aquarius Reef Base, now known as FIU Aquarius, was built in 1986. Originally deployed in the U.S. Virgin Islands, the sea lab surfaced after damage from Hurricane Hugo in 1989, then moved to Florida in 1993 following repairs. After being operated by the National Oceanic and Atmospheric Administration for some time, Florida International University (FIU) now owns and runs the facility. By using saturation diving techniques, Aquarius’ aquanauts adjust to life below 62 feet of water. They stay at depth for days or weeks, allowing them to perform lengthy excursions that would be impossible for divers descending from and returning to the surface.

Aquarius’ voluminous research has included insights into the intricate ecosystems of coral reefs and humanity’s impact on them. The extreme environment has also allowed for studies on human physiology and the challenges of telemedicine. From 2001 until a COVID-induced halt in 2019, Aquarius worked with NASA to host 23 NEEMO missions (NASA Extreme Environment Mission Operations), where astronauts-in-training got to simulate spacewalks and adjust to life in a cramped environment where you can’t exactly pop out for a walk if a crewmate gets on your nerves.

As of 2017, only 392 people had spent at least one night in Aquarius. Mark “Otter” Hulsbeck, who retired in April 2021 after 22 years of work with Aquarius, spent a record 292 days underwater, including a 31-day stint with the grandson of Jacques Cousteau. When he came to Aquarius in 1999, communication with humans on land was limited to a phone line and VHF radio connection with a base on shore. Today, Aquarius has Wi-Fi, allowing aquanauts to watch Netflix, chat with classrooms, and stay in touch with their families.

“I went to sea in the Navy and National Oceanic and Atmospheric Administration Corps (NOAA) for extended periods, so that helped with my mindset,” Hulsbeck says. “Family separation is hard, but modern tech allows for Facetime, etc. As a habitat technician, we had daily duties and routines that kept us busy. I never got tired of living underwater.”

It helped that, while the environment is hostile, it’s also beautiful.

Some of the challenges aquanauts and astronauts face are mundane; not everyone can share 400 square feet with five other people, especially if you can’t get a pizza delivered at the end of a long day. NASA’s one to two week NEEMO missions helped astronauts adjust to the realities of professional cohabitation.

“NEEMO were some of my favorite missions,” Hulsbeck says. “Each NASA aquanaut said how analogous the Aquarius experience was to the International Space Station.”

He added that the astronauts typically caught on quickly to daily life underwater. “These folks are the cream of the crop and highly disciplined,” he says. “I participated in one mission where we ate NASA food for the entire mission. I do not recommend it.”

In Aquarius, crews eat a lot of dehydrated camping food, though there is a microwave for other items. Hulsbeck noted that enough hot sauce can make any meal palatable, and Aquarius has one culinary advantage: It’s loaded with snacks like Pringles, nuts and M&Ms. Aquanauts can spend up to nine hours a day diving, which chews through calories and earns them a few treats. Those lengthy dives are another key component of NEEMO, as hours spent underwater can prepare astronauts for the demands of a spacewalk.

NEEMO missions have also used weighted suits, mock vehicles and artificial communication delays to simulate work on Mars and the moon. Although heading home from the sea is a tad easier than space travel, it requires some special procedures. When aquanauts are ready to return, they decompress for 17 hours in Aquarius’ wet porch before swimming to the surface.

The Future of Sea Research

Aquarius is not a household name, and oceanography receives only a fraction of the funding that space exploration does. While the 20th century saw the construction of over 60 undersea labs, only Aquarius is still in operation today. And it endured a 2012 funding crisis after government cuts left it imperilled until Florida International University took over. While NASA has a budget of $24.8 billion, NOAA is working with $ 5.65 billion. And the latter organization lacks a flashy private partner like SpaceX. Space exploration certainly has its place, but the oceans represent a more immediate tie to humanity’s future.

“I’m not against space exploration, but the exorbitant amount of money spent on it is hard to justify in my mind,” Hulsbeck says. “The oceans, occupying 2/3 of the planet’s surface, are a crucial piece of the climate change puzzle that we cannot afford to ignore.”

Human activity, including pollution and greenhouse gas production, has affected oceanic temperature and acidity, the diversity of marine ecosystems, and the intensity of storms, according to most climate scientists. These and many other changes have, in turn, increased costal flooding and threatened food supplies. It’s a cyclical relationship that still isn’t fully understood, making facilities like Aquarius essential.

“Ocean research is critically underfunded, which points to the political realm,” Hulsbeck says. “Space exploration is ‘sexier’ and is making a huge comeback after a slow period.”

With that in mind, Hulsbeck points out that satellites have helped with ocean observation and monitoring weather phenomena. These are great contributions to our understanding of the sea and the dynamics of climate change. Whether popular interest in oceanography can be rebuilt to what it was in Jacques Cousteau’s heyday is questionable. It’s difficult to compete with the drama of space exploration. But regardless of the attention it gets, Aquarius will continue to work towards a better understanding of our own planet.