Between zero gravity and small sleeping quarters, astronauts have to sleep in space, even if it’s difficult. 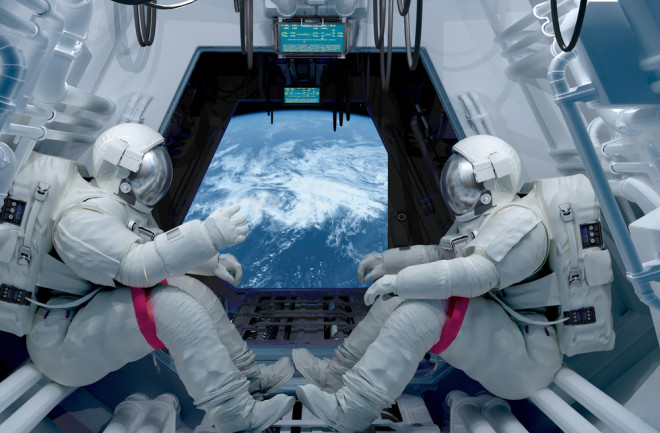 In 1963, Gordon Cooper piloted the longest and last Mercury spaceflight: Mercury-Atlas 9. While Cooper was up in space, on a 34-hour mission, he became the first American to spend an entire day in space and the first to sleep in space. But how does an astronaut sleep in space? They do it carefully, and it’s vital they do. A lack of sleep can cause fatigue that can lead to errors while performing critical tasks. If a groggy astronaut does something wrong, it could be a matter of life or death.

Cooper was launched on May 15, 1963. He orbited Earth 22 times and slept as he spun around the globe. He returned to earth, emerging from the capsule. His sleeping quarters were cramped.

On the International Space Station (ISS), an astronaut sleeps in quarters roughly the size of a phone booth. They cocoon themselves in a sleeping bag tethered to a wall. There is no “up” or “down” in space. With zero gravity, an astronaut floats around the cabin while sleeping, potentially injuring themselves if not tethered in place.

“It felt odd,” notes Scott Kelly in a recent interview. Kelly is a retired astronaut who spent 520 days in space. It was strange for Kelly to sleep without the weight of a blanket or the comfort of a pillow to rest his head.

“Eventually, I was sleeping with my head kind of Velcroed to a cushion, so it feels like your head is up against a pillow,” says Kelly. An astronaut’s sleeping quarters needs good ventilation. In the weightless environment of space, astronauts expel carbon dioxide that could form a bubble around their heads. They sleep near an air vent to avoid this potential lack of oxygen to the brain. Brain cells are sensitive. In less than five minutes, brain cells can start to die without oxygen. Brain hypoxia can cause brain damage, or worse, death. Space is silent, but a spacecraft is not. Space is dark, but the sun is not. Astronauts wear earplugs to combat the noise and face masks to combat bright light. The ISS goes 17,100 miles per hour. That means an astronaut aboard it can see 15 or 16 sunrises a day. As Scott Kelly notes, “Even though you have window shades on the windows, the sun in space is really bright, and it seeps through them.”

Astronauts have reportedly had dreams and nightmares in space. Some astronauts snore in space, as well. Crews on the ISS average around six hours of sleep per day. NASA schedules their astronauts with eight to 8.5 hours of sleep.

Astronauts frequently suffer from the effects of sleep deprivation and circadian rhythm disruption. A lack of sleep can lead to mood swings, weakened immunity, high blood pressure, poor balance and other deleterious effects.

A Challenge to Astronauts

Though Cooper was the first American to sleep in space, cosmonaut Gherman Titov was the first human to ever sleep in space. The second human to orbit the Earth, Titov’s flight on August 6, 1961, proved that humans could live, work and sleep in space. He did it aboard Vostok 2, orbiting Earth 17 times. Cooper would orbit the Earth again in 1965 aboard Gemini 5 with Pete Conrad. Their mission was nearly eight days long, enough for a crew to fly to the moon and back. Neil Armstrong and Buzz Aldrin were both members of the Gemini 5 backup crew. Sleep would prove challenging for Cooper and Conrad. Cooper called the mission “Eight days in a garbage can.” The can was the space capsule. The cabin was the size of the front seat of a Volkswagen Beetle. On October 4, 2004 Gordon Cooper passed away at the age of 77 in Ventura, Cali. In an eternal sleep, his ashes were sent up into space, to sleep with the stars.