NASA's Mars helicopter is about to take space travel where it has never gone before. 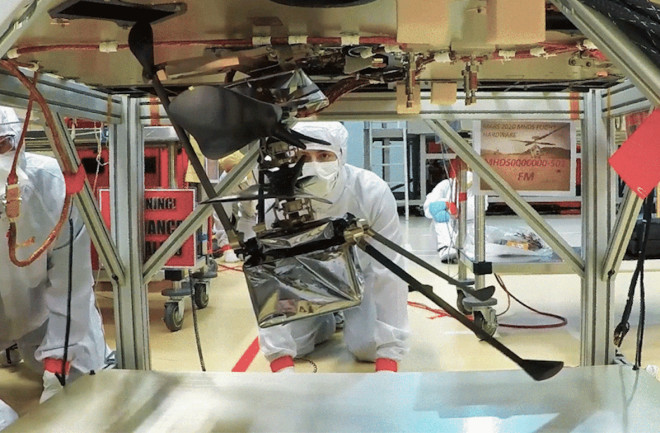 If you're like most people, you've dreamed of flying (studies show that more than half of us have done it). If you're curious about the universe, you've probably also dreamed about visiting other planets. And if you're willing to wait about nine months, you are in luck — because after that, you won't have to dream anymore.

Ladies and gentlemen, NASA is about to go flying on Mars.

The Perseverance rover, scheduled to land on February 18, 2021, is carrying a grapefruit-sized helicopter named Ingenuity strapped to its belly. Assuming all goes well with the touchdown, Perseverance will settle into its new home for about two months. Then it will release a small debris shield, fire a pyrotechnic cable-cutter, unleash a spring-loaded arm and set the little Ingenuity flyer free.

After the rover has rolled a safe distance away, Ingenuity will soak up sunlight to charge its six lithium-ion batteries, like a newly emerged butterfly drying its wings. Then it will spin its twin rotors up to 2,400 rpm and begin a series of exploratory flights on Mars. That ultra-high rotor speed, necessary to generate lift in the thin air of Mars, means each of Ingenuity's flights won't last long (officially just 90 seconds) nor will it go very far (1,000 meters maximum). Still it's the principle of the thing. The first flight of the Wright Brothers covered just 37 meters.

Ingenuity will establish an equally impressive precedent: the first powered flight on a world beyond Earth. It will surely not be the last.

Science and science fiction visionaries have been sketching out ideas for flying on Mars for decades, even before the existence of NASA and space rocketry. The 1918 film A Trip to Mars, one of the earliest science-fiction movies, depicted a giant, buglike Martian airship. NASA's favorite ex-Nazi, Wernher von Braun, wrote a book-length outline for a human expedition to Mars, which prominently included air travel on the Red Planet; space artist Chesley Bonestell gave visual life to his ideas in his 1953 painting, Exploring Mars. No wonder, then, that NASA engineers are already mulling ideas about how to "add another dimension to the way we explore worlds in the future."

Actually, it's much more than just ideas. NASA already has another off-world flyer approved and under development — one that is even more audacious than the Ingenuity helicopter. In April of 2026, the agency is scheduled to launch Dragonfly, a nuclear powered octocopter (yes, eight rotors), on an eight-year journey to Saturn's giant haze-shrouded moon, Titan. After touching down on Titan's Shangri-La dune fields, Dragonfly will set off on a daring set of long-distance excursions, essentially carrying out a whole new mission each time it lands.

Dragonfly's capabilities will utterly eclipse those of Ingenuity. Titan has lower gravity than Mars, and its atmosphere is 200 times thicker, making flight far easier there. Also, Dragonfly will carry its own radiothermal energy source, so it won't have to rely on trickles of electricity from a small solar panel. The net result is that NASA expects its Titan 'copter will end up traveling a total of about 175 kilometers over the course of a nearly three-year campaign — and judging from past NASA efforts, those numbers are probably highly conservative underestimates.

Dragonfly as it will appear after landing on Titan in 2034. The 450-kilogram flyer will sample the surface through its feet each time it touches down. (Credit: NASA/JHU-APL)

Titan is a fascinating target for this kind of exploration. It is a huge world, nearly as large as the planet Mercury, covered in cold organic compounds. Methane and ethane fall as rain, flow in rivers, and collect in lakes — a hydrological cycle composed of liquid natural gas instead of water. Titan's dunes are probably composed of tar-like compounds, blowing over a bedrock of deeply frozen water ice. The exotic carbon chemistry happening on Titan today may resemble the reactions that occurred on Earth before life appeared 4 billion years ago. We want to see as much as we can of this unique place.

For now, there are no other flying missions planned for other worlds. But flying is not the only novel form of space transit in development. On small objects like comets and asteroids, hopping is an efficient way to get around. Really, it's almost the only way to get around, since the surface gravity is so low.

The European Space Agency's Philae lander did an accidental hop on Comet 67P after failing to harpoon itself to the surface. The Japanese Space Agency's Hayabusa-2 spacecraft dropped three active hoppers onto the asteroid Ryugu. (I wrote a separate account of their amazing journey.) The Hayabusa-2 probe did its own kiss-and-bounce rendezvous with the asteroid to collect samples. NASA's OSIRIS-REx is about to do a similar maneuver with the asteroid Bennu; Japan's Martain Moons Exploration (MMX) probe will perform yet another kiss-and-bounce on the Martian moon Phobos around 2025.

More sophisticated forms of space-hopping may be coming soon. Phil Metzger at the University of Central Florida is testing a robot called WINE that would visit a comet or asteroid, extract water from its surface, and use it to execute a series of steam-powered jumps. NASA recently funded the development of a similar concept called SPARROW, which could hop across the icy surface of Jupiter's moon Europa.

There could be a future for ballooning on other worlds as well. The Soviets have already pioneered this type of transit with the Vega balloon probe, which was deployed in the upper atmosphere of Venus in 1985. If NASA approves a new Venus explorer — as I fervently hope it will — a new-generation balloon experiment could be floating around the planet in the coming decade.

Any why stop there? I mentioned earlier that Titan has lakes, which would be prime locations for a future space boat or space submarine. NASA seriously considered a proposal for a Titan boat (the TiME mission) but passed it over in favor of the Mars InSight lander. Still, the concept could easily make a comeback. There are also concepts on the drawing board for Titan submarine and a tunneling machine on Europa.

There's even an experiment underway that could make it possible to navigate the oceans of Europa, if that tunneling machine can manage to break through the ice. If you dream of swimming like a fish, this would be the mission for you. Beneath its icy crust, Europa has more water than all of Earth's oceans combined. There may be volcanic vents below, warming and fertilizing the ocean. Many astrobiologists now consider Europa the most likely place to find life elsewhere in the solar system.

Flying on Mars is a breeze compared to traveling to Europa, breaking through 10 kilometers of ice, and exploring the pitch-black ocean below. But if we can master that tremendous challenge... damn, what we find could be well worth the perils of getting there.