With a Rain of Robots, the Asteroid-Exploration Era Has Truly Begun 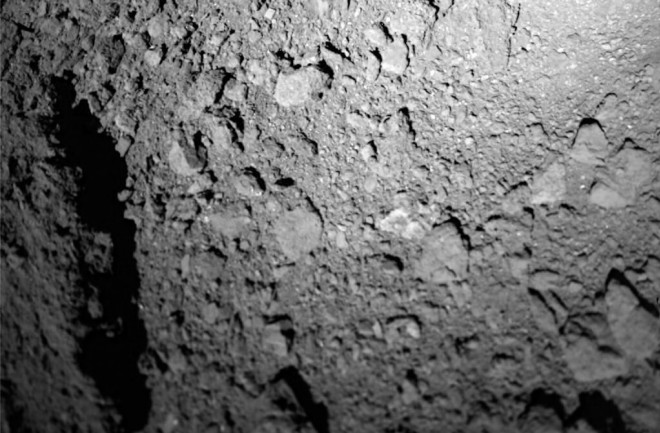 The MASCOT lander captured this shot of asteroid Ryugu from an altitude of 20 meters (60 feet), just before touching down. More images and data will arrive in the next few days. (Credit: MASCOT/DLR/JAXA)

The MASCOT has landed.

As of two weeks ago, humans had never put a single robotic explorer on an asteroid. Now we have three of them hopping about on Ryugu, a 900-meter-wide object currently orbiting on the other side of the Sun. On September 20, Japan’s Hayabusa2 probe dropped two little landers, MINERVA II-1a and II-1b. They promptly sent back dizzying images from the surface. Then last night (October 3), the mothership deployed MASCOT, a much larger rover that is now performing a battery of studies during its rushed, 16-hour lifespan. A fourth rover and sample collection are yet to come.

What we are witnessing here is not just a single spectacular mission (though Hayabusa2 certainly is), but the beginning of a new era of solar system exploration. When the New Horizons probe flew past Pluto in 2015, that marked the end of humanity’s initial reconnaissance of the nine classical planets and the beginning of a closer look at the little-explored small objects that hold so much information about the formation and evolution of the solar system, and perhaps about the emergence of life on Earth.

In 2016, the Rosetta probe made spectacular studies of Comet 67P. Later this year, NASA’s OSIRIS-REx probe will visit another near-Earth asteroid named Bennu; other NASA missions to a double asteroid, a metal asteroid, and asteroids caught in Jupiter’s orbit are all on the way. But for now, the story belongs to Haybusa2 and the spectacular work of the Japan Aerospace Exploration Agency (JAXA). I tracked down a few of the key players to get their firsthand impressions of this historic moment.

The little MINERVA II-1 rovers before launch, and a schematic of their unusual mechanism for hopping around on Ryugu. They are solar powered, so could potentially keep operating for weeks or months to come. (Credit: JAXA)

The little MINERVA II-1 rovers before launch, and a schematic of their unusual mechanism for hopping around on Ryugu. They are solar powered, so could potentially keep operating for weeks or months to come. (Credit: JAXA)

I asked Makoto Yoshikawa, mission manager of Hayabusa2 at JAXA, about his reaction to the first results from Hayabusa2 and its two little MINERVA-II rovers (it stands for MIcro-Nano Experimental Robot Vehicle for the Asteroid, in case you were wondering). These innovative robots, each just 18 centimeters (7 inches) wide, use a movable internal weight to jump about on Ryugu. The gravity there is so weak that wheels or legs would be useless. Yoshikawa also previewed the next stages of the mission, when Hayabusa2 will lower itself to the surface of Ryugu and collect samples to send back to Earth.

Yoshikawa: “For me, the biggest surprise was its shape. The shape of Ryugu is a spinning top, which is totally unexpected. We know some asteroids have such shape, but for such asteroids the spin period is short, just 2 to 4 hours. The spin period of Ryugu is 7.6 hours, so it is not rotating so fast. That’s why we did not expect Ryugu to look like a top. And usually the shapes of small asteroids are irregular. Ryugu is very small but has a geometrical shape, so it is very interesting.

The MINERVA II-1A rover saw its shadow on Ryugu. On an asteroid, the forecast is always sunny weather. (Credit: JAXA)

The MINERVA II-1A rover saw its shadow on Ryugu. On an asteroid, the forecast is always sunny weather. (Credit: JAXA)

“The main purpose of MINERVA-II is not science but to demonstrate how to move on a surface with very low gravity. But now we know how the regolith (rocks, pebbles) look like on the surface of Ryugu. I think this will be important information to study the evolution of Ryugu. The most worrying thing is that there are no wide fields on the asteroid without big boulders. Now we are discussing how to make touchdown safely to get the samples.

“The main scientific purpose of this mission is to study organic matter and waters [hydrated minerals] on the surface of Ryugu. We think Ryugu has not changed much since it was born, so if we study such things, we can understand organic matter in the solar system before life on Earth began.”

Surface views of Ryugu from the MINERVA II rovers. The left 2 images are from rover 1B, the final one from 1A. (Credit: JAXA)

Surface views of Ryugu from the MINERVA II rovers. The left 2 images are from rover 1B, the final one from 1A. (Credit: JAXA)

I also contacted MASCOT project leader Tra-Mi Ho of DLR (the German Aerospace Center), the agency that co-developed the rover with the French space agency. Unlike the MINERVA-II rovers, MASCOT (Mobile Asteroid Surface Scout) is designed for maximum science return. Doing that requires a lot of power, meaning that solar cells would not suffice. Instead, it carries a battery, so this is a one-shot deal: 16 hours of science, give or take, and then MASCOT will spend the rest of eternity — millions of years, at least — slumbering on the surface of Ryugu. Ho summarized what the 10-kilogram lander will be doing during its frenzy.

Ho: “MASCOT has four scientific instruments: MASCAM, a camera; MMEGA, an infrared hyperspectral imager; MARA, a radiometer; and MASMAG, a magnetometer. With this suite of experiments we would like to understand four main goals.

“First, the geological context of the surface. Second, the global magnetization of the asteroid and any local magnetization at the landing. Third, the mineralogical composition and physical properties of the surface and near-surface material including minerals, organics and detection of possible, near-surface ices. And fourth, the surface thermal environment, by measuring the asteroid’s surface temperature over the entire expected temperature range for a full day-night cycle. This all will give us further understanding on what C-type [carbon-rich] asteroids Ryugu are made of and learn about their evolutionary history.

MASCOT on Earth (top), and as it might appear now on Ryugu. (Credit: DLR)

MASCOT on Earth (top), and as it might appear now on Ryugu. (Credit: DLR)

“The finding of the MINERVAs and MASCOT are very complementary. The MINERVA rovers landed on the northern latitude of Ryugu. MASCOT will land on the southern latitude of Ryugu. By correlating the observation of the instruments on-board Hayabusa2 with the in-situ measurements performed by MASCOT and the MINERVAs, along with the analysis of the retrieved samples which we foresee will be taken along the asteroid’s equatorial region, the acquired local ground truth on Ryugu can be placed into a global context.

“When I saw the first images from the MINERVAs, I was surprised and astonished at the view of such an extraterrestrial world. It is quite different from asteroid Itokawa, which was visited by Hayabusa. It looks like smoother terrains found on Itokawa are less widespread on Ryugu. The amount of stones and fractured boulders appear more hazardous, so it’s possible that MASCOT could get trapped in an unfavorable condition. It adds excitement to the adventure, though!”

Amid all the excitement over Hayabusa2 and its little companions, I also want to give props to one of the mission’s predecessors. This is the first time anyone has successfully deployed rovers on an asteroid, but this is not the first time anyone has landed on an asteroid. (And, to be fair, there have also been quite a number of comet and asteroid flybys.) The first-touchdown honor goes to NASA’s NEAR Shoemaker spacecraft in 2001. Although NEAR was designed only to orbit the asteroid Eros, mission planners devised a clever plan to crash land it so gently that it might survive. In fact, NEAR kept operating for more than two weeks, returning bonus data about the composition of Eros.

The first intimate portrait of an asteroid, and also the last image taken by NEAR Shoemaker, from 2001. At the time the spacecraft was 120 meters from Eros and falling. (Credit: NASA/JPL/JHUAPL)

The first intimate portrait of an asteroid, and also the last image taken by NEAR Shoemaker, from 2001. At the time the spacecraft was 120 meters from Eros and falling. (Credit: NASA/JPL/JHUAPL)

Lucy McFadden of NASA’s Goddard Space Flight Center was on the NEAR science team. She’s also a veteran of several other small-body missions, including the Dawn mission that is now nearing its end around dwarf planet Ceres. McFadden has some colorful recollections from her time with the NEAR mission.

McFadden: “The NEAR landing on Eros was extremely elegant, as it was not designed to do so.  The engineers made it happen, and it provided us with serendipitous results. Now my colleagues will be able to compare two asteroids that vary in size by a factor of 20. Hyabusa2 will provide a lot more information, because it planned on landing and its lander has instruments designed to operate on the surface. We have the bold engineers and mission managers to thank for paving the way for today’s landed space missions.

“After the NEAR landing, we took one of our lead engineers out to dinner (to celebrate his getting a PhD–not for the landing).  While at the restaurant, we heard a big uproar at the bar. We asked the waitress what the huzzah was all about.  She said, ‘One of the guys had just landed his ping pong ball in a glass of beer at the end of the bar.’  We all looked at each other, and turned to the waitress and said, ‘Oh, that’s nothing. We just landed a 3-meter spacecraft on a 33-kilometer-long asteroid, 135 million kilometers away.’ We were all tremendously amused at ourselves.”

McFadden reflects that then, as now, the triumphs of space exploration provide a welcome counterpoint to the sad and maddening stories that dominate the news headlines. “At times like these, space stories play an important role,” she says. “I call it cosmic relief.”

Just wait, because the Hayabusa2 mission has a lot more cosmic relief coming our way.