Hot Metals Swirl Around White Dwarf in an Ultra-Hot Discovery 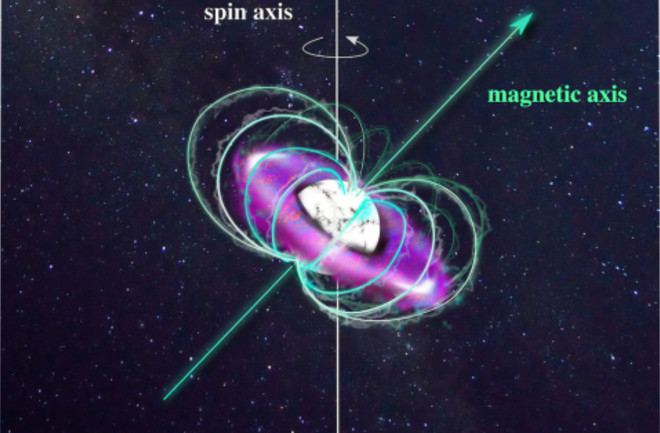 Some 1,200 light-years from Earth, an international team of astronomers has discovered an ultra-hot magnetosphere, or magnetic field, surrounding a sun-like star.

“White dwarfs are the remnants of about 95 percent of all stars, so pretty much every star in our universe will end up as a white dwarf at the end of its life,” study leader Nicole Reindl, a researcher at the University of Leicester, said in an email.

Ultra-hot magnetospheres have been discovered before around massive stars that are relatively young. But this is the first time such a magnetosphere has been spotted around a white dwarf. “It is a complete surprise,” Reindl said.

Typically, around this time in the star’s life, a white dwarf ejects its outer atmospheres, leaving behind a slowly-cooling, hot, dense core. The surface of such stars is usually around 180,032 degrees Fahrenheit (100,000 degrees Celsius). But scientists have found evidence of highly ionized metals, or heavy elements with only one electron in their outer shell, in white dwarf stars. Creating such metals would require temperatures of 1,800,032 degrees Fahrenheit (1 million degrees Celsius), which is must hotter than what is expected for these stars.

This research team used the Calar Alto telescope in Spain and a spectrometer, which can reveal what the star is made of by the light it emits, to observe this particular white dwarf 1,200 light-years away. And, in this star, they found signatures of highly ionized metals. Additionally, they found that the metals observed actually changed over six hours, which is also the time it takes for the star to rotate.

The team found that the star’s magnetosphere traps material coming from its surface and shocks in the magnetosphere heat the material to an extreme temperature to about 1,800,032 degrees Fahrenheit (1 million degrees Celsius). Further, this extreme temperature would strip away almost all electrons from the metal atoms — which would explain why they are highly ionized.

This discovery could change how scientists study and model white dwarfs, and support future astronomical research.

“This discovery provides further evidence that a large fraction of white dwarfs harbor magnetic fields,” Reindl said. “However, so far we have been neglecting the magnetic fields when modeling white dwarfs. This could mean measurements of other basic properties of white dwarfs are wrong, like their temperatures and masses. Since white dwarfs are utilized as powerful tools for other astronomical purposes (like to derive the age of our Galaxy or to put constraints on the nature of dark matter), it is highly desirable to understand the impact of magnetic fields more in detail.”

The research was published Nov. 7 in the journal Monthly Notices of the Royal Astronomical Society.