'Hot Jupiter' Exoplanets May Be Born Uncomfortably Close to Their Stars 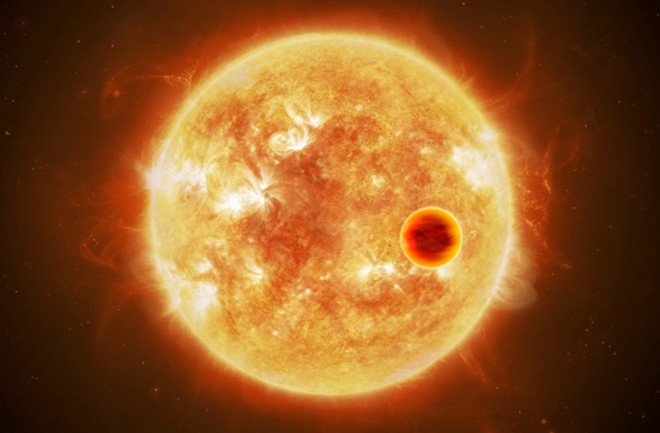 Hot Jupiters are massive gas giant planets circling their suns at a fraction of the Earth-Sun distance in our own solar system.(Credit: ESA/ATG medialab, CC BY-SA 3.0 IGO)

Today, astronomers have numerous extrasolar systems to study, but most look very different from our own. Determining how these solar systems — and ours — formed is challenging. New research presented at the 233rd Meeting of the American Astronomical Society in Seattle, Washington, on January 8 lends credence to an idea that goes against previous thoughts about planet formation, but has been gaining traction in the field: Giant planets that orbit their stars in a matter of days may have formed in place close to their suns, rather than moving inward from much farther away.

The work, published October 5 in The Astrophysical Journal Letters by Elizabeth Bailey and Konstantin Batygin of Caltech, shows that such giant planets — called hot Jupiters — can form in situ, or in place close to their stars, and remain there over their lifetimes without evaporating away. Hot Jupiters are giant planets that orbit very close to their host star, typically less than one-tenth the distance between Earth and the Sun. They are found in about 1 percent of systems. Since their initial discovery in the 1990s, astronomers have wondered how these strange planets got to where they are today. “In the solar system, there’s really nothing orbiting interior to Mercury — not even a belt of asteroids. So for there to be giant planets not only well within the snow lines of their stars, but also well within the orbital distance of Mercury, presented a major challenge to the existing understanding of planet formation,” Bailey said in a press conference.

Birth of a giant

To make a hot Jupiter, first you must form a gas giant. Astronomers believe this happens through a process called core accretion. A rocky core — Earth-sized or larger — forms in the protoplanetary disk. Once this core reaches a critical mass, about 10 Earth masses or more, it undergoes a phase of extremely rapid accretion, pulling in hydrogen and helium into an atmosphere and eventually gaining enough gas to become a gas giant.

According to traditional planetary formation theories, gas giant planets form out where our Jupiter and Saturn sit, at several times the Earth-Sun distance, where there is enough cool material available for them to grow so massive. To get a hot Jupiter under these conditions, giant planets must migrate inward. Indeed, our solar system shows evidence of planetary migration, and one of the leading theories of its formation, the Grand Tack model, suggests that Jupiter and Saturn formed far from the Sun, migrated inward, then moved back out to their current locations.

But is that the case for all solar systems? And does inward migration really explain the hot Jupiters?

In their work, Bailey and Batygin plotted extrasolar planet mass as a function of each planet’s distance from its host star. In doing so, they were able to look at trends that might clue them in on hot Jupiter formation, based on where those planets are found.

“[The] inner boundary of the hot Jupiters is actually pretty sharp looking,” Bailey explained of the data. In other words, hot Jupiters are only found up to certain radii around their stars, with no outliers inside of that boundary. “Generally, when it comes to planets or asteroids, when things scatter from their original formation location, it tends to create a scattered appearance of their distribution. So that seemed like a clue that this sharp inner boundary of the hot Jupiter distribution might actually be a signature of their formation close to their stars,” she said.

The pair then calculated the smallest radius within a protoplanetary disk where the runaway accretion leading to a Jupiter-mass planet could occur. They found that radius is quite close to the star — it essentially lies at the inner edge of the hole a star’s magnetosphere carves out in the center of its disk. This means that core accretion and giant planet formation can occur all the way in to innermost part of the disk, birthing hot Jupiters in place at the distances we see them today.

“Taking these assumptions into account, we predicted an expression for the inner boundary of the hot Jupiter population, which actually agrees quite well with the observations,” Bailey said.

The last piece of the puzzle, then, is where do the cores for these hot Jupiters come from? And that’s simple — they are, Bailey and Batygin say, the super-Earths (planets of about 1 to 10 Earth masses) common in other solar systems, but also pointedly lacking in our own. In their paper’s conclusion, Bailey and Batygin point out that “all that is needed to reproduce the vast majority of the hot Jupiter population in situ is for [about] 1 percent of young super-Earths to enter the runaway regime of conglomeration before dissipation of their protoplanetary nebulae.”

They do note that their study is “agnostic” as to where these super-Earths come from — as in, they didn’t look at how or where they form, simply assume that they’re there in the first place to serve as cores for future gas giants. But because only 1 percent of Sun-like stars have hot Jupiters, they wrote, only 1 percent of super-Earths need to undergo accretion and become hot Jupiters to create the planetary systems we see today.

And just in case you were worried about how orbiting so closely to its star affects a hot Jupiter’s chances of survival, the answer is: It doesn’t. Though some less massive planets have been found with their atmospheres boiling away, hot Jupiters are so massive that over the course of their stars’ lifetimes, only about 1 percent of their atmospheres will ultimately be lost to photoevaporation, Bailey said.

So not only can these planets form essentially in place, they can stay in place throughout their lifetimes as hot, massive worlds living in solar systems completely unlike our own.