Hot Answer to a Solar Mystery

Compared to the surface, the sun's atmosphere is blazing hot. So what's heating it? 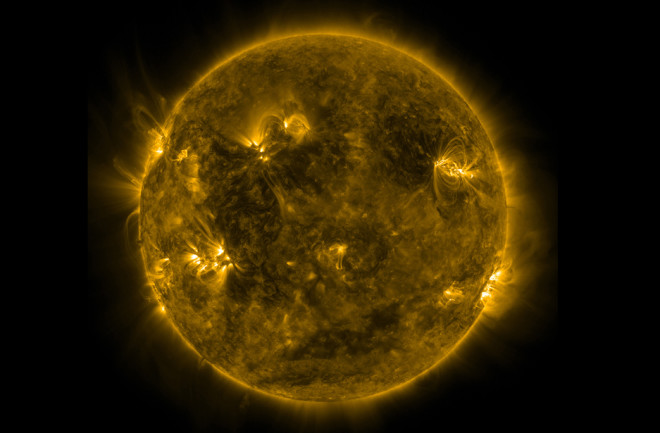 The sun’s atmosphere is even hotter than its surface, possibly due to “nanoflares” confirmed by astronomers this year. | Courtesy of NASA/SDO and the AIA, EVE and HMI science teams

The sun’s surface is hot, sure — almost 10,000 degrees Fahrenheit — but the solar atmosphere, or corona, is somehow 4 million degrees. What gives? In April, scientists announced the main reason: small bursts of magnetic energy called nanoflares, which temporarily heat pockets of gas to 20 million degrees.

“The sun’s surface is much like a pot of hot oil on the stove,” says NASA solar scientist James Klimchuk. “Hot oil rises, spreads out horizontally, cools and falls back down to the bottom of the pot, only to rise again.” That constant movement can twist and tangle the magnetic fields that thread through the sun and extend into the corona. Eventually, like a rubber band, they reach a point where they snap. Scientists had theorized this would cause a nanoflare.

“[These observations] confirm that nanoflares exist and heat at least some of the corona,” says Klimchuk. Next up is confirming nanoflares’ magnetic births and determining how often they occur.