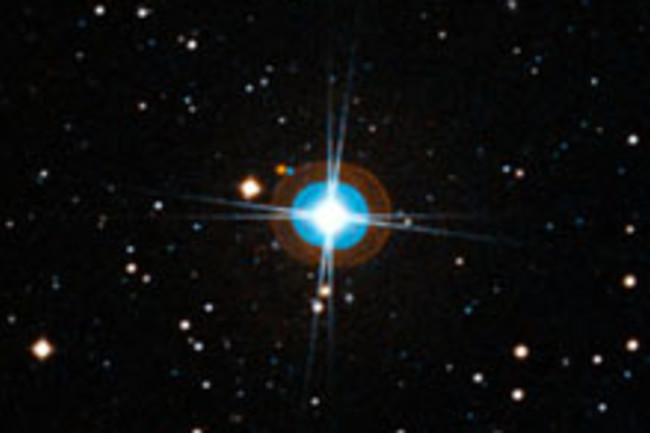 In August 2006, Pluto received its official demotion to dwarf planet status, taking our solar system down to eight planets. In August 2010, exoplanet hunters say they've found a haul of new worlds around a single star; that alien solar system may have seven known planets, meaning the system could be more like our home system than any ever discovered. And one of those worlds could be the smallest exoplanet ever found, too. The star these planets orbit is called HD 10180, and it lies 127 light years from here. Astronomers at the European Southern Observatory in Chile used a spectrograph called HARPS to track tiny variations in the starlight caused by the pull of the planets.

It found clear evidence for five giant planets similar in size to Uranus or Neptune in our own solar system. But there were also tantalising signs that two other planets are also present, one of which would be the smallest, or least-massive, yet found orbiting another star [Christian Science Monitor].

While those gas planets would be at least 13 times the size of the Earth, the small world—if it's truly there—would contain less than one and a half Earth masses. But as astronomers have seen with many of the small exoplanets they've found, Earth-size doesn't mean Earth-like when it comes to temperature, chemical composition, or anything else. The HARPS data suggests this roughly Earth-size planet is scaldingly close to the star: Its year is just more than one of our days. And, as we saw last month when one of the scientists behind the planet-hunting Kepler mission got everyone excited over Earth-size planet "candidates

," it can take a long time to confirm the finding of smaller, rocky worlds. Astronomer Alan Boss agreed:

Boss noted that the method was "biased toward finding the big guys" because the greater the planet, the greater its gravity and the more it made its parent star wobble. But he said the discovery showed that finding smaller planets was still possible. "This field has gone from zero to close to 500 planets in just 15 years," he said. "Fifteen years ago we did not know about the big guys. Earth-like planets are going to be quite commonplace" [AP].

Whether this star system has five or seven planets, it shows that astronomers are creeping closer to finding systems that look like ours. National Geographic reports

that just 15 known systems have three planets or more, but that number might soon shoot upward. Next year the Kepler

scientists are supposed to release their full data set from the telescope's first batch of findings, including the Earth-sized candidates they've been holding back. And, on a more basic level, every year since the first exoplanet discovery, astronomers have spotted more of them than the year before. As the planet count rises, we'll probably see solar systems that resemble home on more sophisticated levels. HD 10180 might have about the same number of planets as our sun, but the system itself is markedly different: Those Neptune-sized gas planets orbit much closer than Neptune, and there doesn't appear to be a Jupiter-sized giant in the group. The gravitational influence of a huge gas giant can especially influence the prospects for life:

Studies have shown that Jupiter, with its gassy enormity, has been acting as a sort of shield for Earth, gravitationally deflecting asteroids and comets that hold the potential to trigger mass extinctions [National Geographic].

So there's no place quite like home... yet. Related Content: 80beats: Kepler's Early Results Suggest Earth-Like Planets Are a Dime a Dozen