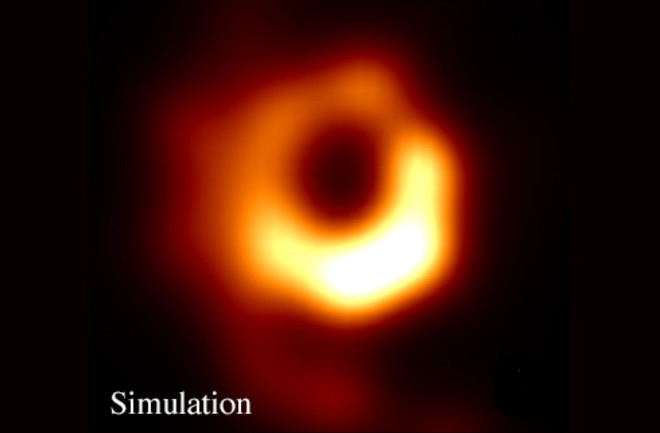 A simulation of what the Event Horizon Telescope might find. (Credit: Andrew Chael)

[Update 4/10/19: The first image of a black hole was announced today. Check out the real picture here.]

Humanity may soon get its first-ever picture of a black hole. Scientists with the Event Horizon Telescope (EHT) announced this week that they'll be holding a press conference Wednesday, April 10, and they're expected to reveal the results of their years-long quest to catch a black hole on camera.

What that picture will look like is still unknown. But scientists think they have a pretty good idea of what a black hole should look like. For years, astronomers have been running simulations of black holes based on the laws of physics and a few basic assumptions about what goes on near a singularity.

The resulting images offer a preview of what we might expect to see next week when the real thing gets unveiled. An Interstellar-quality black hole, these are not. But, they're also some of the most realistic depictions of black holes we have right now.

Two simulations of M87, the image on the right is closer to what we might actually see. (Credit: Andrew Chael)

This first image was produced by Andrew Chael, an astrophysicist at Harvard University involved with the EHT. He used data that simulates what scientists think the telescope will collect to create the above simulation of M87, one of the black holes the EHT is looking at.

Simulated images of Sagittarius A*. The leftmost image is a pure simulation, while the next three depict how scattering might influence the image. (Credit: Fish et al./Astrophysical Journal)

This series of images shows a depiction of Sagittarius A* (pronounced A-star), the supermassive black hole at the center of our own galaxy. The first is based on a simulation, and the next three incorporate some of the signal scattering that will no doubt happen as the light travels across the galaxy to reach us. Using a series of filters, scientists are attempting to reduce the scattering as much as possible. The final two images include some of those filters.

Anatomy of a Singularity

The bright ring visible in all of these images is the black hole's accretion disk, where gas being sucked toward the center gets heated until it begins to glow.

The disk appears brighter on one side because of the Doppler effect. Light moving toward us seems to go faster from our point of view, while light moving away from us goes slower. So, if we're looking at an accretion disk edge-on that's moving from left to right, the light will appear brighter on the left and dimmer on the right.

The dark region in the middle of these images is the black hole itself — a region of space where gravity is so intense that light cannot escape, rendering it pitch black.

The most realistic of these images are also the least exciting, simply because they take into account the fact that the black holes the EHT is trying to image are so far away. Sagittarius A* is 26,000 light-years away, while the much larger supermassive black hole in M87 is about 55 million light-years away.

At those distances, the two objects look almost impossibly tiny. Put an apple on the moon, go back to Earth and look at it — that's about how much of the sky the two black holes they're trying to image each take up. The EHT compensates by using a network of observatories around the world working in concert, creating a camera that's effectively the size of our planet.

But, even so, the EHT is just barely big enough to get a picture of these two black holes. Simulations based on realistic data from the EHT yield smudged halos of light — hardly the stuff of science fiction. That's just the reality when taking pictures of things so far away, of course.

For scientists, the true power of the image will be that it exists at all. Keep in mind, we've never actually seen a black hole. Up until recently, and despite their prevalence in science fiction and scientific journals, black holes have been theoretical.

LIGO, the Laser Interferometer Gravitational-Wave Observatory, has already used gravitational waves to detect colliding black holes. But that's not the same as seeing one with our own eyes. When the EHT's image does finally come in, astronomers will be able to finally compare their simulations with reality, and the resulting data will offer invaluable insights as to how the laws of physics behave in the extreme gravitational environment of a singularity.

The simulations themselves will also play an important role in obtaining this final image, as well. Because scientists are unable to cover the entire planet in observatories, there are gaps in the data that the EHT collected. This means that the results they do get could be interpreted in a number of different ways, depending on what scientists think sits in the gaps of their data.

Using simulations to guide them, the researchers will be able to make the most informed guesses they can to give us a picture of the previously invisible.