Everything Worth Knowing About ... Black Holes 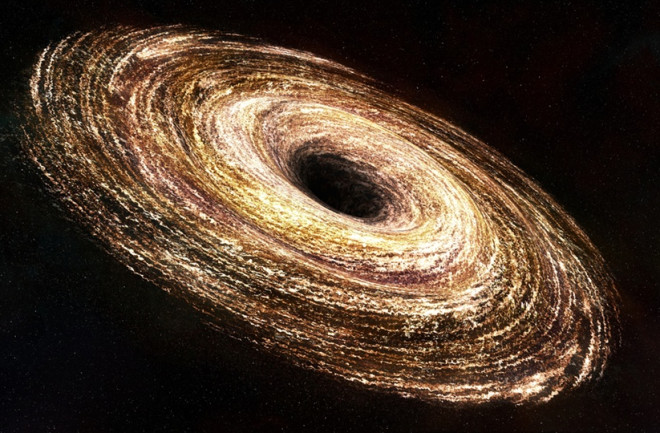 Nothing is stranger than a black hole. The darkened corpse of a former sun from which not even light can escape, a black hole forms when a massive, dying star crumples under its own gravity. It shrinks until all of its mass is contained in an infinitely dense point, called a singularity. Its gravity is so intense, if anything ventures within an invisible border around the singularity, called the event horizon, it cannot escape.

Just outside the event horizon whirls high-temperature material — the accretion disk — waiting to “fall into” the black hole like water spiraling down a drain. The disk emits X-rays, a high-energy form of light, because the matter moves so fast that its friction generates a lot of heat. Jets of energy and matter, whose formations remain a mystery, can stretch away from the accretion disk for hundreds of thousands of light-years.

For more on black holes check out our free e-book on the universe's most mysterious objects.

Nudging up against the event horizon, a ring of photons surrounds the black hole. This loop of light, called the innermost stable circular orbit, outlines the edge of the black hole like a bull’s-eye. And from its dead center, the black hole evaporates energy called Hawking radiation, causing the whole thing to shrink ever so slightly and slowly. Billions or trillions of years after its birth, the black hole will evaporate entirely.

At first, you float carefree through space-time, gradually approaching a black hole. The gravitational tug on your feet isn’t much different from that on your head.

As you drift closer, the black hole’s gravity becomes bothersome. Because your shoes are 5 or 6 feet closer, they feel more of its pull first.

The black hole soon pulls your feet much harder than the rest of you. They begin to stretch away from your calves.

That uncomfortable feeling grows as you’re strung out into a thin strand, or spaghettified. Game over, man.

Who Will Solve the Information Paradox?

When an object crosses the event horizon into a black hole, it can never come back out — it, and all information about its identity, are trapped forever. But black holes slowly evaporate as they leak Hawking radiation into space. So when they disappear, what becomes of the information trapped inside? Quantum mechanics says such information can never be destroyed. Here’s how four different physicists have tried to resolve this so-called information paradox.

Leonard Susskind, Information Station Institution: Stanford University Year: 2008 Known for: Co-creating string theory Idea: In his book The Black Hole War, Susskind says quantum physics dictates that information remains on the black hole’s edge, even while the object falls in. Stephen Hawking fought him, saying the information is gone forever, so quantum mechanics must be flawed.

Joseph Polchinski, Firewall Institution: University of California, Santa Barbara Year: 2012 Known for: Discovering D-branes, explaining what D-branes are (a string theory thing) Idea: Once a black hole has lost about half of itself to Hawking radiation, the event horizon can no longer store enough encoded information to tell the story of what’s inside. After that, nothing can go inside or else its information will be lost, and the singularity essentially collides with the event horizon. A “firewall” — a wall of energetic particles born from collision — then lies just outside the horizon, incinerating anything that tries to cross it.

Gerard ’t Hooft, Hidden Code Institution: Utrecht University Year: 2015 Known for: Winning the Nobel Prize in Physics in 1999 Idea: ’t Hooft elaborated on Susskind’s idea. As the object approaches the black hole’s edge, the latter’s gravitational field changes. That shifts the outgoing Hawking radiation in a way that encodes information about the object.

Stephen Hawking, Holograms Institution: Cambridge University Year: 2015 Known for: Inventing Hawking radiation, being Stephen Hawking Idea: After contending for years that information is destroyed, the famous physicist changed his tune. Last year, he said a 3-D object leaves a 2-D stamp — a hologram — on the event horizon as it goes in. As Hawking radiation travels out, an impression of the object’s identity is stamped on the hologram.

How to See a Black Hole

Just as planets orbit the sun, stars orbit our galaxy’s central black hole, Sagittarius A* (pronounced “A star”). Scientists at the University of California, Los Angeles, have watched their maypole dance for more than 20 years.

Sagittarius A* recently tried to shred a mysterious object. In 2011, astronomers discovered G2, which they thought was a gas cloud, on a near-collision course with the galactic center. They believed the black hole would rip G2 apart before eating it. G2 did spaghettify a bit, but it held together and continued on its path. Scientists now believe the gas cloaks a secret star, whose gravity kept the clouds safe from total annihilation.

Not all stars are so lucky. In October 2015, astronomers watched as a supermassive black hole in the galaxy PGC 043234 — 290 million light-years away — shredded a star, scooped it into the accretion disk and then ate it for space lunch.

While we have solid evidence that black holes exist, many of the details remain fuzzy, leaving open strange doors of possibility. On the speculative end of the spectrum sits the weird world of wormholes and white holes.

Wormholes, also called Einstein-Rosen Bridges, are shortcuts between two places in space. In this scenario, after you enter a black hole, you (or your spaghettified remains) enter a “tunnel” and come out many light-years away through a white hole, the opposite of a black hole. While a black hole is like the Hotel California — you can check in, but you can never leave — you can leave a white hole, but never check back in. They’re mathematically possible, but no one has ever found evidence of a worm- or white hole. Then again, their discoverer could never return to tell us about it.

Black Holes on the Big Screen

A scene from the movie "Event Horizon". Paramount/Courtesy Everett Collection

CLOSE: Physicist Kip Thorne worked with the producers of Interstellar to make the most scientifically accurate black-hole visualization ever. The characters got fancifully close without being spaghettified, though.

NOT AT ALL: In the 1997 film Event Horizon, a spaceship of the same name tries to travel throughout the universe by creating black holes. Instead, it slips into a “dimension of pure chaos,” causing the crew to mutilate each other. There is, to date, no evidence that black holes lead to dimensions of pure chaos.

[This article originally appeared in print as "Black Holes"]