Sunlight, or even the lightbulbs in your supermarket, can create aromas of cabbage or wet dog in your wine. 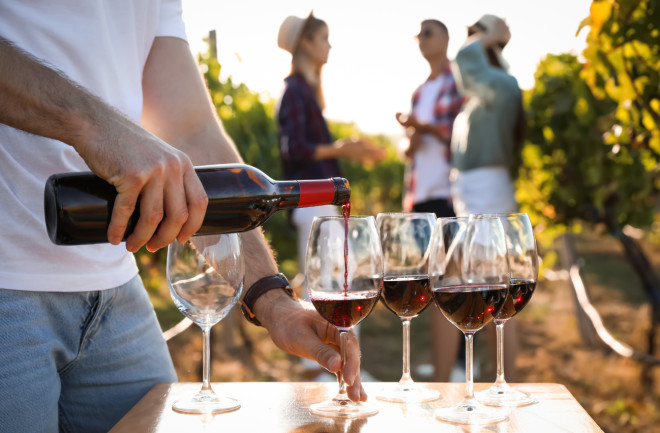 Lightstrike may be ruining your wine before you even open the bottle. “The light is transforming some primary aromas into something normally not present in wine,” says Fulvio Mattivi, a wine chemist at the University of Trento in Italy.

He’s been looking into the lightstrike problem — which occurs when wine bottles are exposed to too much direct sunlight or artificial light — for several years now. These sources of light can cause chemical reactions in certain compounds, he says, which ultimately change the flavor of your favorite vino. At least 70 to 75 percent of all wine can be affected by this problem.

“It’s not something easily manageable by the wineries,” Mattivi says.

When your pinot gris or chardonnay is exposed to intense light, these chemical changes can result in a dulling of the pleasant flavors that wine drinkers most enjoy. In the worst-case scenario, it can even result in the off-putting aromas of boiled cabbage, corn nuts or wet dog — not exactly something that might pair well with a gourmet meal.

In a study published recently in the Proceedings of the National Academy of Sciences, Mattivi and his colleagues at the Edmund Mach Foundation describe the mechanism for this change in flavor.

Of course, lightstrike doesn’t affect all wines equally. White wine is most affected because the clear liquid is penetrated by light more easily. A rosé can also be affected, while reds are usually relatively protected. Wine bottles also play a big role; earlier work by Mattivi and his colleagues showed that wine stored in green bottles is a little more resistant to lightstrike than that stored in clear flint bottles, for example. Wine stored in more opaque, brown bottles is even less vulnerable.

To find out what’s happening inside the bottle when too much light gets in, Mattivi’s team used techniques that separate the chemical components of a mixture then determine their relative quantity. They selected two dozen types of wine, including pinot gris, chardonnay, Müller-Thurgau and gewürztraminer, and exposed the beverages (1,052 bottles in total) to a light — tailed to mimic what the bottles might experience on a supermarket shelf.

Terpenes are typically responsible for a pleasant floral fragrance. In gewürztraminers, for example, they often bring about a rose-like or lychee aroma, Mattivi says. Norisoprenoids, on the other hand, are an important group of aromas that typically increase with aging — assuming the wine doesn’t suffer from lightstrike, of course. Some norisoprenoids can bring about aromas of baked apple or dry plum, although they may also positively interact with other fruity compounds in the liquid.

The team also found that light increased the levels of 4-hepten-1-ol, a compound that can smell like rancid oil, in chardonnay and pinot gris wines stored for a week in clear flint glass bottles in supermarket lighting.

“In the end you are not sure anymore if that is a chardonnay or if it is something else,” Mattivi says. In the study, the authors write that the decrease in these components result in a lesser “aromatic bouquet” that is “naked of metabolites that could mask possible off-flavors.” These decreases could cause big problems for neutral or low-aromatic white wines in a relatively short period of time.

For Mattivi and his team, the findings reveal the underlying issues with using clear flint glass bottles for any type of wine — although don’t let this stop you from purchasing one yourself. Many people might still enjoy their wine without noticing these problems. Gewurztraminers, for example, are so strongly aromatic that despite the loss of some pleasant compounds and the increase of negative aromas, the wine may not suffer too much.

Read More: Natural Wine and the Debate Over 'Healthy' Alcohol

Keeping the bottles out of the light at all times is nearly impossible for wineries, as there are so many potential exposure points in the distribution between the wine’s bottling and its consumption. If doesn’t happen on the supermarket shelf or while on display at a restaurant, wine bottles could also experience lightstrike during shipment or in your kitchen at home, for example.

“Very expensive bottles often remain on the shelf for a long time, and therefore are usually sold in dark green or amber bottle,” Mattivi explains.

As a result, he calls clear flint bottles “stupid packaging” — a problem compounded by the fact that this type of glass isn’t even cheaper than darker bottles, necessarily. “I would prefer to have a package that preserves the integrity,” he says, adding that he hopes his latest research will provide more information to consumers looking to buy wine, a supposedly non-perishable product.