The Cassini spacecraft recently passed very near the tiny moon Helene and returned amazing pictures of it. 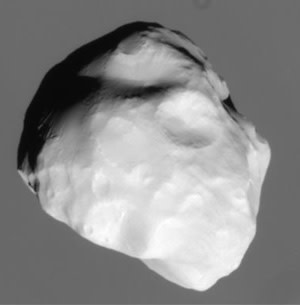 Helene is a dinky iceball, only about 36x32x30 km (22x19x18 miles) in size (this picture has an incredible resolution of about 113 meters (123 yards) per pixel). It circles Saturn in the same orbit as the much larger Dione, and is in fact in the larger moon's leading Trojan point: a peculiar artifact of gravity when an object orbits another. It's a gravitational stable point, like a valley between two mountains. Clearly battered, Helene has an oddly smooth appearance, which may be due to the feeble gravity of the moon collecting dust also trapped in the Trojan point. At The Planetary Society Blog, Emily has more info on Helene and speculates about its appearance. She also has a good description of how the Trojan points work. Credit: NASA/JPL/Space Science Institute