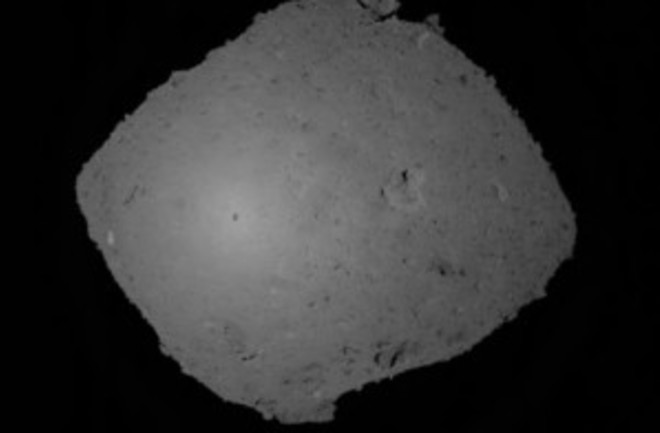 Hayabusa2's view of Ryugu as the craft descended towards the asteroid October 15, 2018 in the first of two touchdown rehearsals. (Credit: JAXA)

This past summer, Hayabusa2 — a spacecraft, operated by the Japanese Space Agency JAXA, sent to collect and return asteroid samples — arrived at asteroid Ryugu. Today, the craft comes close to the asteroid in the first of two touchdown rehearsals.

After this close brush, the spacecraft will retreat. This is the first of two touchdown rehearsals before “conjunction” — “when Ryugu is behind the Sun as seen from Earth,” Jonathan McDowell, an astronomer at the Harvard-Smithsonian Center for Astrophysics who tracks exciting activity in space, tweeted. During conjunction, it will be very difficult for the craft to communicate with Earth, so activity will slow down from November until January, McDowell added.

Minutes after this photo was taken, Hayabusa2 reached its targeted lowest altitude, and “applause erupted in the control room!” the official account tweeted.

Hayabusa2 is JAXA’s second sample mission. Over the course of its mission, the spacecraft, which launched in 2014, will deploy a small lander and three rovers onto asteroid Ryugu — so far the craft has deployed three rovers to probe the asteroid. The craft will also blast a small crater into Ryugu so it can analyze the materialsbeneath the asteroid’s surface. After Hayabusa2 has thoroughly studied asteroid Ryugu, it will return to Earth with a number of precious samples on board.

Studying asteroids like Ryugu can give scientists an intimate look at our early solar system. Objects like asteroids have remained relatively unchanged since they formed in the earlier days of the solar system, and those less-changed or unchanged components that an asteroid has retained could clue scientists into how such an object formed, and what may have been happening in the solar system at that point in time.