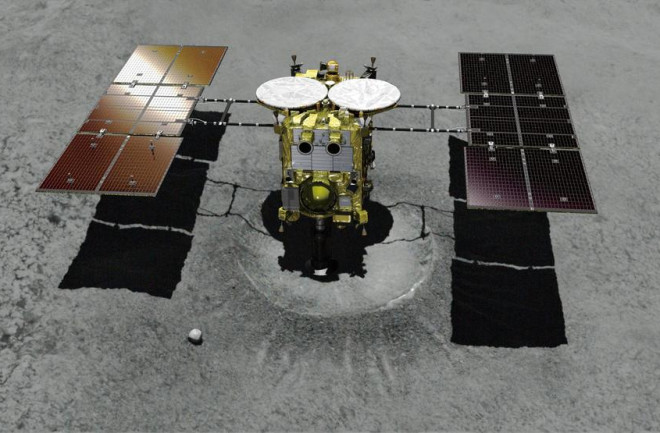 The Japanese spacecraft Hayabusa2 is hard at work collecting data on asteroid Ryugu. (Credit: JAXA) The Japanese Space Agency's (JAXA) Hayabusa2 spacecraft swooped down and collected a first sample from the asteroid Ryugu on February 22. And now JAXA is ready to make an even more dramatic sample collection in April when it uses explosives to shoot an impactor at the space rock to create an artificial crater. Hayabusa2 won’t leave Ryugu until the end of 2019, and it's expected to make it home to Earth with the samples at the end of 2020. In the meantime, scientists are learning plenty from Hayabusa2’s other explorations, which have already started to yield results, mission scientists announced Tuesday. That includes new evidence that Ryugu’s was once part of a much larger asteroid.

Are You My Mother?

Hayabusa2's cameras and instruments are constantly sending back information about Ryugu. Scientists knew before arriving that it was a stony, carbonaceous chondrite asteroid. But orbiting closely around Ryugu has taught them much more. For one, Ryugu is much more rugged than scientists expected. And that pushed back their first touchdown maneuver. Instead of collecting their first sample in October, they stayed in orbit, trying to find a spot to touch down that was free of large boulders that might harm the spacecraft. While scientists eventually found a spot, the landing area was much smaller than they’d originally hoped, meaning they had to be much more careful about touchdown. The February collection went smoothly, and the team is now confident in their ability to navigate around Ryugu. Scientists also found that Ryugu is darker than most asteroids of its type, reflecting less than 2% of the sunlight it receives. When they compare it to meteorite samples in labs, scientists found it looks like materials that have undergone “thermal metamorphosis” – in other words, they’ve been changed by exposure to heat. Seconding this theory, Ryugu also shows signs of being covered in hydroxyl, a material made up of hydrogen and oxygen. Seeing this is a good indication that Ryugu once contained water that has since been baked away, leaving behind only some of the components. Seiji Sugita, spoke at a press conference today at the 50^th Lunar and Planetary Science Conference in Houston, providing updates to the Hayabusa2 mission. He said all the evidence points to Ryugu being a fragment of a larger, older asteroid parent body. The complex history of its surface doesn’t make sense for a body as small as it is. And the size itself points toward its origin – Sugita says it could not have survived 4.6 billion years of solar system history on its own. In short, Ryugu’s parent would have had water on it, which was later baked away. Then, some impact broke off fragments and sent Ryugu off on its own, sometime in the last few hundred million years. He says that when the samples Hayabusa2 collected are returned to Earth, they may be able to date that collision and point to a specific parent asteroid body. More of his results are published today in the journal Science. Hayabusa2’s next big maneuver will be delivering an impactor to Ryugu’s surface on April 5. Instead of the small bullet it used to collect its first sample, this will be a 4.5-pound impactor that the spacecraft will send crashing into Ryugu’s surface to stir up material from well underneath the surface. The spacecraft will descend about two weeks later into what researchers expect will be a 30-foot crater in order to investigate and collect more samples that will tell researchers about the asteroid’s still-mysterious interior.