Have Physicists Found Echoes From Before the Big Bang? 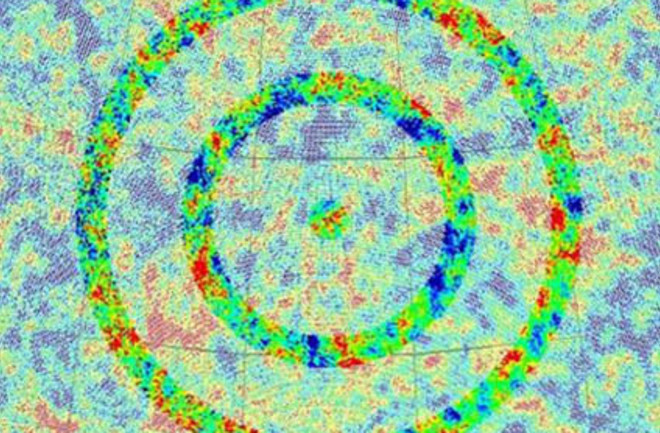 The Big Bang was not the beginning, Roger Penrose believes. The eminent Oxford physicist has long advocated the wild idea of "conformal cyclic cosmology," a cyclical universe without beginning or end in which the Big Bang 13.75 billion years ago was simply one of many. This month, Penrose pushed his idea further: His team says it has detected a pattern in the cosmic microwave background—radiation left over from just after the Big Bang—that represents the echo of events that occurred before the Big Bang itself. Penrose examined the data from the Wilkinson Microwave Anisotropy Probe (WMAP), the mission that just completed nine years of surveying the cosmic microwave background across the sky. His study points to concentric circular patterns in the WMAP data where he says he found something surprising:

The circular features are regions where tiny temperature variations in the otherwise uniform microwave background are smaller than average. Those features, Penrose said, cannot be explained by the highly successful inflation theory, which posits that the infant cosmos underwent an enormous growth spurt, ballooning from something on the scale of an atom to the size of a grapefruit during the universe’s first tiny fraction of a second. Inflation would either erase such patterns or could not easily generate them. [Science News]

By Penrose's thinking, those circles are the calling cards of something big that happened in the universe before our Big Bang

and reverberated after it. Like the birth and death of previous universes.

From calculations made by Penrose, he believes that as each universe evolved, the catastrophic collisions between supermassive black holes (the black hole behemoths living in the centers of galaxies) would have generated gravitational waves within that universe's lifetime. When the next universe exploded into being, these gravitational waves were converted into energy, ensuring their "fingerprint" bled through to the next universe. The pulse of energy caused by the transfer of gravitational waves from one universe to the next would have caused a kick to the distribution of dark matter, creating uniform, spherical patterns in the current universe. [Discovery News]

So what are we to make of this? I put it to cosmologist Paul Davies

, who says the question rests with inflation. "Penrose was always been a doubter of inflation," Davies says. "It's against the fashion of the moment, but that's fine. (And) if you abandon inflation, what happened before the Big Bang could leave an echo." That's because inflation would smooth out that echo. (Another possibility, he says, is idea of "incomplete inflation

," in which inflation could have existed but not been thorough enough to smooth out all echoes. That theory wouldn't require abandoning inflation to accommodate an echo in the microwave background.) However, Davies says, even if the finding is correct, this explanation for it—a black hole smash-up from before the Big Bang leaving its fingerprint after the Big Bang—isn't the only possibility. "People have been looking for concentric rings in the cosmic microwave background for a while," he says, because such a finding could support several different ideas. One of those alternate explanations plays on the idea of our universe being a "bubble" created by inflation; if two bubbles collided, he says, the result could leave a cosmic microwave echo. Lastly, he says, the source of the study makes it a tad suspect. "You'd expect people at the sharp end of the data to make an announcement like this. You wouldn't expect a mathematician." So I asked Charles Barrett, who was the lead investigator of WMAP, and in his reply email he too expressed skepticism:

"Unfortunately, the paper does not provide the necessary detail on how they performed their calculations. I am concerned that the noise properties and pattern of the WMAP instrumental sky sampling were not properly taken into account in their analysis. If these are not handled correctly then spurious results are likely. In my opinion, the paper should have specified the data analysis steps in detail, but it did not."

Penrose counters that he looked at not only WMAP but also data from a second mission, BOOMERang

, which confirmed the pattern he saw. At the moment, then, these huge claims about the nature of the universe are bogged down in competing calculations and critiques of calculations. The future of this question could lie with the Planck mission

by the European Space Agency, which is presently mapping the cosmic microwave background in greater detail than WMAP. In the meantime, we get to wonder. Says physicist Shaun Cole

"It's a revolutionary theory and here there appears to be some data that supports it. In the standard Big Bang model, there's nothing cyclic; it has a beginning and it has no end. The philosophical question that's sensible to ask is 'what came before the Big Bang?'; and what they're striving for here is to do away with that 'there's nothing before' answer by making it cyclical." [BBC News]

DISCOVER: If an Electron Can Be in Two Places at Once, Why Can't You?

Penrose thinks he knows the answer 80beats: So Long, WMAP, and Thanks for the Age of the Universe