Has the Sun Blown its Top? 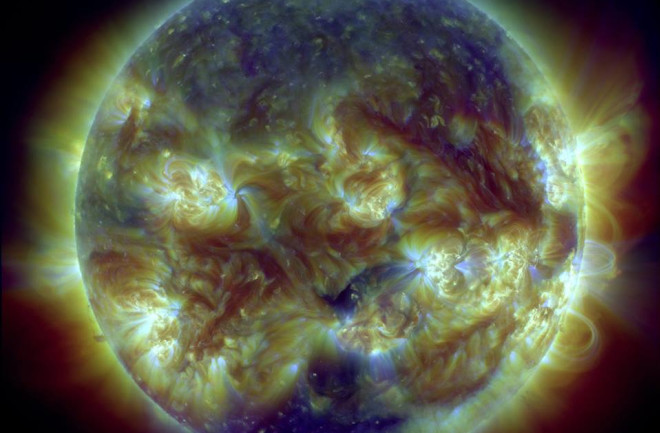 An image of the sun based on data gathered by NASA's Solar Dynamics Observatory on July 10, 2014. (Source: NASA Solar Dynamics Observatory) I spotted this image on the Facebook page for NASA's Solar Dynamics Observatory and found it so compelling that I had to share it. The brilliant arcing loops of hot plasma, and the roiling bright areas certainly caught my attention. But I was most intrigued by the two bluish, dark regions, especially the one atop the Sun. If you didn't know much about solar dynamics, you might guess that the Sun really has blown its top. And in a way, you'd be right — sort of. The dark areas are called coronal holes — places in the Sun's corona, or outer atmosphere, where magnetic field lines open out into interplanetary space, rather than loop back down toward the sun. This allows particles from the corona to escape more freely into space from these regions. Particles stream out into space from all over the corona at high-speed, creating the solar wind. But lately, more particles have been blowing outward from the top and bottom region. In fact, the rate of escape is three times faster than the slower wind elsewhere. So in these areas, the material is much less dense and relatively cooler, and thus much darker in the image. In this way, they really are "holes" — areas where the corona, which extends millions of miles into space, has blown off much more material than elsewhere and thus is much thinner. The image itself is actually a composite of three views, each showing features of the corona at different temperatures (which range from 1.8 million degrees to 3.6 million degrees F). In contrast to the dark coronal holes, solar flares and coronal mass ejections appear bright in the image. Also visible are bright coronal loops — hot plasma arcing off of the Sun along magnetic field lines. For more details about coronal holes, see this detailed post by Discover contributor Cory Powell.