Has life on Titan been discovered? No. 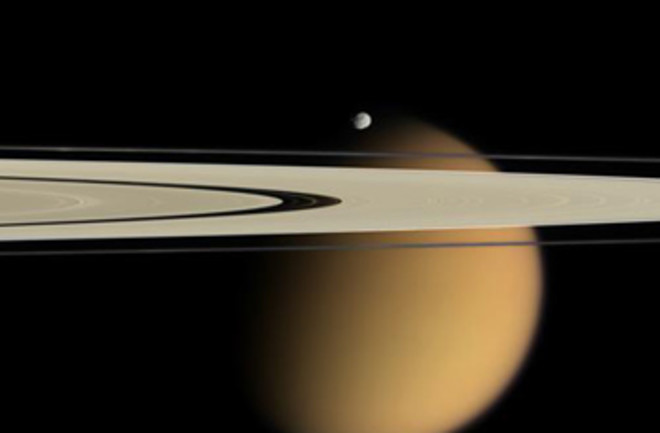 There has been a bit of an uproar the past day or so that scientists have found evidence of life on Saturn's giant moon Titan. As soon as I saw the press release I knew this was going to be a problem. So let's be clear: First, have we found life on Titan? No. Have we found evidence that there might be life on Titan? Sorta. The results are preliminary and not yet confirmed; in fact, some of the evidence is from computer modeling and has not been directly observed. Bear in mind as well that evidence is not proof. Evidence just means an observation was made that is consistent with life on the moon, but doesn't say much else. There are non-biological explanations for the observations as well. Of course, speculation is running rampant, so much so that Chris McKay, an exobiologist who studies Titan, has released an article clearing things up. First, a little background. Titan is a monster, the second biggest moon in the solar system at 5150 km (3200 miles) in diameter. If it weren't orbiting Saturn, it would probably be considered a planet in its own right: it's bigger than Mercury and Pluto. It has a thick atmosphere, made up of nitrogen, methane, and other molecules. It's very cold, but it's known that lakes, probably of liquid methane, exist on the surface. Five years ago, McKay and other scientists pointed out that if methane-based life existed on Titan, it might be detectable through a surface depletion of ethane, hydrogen, and acetylene. New observations show that this is the case; there are lower amounts of these substances than the chemistry of Titan would indicate. As McKay points out, "This is a still a long way from 'evidence of life'. However, it is extremely interesting." Those are the basics. Go read McKay's article for details. The point he makes is that the results are preliminary, may yet turn out to be wrong, if they're right may have non-biological explanations, and we should not conclude biology is involved until we get a lot more evidence. As far as the media goes, headlines get eyeballs and sell advertisements, of course. But in cases where the news is like this, news outlets should be particularly careful how they phrase things. They know how the public will react to certain phrases, and the phrase "evidence of life" is substantially less accurate and more likely to incite chatter than "evidence for possible life" -- and the Telegraph's technically accurate but seriously misleading "evidence 'that alien life exists on Saturn's moon'" is just asking for trouble. The point is, when it comes to media outlets and big news like this, the phrase going through your head should be a variant of an old one, updated for this modern age: "Don't trust, and verify".