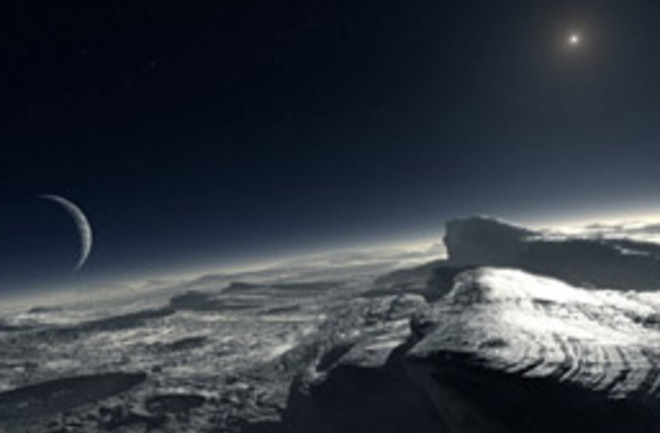 Today, December 29, 2009, the New Horizons Pluto probe crosses an arbitrary but psychologically important line: it is now closer to Pluto than it is to Earth. If there were people on board the small interplanetary probe, no doubt they'd be popping champagne. I'm sure that back on Earth, the team behind NH are pretty happy. This probe has a checkered history, having been planned, canceled, re-planned, delayed, on and on. It's amazing it got to launch at all. But on January 19, 2006 the small, half-ton probe was sent on its way, and on July 14, 2015 it'll sail past Pluto and its collection of moons, snapping pictures and taking data. Today marks the official halfway point, where New Horizons has half its path already behind it. Here's a plot of its distance to Earth (in blue) and Pluto (red) care of the New Horizons site:

Distance in the graph is measured in Astronomical Units (a yardstick used by astronomers for convenience; it's the distance of the Earth to the Sun, about 150 million km (93 million miles)). The distance to Earth is wiggly because the Earth goes around the Sun as New Horizons moves out, and the distance to Pluto decreases steadily as the spacecraft catches up on its journey. Where the two lines cross is where the distances are equal, and that's now, today! You may be wondering about the timing: New Horizons is halfway in distance to Pluto, but the mission timeline halfway point isn't until October 16, 2010 (if I've done the math correctly). The probe was launched at high speed, slowed down due to the Earth's and Sun's gravity, picked up a kick from Jupiter in early 2007, and has been slowing ever since. Since it was moving faster before, it reached the distance halfway point before the schedule halfway point. New Horizons is now 16.37 AU - 2.449 billion km, or 1.522 billion miles -- from home. But maybe now, home is no longer Earth. Once it crossed that line today, home became deep space. Even Pluto and its moons Charon, Nix, and Hydra are only milestones for it. It won't be stopping when it gets there; New Horizons will sail on by, continuing into deep space. It'll become one of several other spacecraft we've sent out of the solar system itself, set to wander interstellar space forever. That is, unless one day we catch up to them ourselves. I imagine in a few hundred years they'd make fine museum pieces. Or maybe, if poetry still exists in humans all those far-flung centuries from now, we'll let those probes continue on. I rather like that idea better.

You can follow the New Horizons probe on Twitter, which is how I found out about this milestone today.

More From Discover
The Sciences
Reach Across the Stars: New App Offers Interactive Exploration of Women in Astronomy
The Sciences
Gravitational-Wave Observatory Obtains Mass of Discoveries
The Sciences
How an Astronaut Sleeps in Space
The Sciences
Analysis of Mars Audio Reveals Different Rules for Sound on the Red Planet
Planet Earth
Largest Marsquake Ever Recorded by InSight and It Could Be The Lander's Last Big One
Technology
First Human Landing On An Asteroid by 2073, Say Scientists
Recommendations From Our Store
My Science ShopDiscover STEM Kits
My Science ShopDiscover 2022 Calendar
My Science ShopStrange Science
My Science ShopElements Flashcards
Shop Now
Stay Curious
Join
Our List