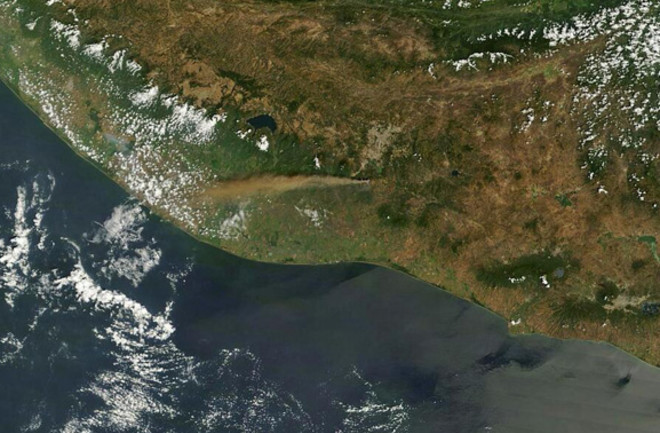 Terra image of the plume from the March 2 Pacaya eruption -- the brown plume spreading to the west. Image: NASA / Nahum Charazza - Twitter. Over the weekend, Pacaya in Guatemala got everyone's attention with a moderate explosive eruption. This explosion was nothing compared to the really big bang we saw last month at Indonesia's Kelud, but it was enough to cause some real concern in Guatemala. The March 2 eruption produced a fire fountain that reached 800 meters tall at the summit (check out the image below) and an ash plume that topped out at ~3 km (10,000 feet) above the sea level (so ~2.4 km / 8,000 feet above the volcano). The day was clear, so we got a nice shot of the eruption on the Terra (see above), with the dark brown plume of ash spreading in a narrow band to the west. Ash from the eruption was noticeable as far as 15 km from the volcano and due to this new explosive event, CONRED raised the alert around Pacaya to Yellow (2 out of a scale of 4) and the plume was easily seen from Guatemala City, which is only about 50 km away from the volcano. The eruption also prompted some flight diversions due to the ash plume.

The eruption of Pacaya in Guatemala, seen on March 2, 2014. The lava fountain (reddish) can be seen at the summit vent. Image: CONRED. The unrest that started on Sunday is continuing, with more explosions, eruptions and earthquakes, so evacuations are underway for people living close to the volcano. The latest CONRED report mentions lava flows on the western part of the volcano that have travelled 1200-1300 meters downslope while explosive activity has waned some to only small explosions at the summit vent. From the looks of the images and descriptions, this eruption is another energetic strombolian eruption typical for Pacaya. It is a volcano that behaves is ways very similar to Italy's Etna, where basaltic lava eruptions as fire fountains or lava flows. This new eruption is part of a period of activity that began in March 2013, but this explosion was larger than what had been seen so far. However, the previous period of activity from 2004-10 did feature some eruptions as vigorous as the March 2 event. As a sidenote, I did notice that CONRED includes this sentence at the bottom of their statement on the eruption: "

The general population is advised to be alert to indications that authorities release through the media, avoid spreading rumors, avoid risking your life, take the directions of the authorities..."

(emphasis mine). I think this is an especially important message to get across in this age of social media.