Researchers are keeping a close eye on these spherical flames. Their findings could help both astronauts and the earthbound. 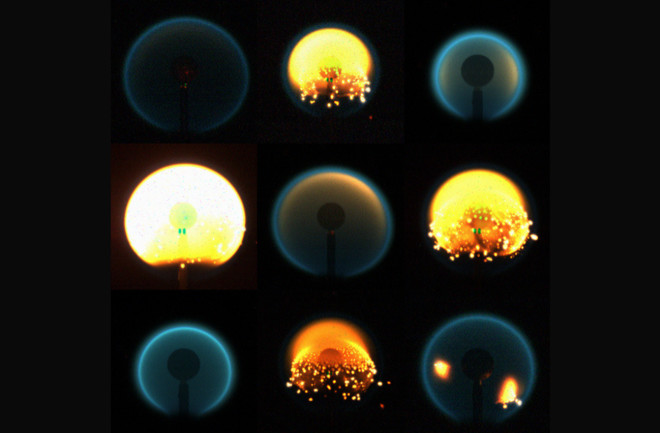 A composite of flame images from nine different tests of NASA's Flame Design experiment, conducted in June and July 2019 on the International Space Station.(Credit: NASA)

Given that it’s one of humanity’s oldest tools, you might assume we know all there is to know about fire. And sure, we know a lot: As hot air near the base of a flame rises, gravity pulls in colder, denser air to replace it. It’s this cycling of air that provides fresh oxygen and gives flames their characteristic teardrop shapes.

But in a microgravity environment, like the one astronauts experience while in orbit, all bets are off. Here, hot air still expands outward — but it doesn’t move upward, because there is no “upward.” Instead, fires in space are fed only by the random oxygen molecules that stumble into them by chance.

Read more: The Biggest Space Missions to Look For in 2023

It’s a process called molecular diffusion, and it produces spherical flames that are different from their Earthly counterparts in more ways than one. Not only do they burn much slower and for longer periods of time, but they also survive on less oxygen and clock in at less than 900 degrees Fahrenheit — a fraction of the heat given off by most terrestrial flames.

And yet, there’s still much scientists don’t understand about how fire operates in microgravity. Are certain materials more flammable than others? What’s the best way to extinguish a rogue flame?

These questions are critical for the safety of astronauts already living and working in the International Space Station (ISS), and will only become more important as humans prepare for longer space voyages. Luckily, NASA scientists are on the case.

To be clear, the threat is not merely a hypothetical one. In 1997, for example, a fire ignited aboard the Russian space station Mir; it originated in an oxygen generator, filling the station’s modules with toxic smoke and cutting off access to an escape vehicle during the several minutes it lived.

One of the reasons fire is so dangerous in space is its lack of predictability. Unlike on the ground, where gravity forces flames upward, flames in a microgravity environment can spread in any direction at all. The same goes for smoke, making the placement of smoke detectors in a space station (typically on the ceiling in most buildings) much more difficult.

Though the Mir crew quickly doused the errant flame with a fire extinguisher, preventing its growth, extinguishers that use gases to snuff a flame are less effective in space than on Earth. For one, the apparatus can literally fan the flames of a fire by directing air — and therefore, oxygen — toward it.

In the end, the flame extinguished itself only when the oxygen generator had emptied. Over the next several hours, the station’s life support systems cleared Mir’s atmosphere of all smoke, and the crew escaped the incident without significant damage to either themselves or the station’s structure.

OK, so we’ve established that sealing up these gaps in our knowledge about fire’s behavior is clearly important. Now, how exactly do scientists do that?

Well, in 2008 NASA created their Combustion Integrated Rack (CIR) and sent it to the ISS. Used to safely fiddle with controlled combustions in microgravity, its hardware includes a 26-gallon combustion chamber and five different cameras that have been put to good use in thousands of tests over the past 15 years.

Many of those tests were part of the Flame Extinguishment Experiment, or FLEX, which began about a year later. As the name suggests, these revolved around putting out fires in space and ultimately improving fire suppression systems on future spacecraft. With the help of CIR, researchers aboard the ISS would ignite tiny droplets of either heptane or methanol fuel and record the results.

Read more: What Is Space Junk And Why Is It A Problem?

Daniel Dietrich, a scientist at NASA’s Glenn Research Center, told the administration that “one of the biggest discoveries, not only in the microgravity program, but in probably the past 20 [to] 30 years of combustion research has been during the FLEX experiments on the space station.”

The discovery in question? After certain liquid fuels are extinguished in space, they spontaneously reignite. In these cases, the subsequent flame — called a “cool flame” — burns at lower temperatures and is invisible to the naked eye.

Scientists aren’t sure exactly why this happens, but from a practical point of view, we could use such low temperature combustions hypothetically to produce fewer air pollutants in diesel engines back on Earth. We’re far from that reality, though research conducted in June 2021 took another great leap when it repeated the phenomenon using gaseous fuels, rather than liquid ones.

Arguably the best part of studying flames in space, however, is that the lack of gravity just … makes things simpler, in a lot of ways. Whereas the candle on your coffee table may flicker, for example, as a result of buoyancy-driven instability, this isn't the case in microgravity.

Another series of NASA studies, the Advanced Combustion via Microgravity Experiments (ACME), took advantage of this to really dig into what makes a good flame — one that is efficient but doesn’t give off a ton of pollutants like soot. Beginning in 2017, ACME scrutinized more than 1,500 flames in the CIR, over the course of more than four years.

A flame ignited in microgravity as part of the ACME investigation. The yellow spots are soot clusters. (Credit: NASA)

The next step in NASA’s research is SoFIE, or Solid Fuel Ignition and Extinction. This set of experiments, launched to the ISS in February of 2022 and expected to continue until 2025, will help the administration choose the best fire-retardant materials and designs for "spacesuits, cabins and habitats."

A whole host of materials is in line to be tested, including plexiglass and cotton-based fabrics. Afterward, SoFIE’s results will even be applied to mathematical models that forecast how those same materials might burn in conditions outside of microgravity — including on the moon, Mars or elsewhere in our solar system.

But we aren’t stopping there: The results could be felt all the way back on Earth, if they potentially revamp fire-safe materials for our homes, offices and aircraft. You might say it's NASA's version of fighting fire with fire.