Once LIGO is reborn as Advanced LIGO, spotting the remnants of black-hole collisions should be a routine affair.

When two black holes collide, the event vibrates the fabric of space-time, creating ripples called gravitational waves that resonate across the universe. In fact just about every moving object stirs up such waves, according to Einstein’s general theory of relativity. But so far, no one has managed to observe them directly. Doing so requires the ability to measure changes in distance on the order of one-thousandth the diameter of a proton as passing waves stretch and compress local space—one of the most delicate measurements in all of science. 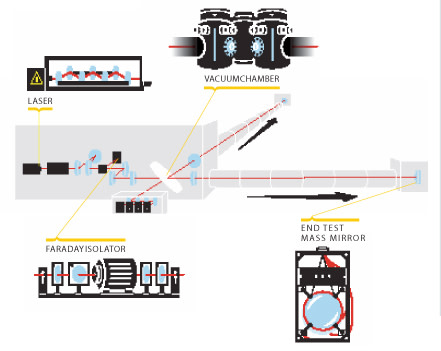 That is where two giant facilities in Louisiana and Washington state come in, operating together as the Laser Interferometer Gravitational-Wave Observatory (LIGO). At each of the facilities, a laser shoots a 35-watt infrared beam through a Faraday isolator, which directs and polarizes the light. The beam then enters a vacuum chamber where a partially-silvered mirror splits it in two, sending each half down one of the L-shaped system’s 2.5-mile-long arms. The beams bounce around a system of mirrors about 75 times before returning to the splitter. Normally, the split light waves fall out of sync on their journeys and so cancel each other out when recombined. When a gravitational wave moves through the detector, though, it should stretch one arm of LIGO while shortening the other, changing the path of the beams and causing the rejoined waves to produce a detectable pattern of light.

Since 2005 LIGO has tuned in to a small portion of the universe, to no avail. But last October the experiment was suspended for a major upgrade, including a new laser 20 times as powerful as the current model. When it goes back online in 2014, LIGO will be able to scan a swath of sky 1,000 times bigger. “Instead of having a few percent likelihood of seeing a signal in a year, we should see a signal once a week or once a month,” says Caltech physicist Jay Marx, LIGO’s executive director.