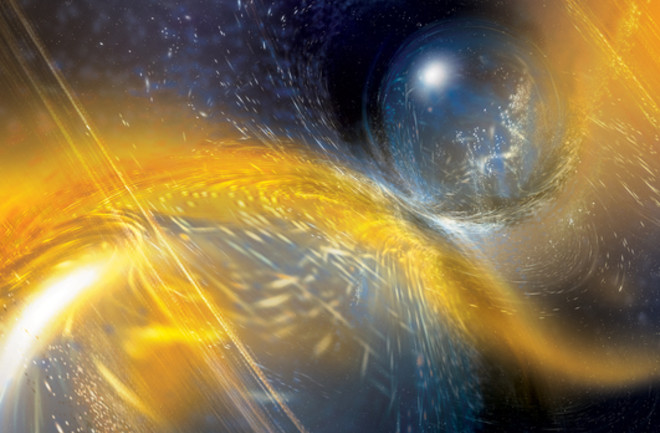 For just the second time, scientists have used gravitational waves (ripples in space-time) to detect the merger of two colliding neutron stars. The neutron stars — each fitting roughly the mass of the Sun into a city-sized space — have a combined mass greater than any other pair of neutron stars ever observed.

“From conventional observations with light, we already knew of 17 binary neutron star systems in our own galaxy and we have estimated the masses of these stars,” said Ben Farr, a LIGO team member from the University of Oregon, in a press release. “What’s surprising is that the combined mass of this binary is much higher than what was expected.”

After the collision of these two particularly hefty neutron stars, researchers say the final merged product was likely massive enough to collapse into a black hole, gobbling up any stray matter and light located nearby.

The first gravitational-wave detection of merging neutron stars, called GW170817, made history back in 2017. It was first time astronomers spotted both gravitational waves and light from the same cosmic event — the dawn of an era of so-called “multi-messenger astronomy.”

However, because only one of three LIGO-Virgo detectors picked up this most recent merger — which occurred on April 25, 2019, and is dubbed GW190425 — researchers were unable to pinpoint its precise location. This prevented them from spotting any light that it may have released. Of course, that’s if it even released any light in the first place.

According to a slide presented by Katerina Chatziioannou on Monday at the 235th Meeting of the American Astronomical Society, “the individual masses are consistent with neutron stars, but the pair of them is more massive than all known neutron star binaries.”

Because of the unexpectedly large size of the neutron star merger’s final product, Chatziioannou went on to add that they cannot rule out more exotic scenarios for this system. For example, it instead could be an example of two small, stellar-mass black holes merging together to form a slightly bigger black hole.