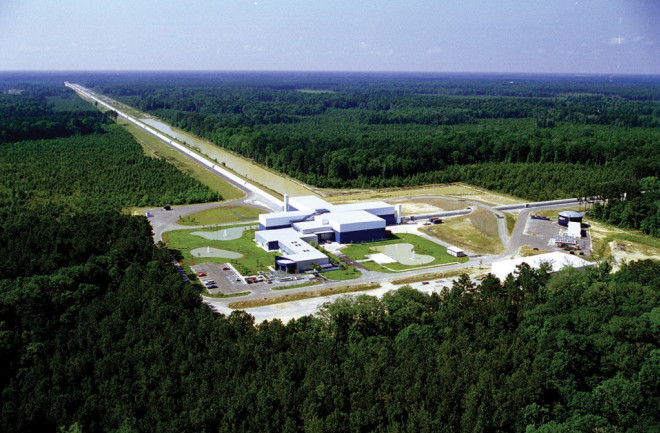 The LIGO detector in Livingston, Louisiana. (Credit: LIGO Collaboration) The massive collaboration of scientists that's hunting gravitational waves—with a lot of success—is set to make another big announcement on Monday. A flurry of press releases this week have teased the news, which is set to break on Oct. 16, although they've been short on details. At 10 a.m. Eastern, a team from the groundbreaking gravitational wave detector LIGO will make an announcement at the National Press Club in Washington D.C. They'll be joined by researchers from Virgo, LIGO's Italian counterpart, and simultaneous briefings are planned in Germany and the United Kingdom. It's likely to be something more exciting another detection — the last was announced on Sept. 27 without nearly as much fanfare. Crucially, though, that detection marked the first time Virgo and the pair of LIGO detectors caught a gravitational wave at the same time, allowing them to roughly triangulate its position of origin in the sky. Gravitational waves from merging black holes don't leave traces that could be seen by conventional telescopes, but collisions involving other massive bodies might. If we could catch the event that produced a gravitational wave with a conventional telescope, it would give scientists a lot more information as to what happens during the fractions of a second when two massive bodies merge. We'll be waiting till Monday to find out what happened. Scientists plan to livestream the announcement on Monday, and you can watch it all right here: https://www.youtube.com/watch?v=AFxLA3RGjnc Monday, given the organizations involved, will probably mark the fifth gravitational wave detection in the last year or so. LIGO made history in February of 2016 when scientists presented the first evidence of a successful detection. Gravitational waves are the literal stretching of space-time caused by immensely powerful events far away in the universe. They were first predicted by Albert Einstein as a corollary to his 1915 general theory of relativity, though he doubted we'd ever discover direct evidence of them. Download our free e-book on gravitational waves here