Grandmothers Are Evolutionarily and Biologically Unique

Humans are one of the only animals that experience menopause. Multiple hypotheses try to explain why and highlight the extraordinary role (and benefits) of the human grandma. 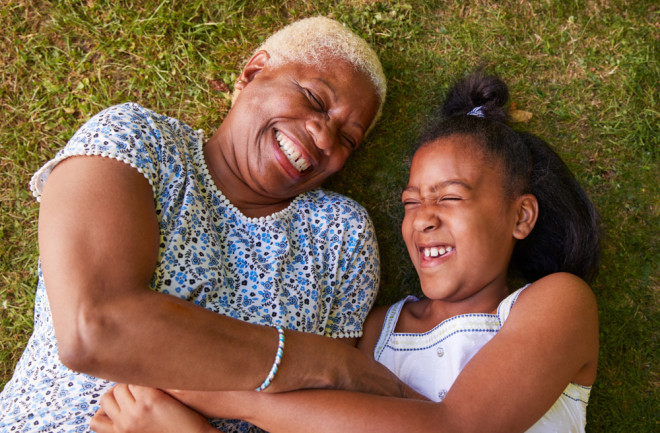 Humans share a unique trait with just a few other species: We have grandmas who care for us. While most female mammals keep breeding until they keel over, only whales, elephants and giraffes forgo having their own children to help raise the next generation.

For a human with a female reproductive system, the ovaries typically contain at least a million eggs at the time of birth, reduced from about five times that number in the fetal state; and the egg count continues to dwindle after birth. When most child-bearing women hit their late 40s, egg numbers nose-dive, triggering menopause at around the age of 50.

Menopause is puzzling because, from an evolutionary perspective at least, the aim of the game is to reproduce. So why does nature prematurely switch off reproduction in half of the population?

One answer lies in what is known as the “grandmother hypothesis,” the idea that a post-reproductive female can provide an extra pair of hands to support her daughter, who can then have more children. Each grandchild, after all, will inherit approximately a quarter of their genes from that grandmother. So she can continue sowing her genetic material long after having children of her own.

The theory, steeped in gender politics, is not without controversies. Some scientists claim that menopause is simply an artifact of an extended lifespan while others suggest that infertility later in life results from men being more sexually attracted to younger women. Such male-centric theories have faced plenty of backlash.

The first solid evidence for the grandmother hypothesis came from anthropologist Kristen Hawkes in the late 1980s. She was studying the Hadza, a hunter-gatherer community in northern Tanzania, and found that the presence of a grandmother boosted a child’s chances of survival. Similar patterns have been uncovered in 17th- and 18th-century church records of French settlers in present-day Quebec. At the time, the Catholic clergy kept a fastidious eye on their parishioners, logging their births, marriage and deaths. Mining this huge dataset, researchers revealed that women whose mothers were still alive gave birth to more children, more of whom survived to adulthood. The closer these women lived to their mothers, the greater the chances of grandchild survival.

Surviving in such times was a struggle. On average, women had eight children, half of which would die young. In times when food was scarce and disease was rife, both women reproducing at the same time would have increased the chances of child mortality. This is particularly true for humans, who give birth to children with helplessly underdeveloped brains.

According to some biologists, genes that avoid generational overlap in childbirth were favored by natural selection. This may explain the sudden plunge in the number of eggs in a woman between the ages of 40 and 50. The biological phenomenon would cause infertility in the older generation as their offspring start bearing their own children.

So why do older women give up having children instead of the younger generation? In bees and naked mole rats, for example, it is the sterile, younger female workers that assist older, established breeding adults.

The human dynamic can be explained in terms of “female-biased dispersal,” says Nichola Raihani, a professor of evolution and behaviour at University College London in the UK. Within hunter-gatherer societies, a woman would leave the group to live with her partner’s family when she reached reproductive age, says Raihani. This “sets up a potential conflict of interest with herself and the mother-in-law. If they both try to breed, alongside one another, then all of the offspring will suffer.”

The winner of the baby battle depends on the genetic stake each woman has in the potential offspring. For the older woman, she will be related to her biological grandchildren by a quarter, on average. Whereas the younger woman will share no DNA with any of the older woman’s children. “This is called relatedness asymmetry,” Raihani says, “and it weakens the mother-in-law’s hand because she is slightly disincentivized to breeding if it means she will harm her grandchildren, while the younger female is not disincentivized in the same way.

Over time natural selection may have favored women who become infertile just as their offspring start to have children of their own, forcing them to bow out of the battle for reproduction. Unlike other mammals, whose reproductive lifespans mirror their actual lifespan, reproduction in human females became disentangled from longevity.

Grandmothers not only provide extra sets of hands but a wealth of accumulated wisdom. In rural Ghana, for example, grandmas disseminate advice on pregnancy, breastfeeding and treatment options, acting as surrogate healthcare providers in regions where medical assistance is hard to come by. Similarities have been noted in menopausal killer whales, whose ecological knowledge helps the group locate salmon when food is scarce.

The advantages of having a grandma are still apparent today; youngsters with involved grandparents have greater wellbeing and improved academic performance.

It’s easy to forget that for much of human existence, children were cared for by their grandparents, as well as neighbors, cousins and older siblings, Raihani says. In contrast, she points to the guilt that women sometimes feel in today’s modern world when they accept outside help, or how stressed many parents felt while solo-parenting during the pandemic. “Finding that situation challenging is not surprising when you consider that it is such an anomalous situation for our species. It is easy to forget that.”