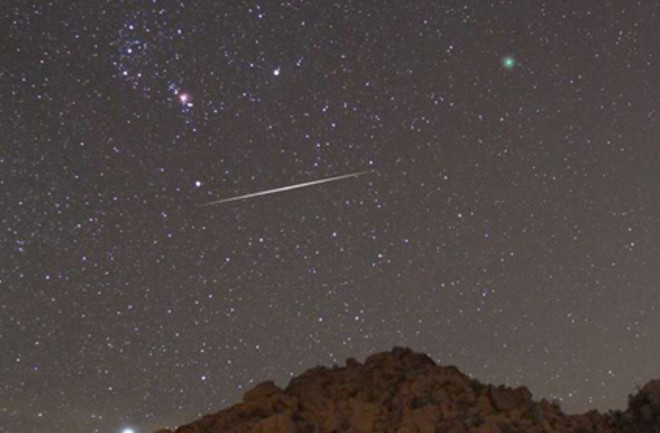 Another great night for stargazers has arrived as the annual Geminid meteor shower reaches its peak tonight (Monday) and into Tuesday morning.

Although many people consider it to be a poor cousin to August’s Perseid shower, the Geminids often put on a better show. This year, observers can expect to see upward of 100 “shooting stars” per hour — an average of nearly two per minute — under a dark sky. [Astronomy]

If clear skies prevail, it should be an ideal year for gazing at this shower—so named because the meteors appear to emanate from the constellation Gemini

This year the Geminids are predicted to peak on Tuesday morning around 1100 GMT, more or less. That's excellent timing for North America, especially out west. The moon that night is only a day past first quarter and sets around midnight or 1 am local time, depending on where you live. [New Scientist]

showers, which appear in the sky earlier each year and result from the Earth passing through the debris trail of a comet, the Geminds don't have such a clear explanation. The meteors can be traced to an asteroid called Phaethon. Perhaps Phaethon is the iceless remainder of a former comet that has now lost its ice, but not everyone buys that hypothesis.

Indeed its spectrum links it to the large asteroid Pallas, 544km [338 miles] wide. Were Phaethon and other so-called Palladian asteroids blasted from Pallas in some ancient collision? And where does the dust in Phaethon's orbit, our Geminid meteoroids, come from? One theory, backed up last year by observations of Phaethon as it passed through perihelion only 21 million km from the Sun, is that the Sun's intense heat can cause Phaethon's rocks to shatter, with the fragments able to escape Phaethon's feeble gravitational pull to replenish the Geminids stream. [The Guardian]

Related Content: 80beats: Take a Look up at the Leonid Meteor Shower This Week

80beats: Perseid Meteor Shower: Where & When to Catch the Sky Show