"Goldilocks" Black Hole Is Neither Too Big Nor Too Small 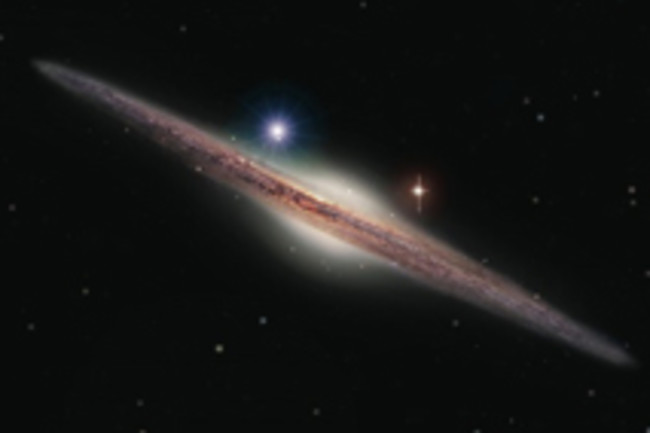 Astronomers believe they've found something never before detected in the universe: a black hole of intermediate size. And while that may not sound thrilling to the layman, researchers are thrilled by the discovery of the so-called “Hyper-Luminous X-ray Source 1,” which is poised at the edge of galaxy ESO 243-49. Astronomers are excited because they've seen plenty of small black holes and large black holes, but experts had questioned whether a medium-sized variety could exist.

These middleweights, at about 500 times the mass of the sun, could represent a missing link between common stellar black holes, created by the death of a single star, and the supermassive variety that can pack the mass of millions or even billions of suns [SPACE.com].

black holes, between three and 20 times the mass of the sun, are created when big stars collapse and leave behind a gravitational pull strong enough to block nearby light rays. Researchers have speculated that super-massive black holes result from the successive fusion of many smaller black holes. But without finding evidence of a medium-size hole, it was a tough theory to prove [Wired.com].

Supermassive black holes are of particular interest because they lurk at the hearts of most galaxies, and may play an important role in galaxy formation. The new findings, reported in Nature, are based on blasts of X-rays detected from the edge of that distant galaxy, which is situated about 290 million light years away.

Even though a black hole's gravitational pull precludes the escape of radiation from its grasp, emissions, in this case x-rays, from the material falling rapidly into a black hole can reveal its existence [Scientific American].

The amount and the pattern of that radiation is consistent with a black hole about 500 times the size of our sun, though researchers say they haven't yet proved beyond a shadow of a doubt that a black hole is the source of those X-rays. But even if researchers do on to prove that they're looking at a Goldilocks black hole, more questions will remain.

"If they exist, it's not at all clear where they came from," [comments astronomer] Christopher Reynolds.... It's possible that small black holes that formed within a densely packed stellar cluster could merge into a midsize variety. Or, intermediate-mass black holes could be leftovers from the very earliest stars in the universe, which scientists think were much larger than today's versions [ScienceNOWDaily News].

Related Content: 80beats: We Knew Black Holes Were Massive. Now Double That. 80beats: Chicken-or-Egg Problem: Did Black Holes Form Before the Galaxies That Surround Them? 80beats: Two Stars Are Born Near the Perilous Edge of a Black Hole 80beats: Confirmed: Monstrous Black Hole Lurks in Our Galaxy’s Center 80beats: Researchers Look Into a Black Hole (But Does The Black Hole Look Back?) Image: Heidi Sagerud

Where Is the Edge of the Universe?

The SciencesThe Horsehead Nebula in Orion: An Unbridled Look
Recommendations From Our Store