Go Over to the Darker Side

Head up to Alberta, Canada, to take part in this festival celebrating all things astronomical. 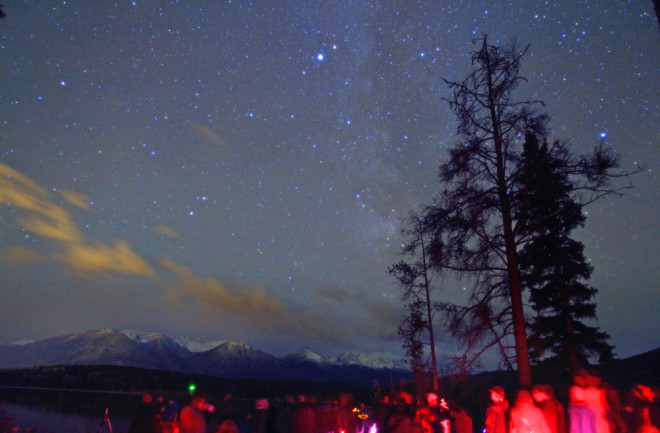 North America loses 6 percent of its dark skies every year — but you’d never know it at Jasper National Park Dark Sky Preserve’s annual festival. During the week-plus celebration of the night sky, the preserve — the world’s second largest at 4,335 square miles — attracts hundreds of visitors from across the continent to celebrate all things astronomical. “There’s nothing like this in North America,” says Peter McMahon, a space journalist and self-described wilderness astronomer. “It’s kind of the Disney World of dark-sky preserves.”

A constellation of activities: The lineup for Dark Sky Festival 2014 includes the “Symphony Under the Stars” concert performed by the Edmonton Symphony Orchestra, a night-sky photography workshop, inflatable planetariums, and presentations from astronomy educators and authors — and don’t forget the docent-led star parties, among other events.

Ground Control to Major Speaker: One of the brightest stars visible at this year’s fest arrives on two legs. Former International Space Station Commander Chris Hadfield (a YouTube sensation, thanks to his cover of David Bowie’s “Space Oddity” while aboard the ISS) will be the headline guest and speaker.

The Milky Way lives up to its name when it’s observed through telescopes or even with the naked eye in Jasper National Park Dark Sky Preserve. (Credit: Jeff Bartlett)

Through a Glass, Darkly: Typical city skies rate an 8 or 9 on the Bortle Dark-Sky Scale, the astronomer’s yardstick of darkness. Jasper National Park ranks as a 1 or 2, which means that features usually seen only through a telescope become visible with the naked eye, such as the Andromeda galaxy and all seven sisters of the Pleiades star cluster.

From Dawn to Dusk: When you’re not stargazing, try your luck at wildlife watching (including caribou) along more than 600 miles of hiking trails at the park. Feeling brave? Take a stroll on the new glass-bottom Glacier Skywalk that’s suspended 918 feet above a canyon.

Go: Jasper National Park Dark Sky Preserve is about 200 miles west of Edmonton and the nearest commercial airport. There’s also train service to Jasper from Vancouver and Edmonton, if you want to travel the scenic way. For those without a car, Tourism Jasper offers free shuttles from town to some of the festival’s events. Just make sure to bundle up: October nighttime temperatures can dip below freezing.

Go Deeper: Want more? Whether daytime sightseeing or nighttime stargazing, take a drive to Pyramid Island, Maligne Lake or Athabasca Glacier. Just make sure to check the astronomer’s forecast for “Jasper Maligne Lake” or “Jasper Athabasca Glacier” for a peek at cloud cover and transparency, as well as sun and moon data, before you set out.

This article originally appeared in print as "Go Over to the Darker Side."