I just got word from Steve Ritz, the Project Scientist for GLAST (the Gamma-Ray Large Area Space Telescope), that it's ready for launch! Woohoo! GLAST will study extremely high energy light emitted by some of the most violent events in the Universe: exploding stars, gamma-ray bursts, black holes gobbling down matter, and even from solar flares and maybe, just maybe, from dark matter, too (one form that DM may take will emit gamma rays when two particles of it collide). The earliest GLAST can go is June 3. Here's a shot from the NASA GLAST page (where you can get more info) showing GLAST being mated with the rocket that will take it into space. 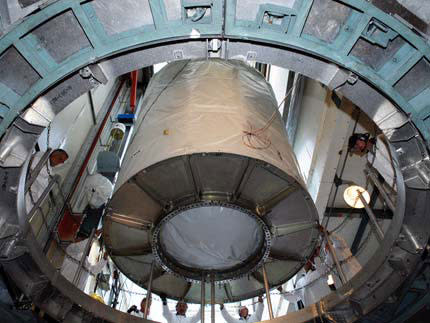 This is terribly exciting. I worked on the education and public outreach for GLAST for six years -- it was what funded my move out to California, back in December 2000. I wrote a vast amount of words for that project, and along with my teammates gave dozens of workshops to hundreds of teachers across the country. I never touched the hardware; I never even saw it. But still, a piece of me will go up on that rocket in June. Pieces of lots of other people too. I've been able to watch twice as projects with which I've been involved have rocketed into space (STIS on board Hubble, and then Swift), and GLAST will make three. This will be amazing. After the successful landing and testing of Phoenix, GLAST promises to make this a great time for robotic exploration. Later on, nearer to launch, I'll write more about this project; but check out the links above or my earlier posts about it to satiate yourself for now. GLAST will revolutionize gamma-ray astronomy.