The Gamma-ray Large Area Space Telescope, a satellite observatory designed to -- guess what? -- measure gamma rays, just launched on a Delta II rocket from Cape Canaveral. There were a few last-minute radar issues, but things seem to have ultimately gone off without a hitch. There is a launch blog here (naturally), and Phil Plait has been covering the mission in detail; there was a nice article in symmetry, and they also have a live blog. "Vehicle performance continues to look nominal..." You have to love scientists. 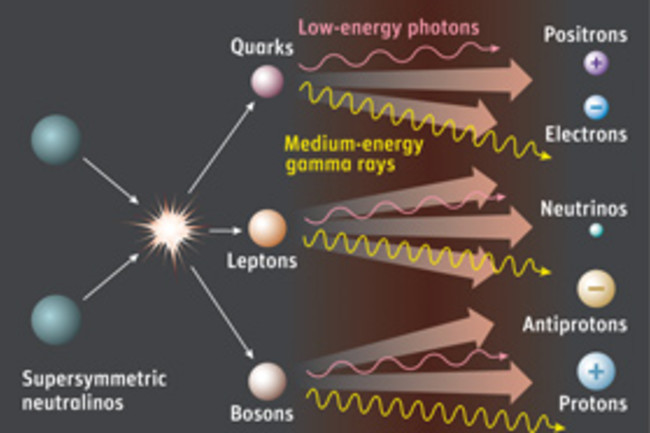 GLAST will be doing a variety of cool things, but there is one goal that stands out as uniquely exciting for physicists: it will be searching for dark-matter annihilations. If the dark matter consists of weakly interacting massive particles, they can come together and annihilate into a cascade of lighter particles. (Image from Sky & Telescope.) Among the particles produced are very high-energy photons: gamma-rays. Those are what GLAST will be looking for, a process known as "indirect dark-matter detection," in contrast to direct detection where a dark-matter particle bumps into an experiment here on Earth. Of course, dark matter doesn't annihilate very often, or it all would have gone away by now. The interactions are very infrequent, so you're most likely to see the gamma-ray signature in areas of high dark-matter density, such as the center of our galaxy or in clusters of galaxies. (The number of annihilations goes as the density squared, so you get a lot more in crowded regions.) We can imagine a future in which dark matter is no longer considered "dark," so long as you look in the right part of the spectrum, and we use combinations of techniques to map out the dark matter distribution throughout the universe. Cosmologically speaking, the 21st century is going to be the Dark Ages, but in a good way. It's not all that easy, of course -- sadly, there are other sources of gamma-rays in the universe other than dark-matter annihilations. It's going to be a task to know for sure whether some individual source of gamma-rays is produced by DM annihilation or some more prosaic mechanism, such as an active galactic nucleus. Apparently, there are people ("astronomers") who like to study those sources for their own sake, so it's not a total loss. One way or the other, GLAST is going to be looking at the universe in an exciting new way.